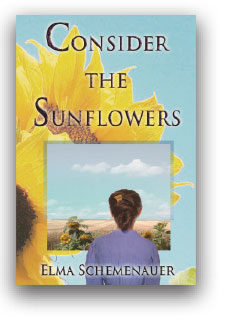 Tina Janz, her father Obrom, and Roland Fast, the man Tina’s father wants her to marry, are caught in a Saskatchewan blizzard. My senses are so alive as I jump into the first scene of the story that I shiver in the biting wind and pelting snow, fearful of the disappearing fence posts that are supposed to lead these people to safety. An apt beginning to a book about troubled relationships that eventually heal enough to allow for hope. “Fresh challenges send them stumbling toward a new understanding of love, loyalty, faith, and freedom,” writes Schemenauer.

Tina does not want to marry “rich, boring Roland Fast,” because she is in love with dark, handsome Frank Warkentin, a half-Mennonite, half-Gypsy [sic] much maligned in the Mennonite community of Dayspring in the municipality of Coyote, Sask., in 1940. Tina’s parents only want the best for her, but she has a mind of her own. She’s sure that if she can marry Frank, he will fulfill her purpose in life.

Frank is attracted to Tina partly because she is proper, something he secretly aspires to be. Haunted by his mother’s desertion in childhood, he reacts to the meanness of those around him with distrust and anger. This burden proves a considerable obstacle to his happiness and the achievement of his inner goals, in his own life and in his marriage.

The treeless prairie of southern Saskatchewan mirrors the dreary isolation Tina feels, yet also offers a hint of hope for something better ahead. In the desolate landscape and in the lives of the characters, a subtle beauty and joy waits to be found.

The people of Dayspring still remember their homeland in Russia before immigrating to Canada, and “Hitler’s War” is constantly in the news. Consequently, these Mennonites are suspicious of outsiders and remain resistant to infiltration by “English” people.

The book is hard to put down, with tension-filled chapter endings and well-crafted flashbacks, as well as a tightly wound plot.

Elma Schemenauer, seasoned author and editor of more than 70 books, enriches this difficult story with figurative language apropos of the farming community of the 1940s: “Sunlight was spilling across the snowdrifts like broken egg yolks,” and “more wide awake than a pig the day before a sausagemaking festival.”

Schemenauer has included an appendix with an impressive, comprehensive timeline at the end of the story that follows the Mennonites from their inception in 1525 to the present. She also includes a study guide for readers. Her novel is an excellent work worthy of recommendation.

Janice L. Dick is a member of Philadelphia MB Church, Watrous, Sask. She is the author of several novels; her most recent, Other Side of the River, was published in 2014. This review also appeared on goodreads.com and Janicedick.com