What's New
How sweet the sound
One MCC Thrift Store Began With a Few...
A Hunger for Conversation
Getting the mental and emotional rest you need...
The Patience of God
2023 Spirit of MDS Fund accepting grant applications
October 2022 update from the CCMBC Executive Board
Arnold Community Church hosts block party to thank...
When Spring returns
An autumn reset
Home MB HeraldColumns The mind of Christ in the Middle East

The tragic end to an international flotilla’s attempt to break the blockade of Gaza brought the territorial dispute of Israel-Palestine to the headlines in early June. The conflict in the region is multifaceted, deep-seated, and long-running, so it’s tempting to ignore the deluge of reports as so much bad news from far away. Instead, as Mennonite Brethren Christians, let us engage the politics and encounter the people of this conflicted land as we pray for its peace. 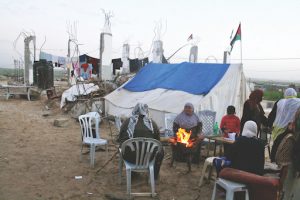 Restrictions on the entry of building materials into the Gaza Strip make it impossible for Gazans to reconstruct buildings and infrastructure damaged during the Dec. 2008–Jan. 2009 war. PHOTO: Doug Hostetter

Regarding national bodies, our Confession of Faith draws on Hebrews 11:13–16 to declare, “the primary allegiance of all Christians is to Christ’s kingdom, not the state or society.” Historically, Mennonites have shied away from participation in politics (though MBs now run for office without condemnation from churches). But the Confession also says, “Christians cooperate with others in society to defend the weak, care for the poor, and promote justice, righteousness, and truth.” Neither participation in nor avoidance of politics should get in the way of our responsibility to pursue justice as we follow the second and greatest commandments: to love God and our neighbour (Matthew 22:37–39).

The situation in Gaza and the failed attempt to bring humanitarian supplies to the 1.5 million Palestinian people living under a strict blockade since 2007 is just one example of how a complex political situation has caused hardships for ordinary people. Mennonite Central Committee (MCC), an MB partner organization for relief and development work, has been involved in education, peace advocacy, and humanitarian aid in Israel-Palestine since 1962. In response to the flotilla incident, MCC sent letters to the U.S. president and Canada’s foreign affairs minister, urging them to support an impartial and independent investigation into the events. Some say MCC is taking sides, and question the making of political statements. But should we ignore the suffering of fellow humans because of the parties that rule over them or the powers who oppose them?

Some Mennonite Brethren proudly trace their lineage of faith back to the birth of the revival movement in 1860s Ukraine, or further to the Radical Reformation in 16th-century Europe. But did you know that in the Middle East, some families proudly yet humbly claim to trace their heritage of faith to the book of Acts? For almost 2,000 years, Palestinians have quietly maintained a continuous Christian presence, usually outnumbered in terms of their faith, ethnicity, or both.

I recently returned from a study tour to the Middle East, on which I interacted with Palestinians and Israelis. To balance the Western media’s tendency to portray violent characters from Arab countries as religious extremists, our tour was biased toward the perspective of moderate Palestinians. Displaced from their home villages within the borders of Israel in 1948, then from areas of the West Bank since 1967, Palestinians are a people without a recognized national identity, restricted by a separation wall that more than doubles the Berlin wall in length and height.

Many of our speakers were Palestinian Christians who pleaded with us, as representatives of the church in the world, to continue to visit, and to remember their struggles and their witness in “the Holy Land,” where the focus often falls on the Jews. Though no Mennonite churches exist in the Holy Land, Christians like Melkite archbishop Elias Chacour, like Anabaptists, are inspired by the Beatitudes (Matthew 5), pursuing Jesus’ way of peacemaking and meekness in a land full of conflict. 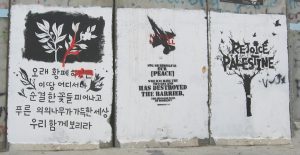 Graffiti covers the West Bank side of the Separation wall.

Of particular interest to Mennonite Brethren is a man from Bethlehem, Bishara Awad. As a young adult, Awad studied at MB Biblical Seminary in Fresno, Cal., before returning to his home to teach at MCC’s Hope School in Beit Jala. Noticing that many young Palestinians who left the economically stifled West Bank to study abroad never returned home, he began offering Bible courses in the evening. That initiative to educate students locally, begun in 1979, has grown into Bethlehem Bible College, an interdenominational school which trains more than 100 Palestinian students each year to be pastors, educators, counsellors, Sunday school teachers, and communicators.

Awad has a passion for evangelism, and he builds bridges in the community through the Shepherd Society, an organization that offers humanitarian aid and long-term development to the struggling residents of the West Bank, Christian or Muslim.

“Let us have the mind of Christ, rather than the mind of the U.S. or Israel,” Awad exhorted us in our thinking and acting regarding the conflicted region. As the human suffering in Gaza and the recent violence between activists and army come to the forefront of the world’s attention and again recede, may we as Mennonite Brethren seek the mind of Christ for our response.

“Believers seek to be agents of reconciliation in all relationships, to practice love of enemies as taught by Christ, and to be peacemakers in all situations,” the Confession instructs. May we model and promote peacemaking, acting out the mission and example Christ set. In our prayers, may we acknowledge that it is God’s work – peace does not succeed or fail on our efforts but for God’s glory according to his timing.

—Karla Braun is a member of Crossroads MB Church, Winnipeg.