What's New
A FOCUS on Mission
Must Patience Be So Slow?
Harold Jantz: A Heart for the Mennonite Story
Lorlie Barkman: A Life of Creative Engagement
Last Days, First Days
Women in Ministry: Bertha Dyck
January Moment in Prayer “Holy Spirit—Fill Us!”
The Church as the Patient Body of Christ
Advent: Making Much of Jesus: Christmas Day
Advent: Making Much of Jesus: Fourth Advent
Home MB HeraldColumns The aerodynamics of community

The aerodynamics of community

I had a second flat tire. It was the first day of an awareness-raising bike ride in Honduras on a Mennonite Central Committee learning tour. David (pronounced Da-veed), the mechanic who fixed my flat, wanted to help me catch up to the group, so he motioned for me to ride close behind him. A competitive cyclist, David set a vigorous pace. I pedalled to keep up, feeling a burst of strength as we glided through the last 20 km of the day’s 100 km ride.

I went much faster than I could have gone alone. I was inspired by following a strong rider, but I was also taking advantage of aerodynamic principles.

Within the turbulent wake of air created by a cyclist, a calm area of low pressure moves along behind the rider. A cyclist following the rider is pulled along. When you “draft” with another cyclist, you can use 10–30 percent less energy. In a road race, sometimes a team of cyclists ride one behind the other to maximize their collective energy. When the lead rider gets tired, he or she peels off and goes to the back while another cyclist leads the charge.

In a similar way, practising interdependence in relationship has many benefits. When one person or a family is in crisis, those who are strong can help them manage practically and encourage them spiritually. Making connections mutual ensures that no one burns out and everyone has the privilege of giving. Creating deep friendships with other Christians can also challenge us to live more faithfully for God.

Ecclesiastes 4:9–10 tells us: “Two are better than one, because they have a good return for their labour: If either of them falls down, one can help the other up.” 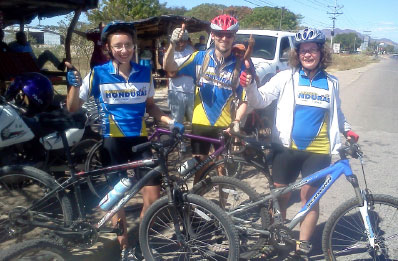 A current source of community for me is my church “life group.” We’ve been through a lot together. We’ve helped each other with large projects around the home, like clearing a cluttered garage. When I had surgery a few years ago, they brought us meals. We supported another member through her battle with cancer. In the midst of raw, messy parenting troubles, my husband and I called one of the couples to talk and pray – even late at night.

It can be hard to ask for help and to be vulnerable enough to expose our weaknesses. But genuine community can’t happen unless we reveal our true selves – struggles and all.

Just like cyclists who draft, we need to take turns being in the lead. Galatians 6:2 says, “Carry each other’s burdens…” (emphasis added). It’s important to include people who are needy in our circle of friends, but also those with the capacity to help us cope when overwhelmed. And if we let them, those we think are needy may have surprising things to give when we ask for help.

Most people like to give; it makes them feel valued and purposeful. Don’t deny others this pleasure by keeping your needs to yourself.

It’s also good to include people who are not believers in our mix of close friends. At times, I have felt uncomfortable revealing difficulties to non-Christians, thinking I needed to be a good advertisement for the “trouble-free life in Christ.” Now, I let them watch me flounder and see me pray. I ask them for help. And as I depend on God to get me through, Jesus is revealed.

Spur one another on

“And let us consider how we may spur one another on toward love and good deeds…” (Hebrews 10:24).

Community isn’t just important in times of crisis. Rich relationships also help us push forward. As a life group, we’ve been challenging each other to go deeper with God and in service.

Tired of hearing and reading truth but not putting much into practice, we wanted to make a difference in our community. Uninterested in a one-time token event, we asked a local refugee home in Kitchener, Ont., if we could sponsor a room as a group. This was a new idea for the organization. Together, we hammered out an agreement.

Each individual or family in our group contributes financially as they are able. We clean and paint the room when a refugee moves out and pray for the new person coming in. Over the past year, we’ve developed a relationship with a man who fled his country because of persecution for his Christian beliefs.

When practical needs come up, we meet them as a group. We also continue to pray for our refugee friend. He has shared his incredible testimony with us, which builds our faith. He has also begun reaching out to Muslims at our church’s biweekly clothing and food distribution to people in poverty.

The “aerodynamics” of community are at least as beneficial as drafting. Don’t be afraid to call up a friend, reveal who you really are, make it mutual, and inspire each other to new speeds. 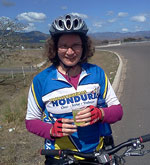 —Sandra Reimer belongs to Glencairn (MB) Church,Kitchener, Ont. On an MCC Honduras learning tour Jan. 5–16, 2013, she visited the work of Mennonite Central Committee partners. She and two of her life group members also joined Hondurans as they cycled from coast to coast raising awareness about the need to improve public education.