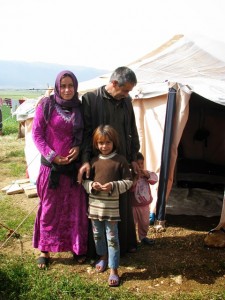 A Syrian family in a refugee camp in Lebanon.
Credit: World Renew.

“I have a headache everyday worrying about how I will pay my rent and feed my family.”

That’s what Syrian refugee Amoun Habouch, who is caring for eight children, told Foodgrains Bank executive director Jim Cornelius in August when he visited her in Lebanon.

Habouch, like many thousands of other refugees in that country, is facing an uncertain future. She and her family can’t go back home, but life in Lebanon is very hard. Rent is high for their one-room apartment, and it is difficult for her husband to find a job.

Ali Hussein and Khadide Namouk and their six children also fled to Lebanon after their home near Damascus was bombed. They found shelter in an apartment in Shabriha, which they share with six other refugee families. Ali and the other fathers are looking for work to support them.

But they are also finding it hard to get work. The large flood of refugees that have crossed into Lebanon means there are more people looking for work than jobs, and wage rates have fallen. Sometimes there is only work available for children at very low wages.

Khadide spoke sadly when she told Cornelius, “I will have to take two of my children out of school to work to help the family, to help buy the food we need.” Many others also told him of sending their children to work to help support their families.

“Most of the refugee families I spoke with are spending a lot each month to pay for rent, even for the most basic accommodations such as tool sheds, garages, or permission to pitch a tent,” Cornelius says.

“After paying their rent, they have very little money, if any, left over for food and medical expenses.”

Through its members, the Foodgrains Bank is responding to the needs of Syrians affected by the conflict; to date the organization has committed nearly $4.2 million to provide food for some 55,000 displaced people and refugees in Syria, Lebanon, and Jordan each month.

“This crisis is a catastrophe for the families and children caught in the crossfire,” says Cornelius, adding that with over six million people displaced, “it has turned into one of the worst humanitarian crises of our time.”

The Foodgrains Bank is inviting Canadians to help it respond by making a donation to the Syria Crisis Appeal Fund. Gifts to the Fund will be used by Foodgrains Bank members to provide food rations and vouchers for food that can be redeemed in local stores.

“These are people just like us,” says Cornelius. “Before the war, they lived peaceful and stable lives in cities, towns, and farms. They had jobs, a house, and were able to feed their families.

“Now they have fled for the lives, with no way of knowing how or when the conflict will end or even if they will ever be able to go home again. Donations to the Syrian Crisis Appeal Fund will provide them with help during this difficult time.”

The Foodgrains Bank response to the Syrian crisis is made possible by support from the Canadian government.