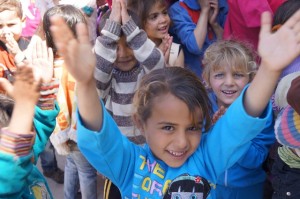 This Syrian girl, whose name is withheld for security reasons, was singing, playing musical chairs, and painting when MCC visited the temporary Lebanon community where she lives. The activities were coordinated by MCC’s partner, Development for People and Nature Association. (MCC Photo/Sarah Adams)

When Syrian children return to school this fall, many will carry a weight much heavier than a backpack.

They will remember fleeing their homes while bombing, shelling, shooting, and raids happened around them. The loss of family members and neighbours who have died in the Syrian conflict weigh on them.

Some worry that they will not have a place to live or that they won’t be able to stay where they are currently sheltered. Others aren’t sure they will be able to attend school, because there’s no school available or because their families are running out of money.

“The children are most affected by what’s going on, especially psychologically,” said Bishop Jean Kawak. He is a spiritual director for children and youth leader of the Syrian Orthodox Diocese in Damascus.

When he asks children what game they would like to play, they suggest violent games.

Concern for the children has been part of almost every plan Mennonite Central Committee (MCC) has implemented with its partners since the beginning of the Syrian crisis more than two years ago. The children who are affected are not just Syrian, but also those in Jordan and Lebanon, who have to share their schools, food, homes and resources with relatives or guests.

Getting children into school is the most positive way to help refugees and displaced children within Syria to cope, said the Rev. Paul Haidostian, president of Haigazian University in Beirut and partner of MCC Lebanon.

The principal of an Armenian Evangelical School recently told him: “School life gives a sense of ‘normalness’ to the child’s psyche. When the child is studying, he/she feels more productive and learning in itself is therapeutic.”

In Amman, Jordan, however, not every Syrian child can go to school, said Colin Gilbert, project director for Jesuit Refugee Services (JRS) in Jordan. MCC supports its kindergarten and informal education for refugees of all ages and nationalities after school.

“Although Syrian children have access to government primary schools in Jordan, many find themselves in classes of more than 60 students, and some schools have been turning Syrians away due to the high number of students in classes,” Gilbert said.

Housing is a significant issue for Syrian refugees in Lebanon, where the government has not provided shelter for refugees, said Ali Jammoul, project officer and volunteer coordinator for Development for People and Nature Association (DPNA), an MCC partner.

“It leads to various problems, such as epidemics, inaccessible drinking water, sanitation and hygiene issues, living in places that are not suitable for living, sexual harassment, domestic violence, no ability to attend schools,” Jammoul said.

Worse, he said, families who have used their savings to rent houses are finding their money is dwindling. He expects more families to become homeless if the crisis continues.

DPNA and MCC have been working together to provide psychosocial activities at one of the biggest shelters in Lebanon, based in and around a partially built school. DPNA conducts art workshops, group games, and musical activities for the children as well as distributing kits and blankets.

“The children love it when the young adults from our partner agencies come to do activities with them. They run up to them when they arrive and trail after them when they leave,” said Sarah Adams, MCC representative for Syria and Lebanon.

MCC continues to request donations for its Syrian crisis response. Donations can be made online at donate.mcc.org, or by contacting your local MCC office at mcccanada.ca/about/contacts. Relief kits and hygiene kits are especially needed.