Supporting children through a drought 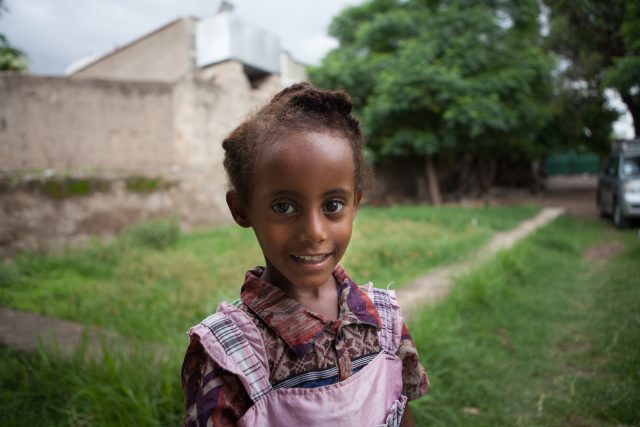 It’s time for lunch at Remember the Poorest Community School, about 100 kilometres south of Addis Ababa. Students are digging into the pasta and buns on their plates.

For some of these children, aged four to seven, it will be their main daily meal. Ethiopia is enduring its worst drought in 30 years; the price of food has soared and families are struggling to feed their children. Mennonite Central Committee is responding to that need with a free hot lunch program for all of the approximately 225 students. The first meals were served in May of 2016. The program is in addition to MCC’s ongoing work with local organization Remember the Poorest Community (RPC). Since 2005, MCC and RPC have provided free education at the school. 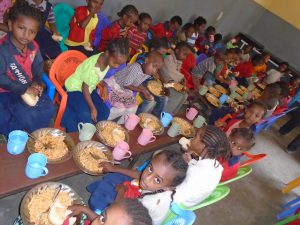 Children enjoy a hot lunch at Remember the Poorest Community School in Ethiopia. Working with its long-time partner, Remember the Poorest Community (RPC), MCC has added a feeding program to our current education project in Adama (also known as Nazret), Ethiopia. 250 students at the school receive a hot lunch five days a week. Many of the households included in the project are among the most poor and food insecure in Ethiopia. The current drought in Ethiopia has led to escalating food prices in the region. The goal of the hot lunch program is to increase access to nutritious food, thereby improving concentration and attendance for children. PHOTO: Matthew Sawatzky

Cath Woolner, an MCC representative in Ethiopia, says the children come from the most vulnerable families in the region, where household income is less than C$25 a month. Parents earn a living by selling small items such as candy or vegetables, taking manual labour or cleaning jobs. Some get income through begging or working in the sex trade.

“We hear stories about what these children would be doing if they didn’t come to this school,” Woolner says. “They would be begging alongside their parents, or staying alone in the family’s plastic tarp house while their parents are away working.”

Drought is putting even more pressure on families. Recently, over a period of only a few months, the cost of teff (used to make the traditional Ethiopian bread, injera) jumped by 25 per cent. The school master, Mengistu Dejene, says families cannot afford these higher prices and many are reducing the food they buy.

“Some students were only coming to school a few days a week and when they came, they didn’t bring a lunch,” he says. “They were hungry and tired and they got sick. It is hard for them to learn when they have these problems.”

A report prepared by RPC says when these children saw others with lunches they were sad and cried, snatched food from their classmates, or asked permission to go home. Sometimes teachers and other students shared their food.

Rising food prices have had another consequence – the exodus of families from Adama. To avoid paying rent and other expenses, families are moving in with relatives in other regions. 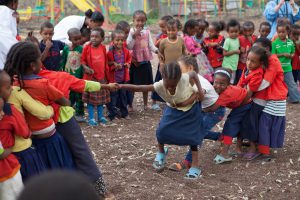 The drop-out rate at the school has increased significantly. Between September of 2015 and March of 2016, about 20 students left. That compares to a drop-out rate of five to eight students in past school years.

Dejene and Woolner are hoping the hot lunch program will reverse that trend. Five days a week students will be served locally purchased food prepared by two cooks. Meals include traditional healthy foods such as injera with shiro (chickpea powder made into stew), rice or spaghetti with sauce, vegetables, bread and milk.

Woolner says if children have a daily meal at school they will be more attentive and engaged in learning. And the pressure on families to leave Adama will decline.

“This will mean they can stay in school,” she says. “They will be able to learn and that will help them when they get to primary school, and beyond that,” she says. 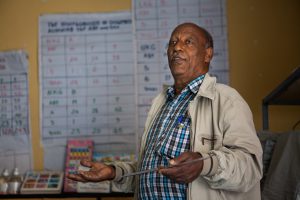 Mengistu Dejene (Director at Remember the Poorest). The current drought in Ethiopia has led to escalating food prices in the region. More than 20 students have left since the school term began in the fall of 2015, as their families have moved in with relatives in outlying areas to save on rent and utilities and free up money to buy food. PHOTO: Matthew Sawatzky

The hot lunch program ends over the summer break and resumes in September. It is currently scheduled to run until March of 2017, but Woolner is hoping it can be extended beyond that. To learn more, visit http://mcccanada.ca/learn/what/education/globalfamily/programs /remember-poorest