What's New
Ask God which town
Where to from here?
CCMBC National Director attends 2022 ICOMB Summit
MCC Canada and MCC Manitoba sell shared property...
The world appears to be growing darker
Sharing a new and unified language
6 reasons to attend the MWC Global Assembly...
One too many
Just one more
A safe place in Winnipeg
Home Arts & Culture Mennonites dialogue on same-sex 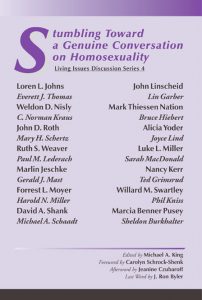 Stumbling Toward a Genuine Conversation on Homosexuality

I’m not sure my late mother’s arsenal of clichés included, “You can’t judge a book by its cover” but when I first picked up this compilation of articles from editor Michael A. King, it certainly didn’t say, “Please pick me up and read.”
Initial hesitancy aside, I’m glad I journeyed with so many who gave so much of themselves to this volume.

The book is divided into two parts. The first is ostensibly a reprint of a special edition of the Anabaptist DreamSeeker Magazine, Winter 2006, published in response to a decision by Seattle Mennonite Church pastor Weldon D. Nisly to perform a same-sex wedding ceremony for a lesbian couple in his congregation, July 2004.

After the Pacific Northwest Mennonite Conference suspended his credentials, Nisly called a congregational meeting where members gave overwhelming affirmation of his leadership. Nisly, a contributor to this book, quotes Meister Eckhart – “True followers of Jesus are absurdly happy, totally fearless, and almost always in trouble.”

Part two expands the conversation with solicited and unsolicited responses to the DreamSeeker publication. The variety of perspectives include conservative (Harold N. Miller), not so conservative (Joyce Lind), as well as Lesbian-Gay-Bi-Trans (LGBT) persons who are celibate (Michael A. Schaadt), LGBT persons who tell us that God is healing them and that they are moving into opposite gender relationships (Forrest L. Moyer), and LGBT persons who are living in a committed relationship with a person of the same-sex (John Linscheid).

All contributors come from an Anabaptist/Mennonite position, and most are connected to Mennonite Church USA. I found it most interesting that the U.S. church’s official position closely mirrors that of MBs in Canada. They accept those who have a same-sex orientation, but would not condone same-sex relationships. The Canadian MB statement counsels “homosexuals to give up their lifestyle and find healing in Christ.”

It’s impossible to approach this issue generally and this book specifically without any preconceived notions. I know what the Scriptures have to say on this issue – to make them say otherwise requires hermeneutical gymnastics beyond my comfort level. We also have no recorded words from Jesus on this subject whatsoever.

Throughout my ministry I have worked with churchgoers who’ve wrestled mightily with this issue. I remain skeptical of those who have claimed deliverance from a same-sex orientation. I struggle with the requirement that those with same-sex orientation must remain celibate, while acknowledging that promiscuity is a real problem in the gay community. I’m not interested in the Gay Pride parade down the street from my home in Toronto, but I’m not all bent out of shape about same-sex marriage.

The beauty of this volume is that all of my doubts, questions, and struggles are found within its pages. No definitive answers are reached, no grand proclamations emanate from its pages. It truly is a dialogue, a dialogue that needs to happen in the church in general, and among Mennonites in particular. Listen to the wonderfully provocative questions from Gerald J. Mast:

What if the presence of gays and lesbians in the church is neither a symptom of the church’s apostasy nor a right based on an unchangeable orientation but rather a gift of God to be received with gratitude? What if the Mennonite church sought to be faithful rather than effective? What if it discovered with joy the gifts that it has been rejecting? What if this book helped the church remember the dialogue it has said again and again we are all called to have, helped the church remember the people with whom we are called to be in dialogue, or helped us all discover the gifts of God, the grace of God, which we in the Mennonite church have all too often excluded? What if God requires mercy, not sacrifice? (Hosea 6:6; Matthew 12:7)

If you still have questions as I do or if dialogue on the subject seems to be a good idea to you, read this book.