What's New
Through the conflict, life carries on in Ukraine
A FOCUS on Mission
Must Patience Be So Slow?
Harold Jantz: A Heart for the Mennonite Story
Lorlie Barkman: A Life of Creative Engagement
Last Days, First Days
Women in Ministry: Bertha Dyck
January Moment in Prayer “Holy Spirit—Fill Us!”
The Church as the Patient Body of Christ
Advent: Making Much of Jesus: Christmas Day
Home Life & Faithfeature articles Homosexuality: Blending understanding, compassion, and conviction

A few years ago, I listened to the testimonies of two men who had been involved in homosexual relationships. Toni had grown up with an inordinate need for male affirmation. At age 20, he found that affirmation in the gay community.

Already at a young age, Neil had been attracted to boys. He soon felt what he called “a spirit of homosexual oppression.” Attending Bible college, church services, and attempts at exorcism did not help, so Neil began to live openly as a gay man.

Toni and Neil (not partners) moved toward sexual healing. They both learned about and accepted what Scripture says about God’s intention for human sexuality. This notwithstanding, both men confessed to still occasionally having same-sex feelings. Neil added that although this was true, it was also true that he was celibate. He said, “I don’t have a dispensation to change God’s Word according to my feelings.”

How helpful is the church as a healing community for people like Toni and Neil? How have we spoken into the lives of those struggling with same-sex attraction or homosexual practice, those in illicit or adulterous heterosexual relationships, or those oppressed with guilt and shame through their involvement in pornography?


Putting sex in its place

The church hasn’t been consistently vocal and clear in articulating a biblical view of human sexuality. We have inherited a deep suspicion of the body and its desires. Thus, we have traditionally been very judgmental regarding what we called “sins of the flesh,” while largely overlooking “sins of the spirit,” such as covetousness, greed, gossip, and pride.

Along with our stern condemnation of the sins of the flesh, we’ve only been superficially informed regarding the causes and motivations behind people struggling with same-sex issues. Our relative silence in addressing these issues in an informed and compassionate way has driven many to share their struggles outside the church, where they usually receive sympathy and support without biblically-grounded counsel and care.

So, what must the church teach regarding human sexuality?

Sexual desire is good, lust is not

As Jesus taught, a theology of creation is foundational to our understanding of the meaning of sex and for our sexual ethic (Matthew 19:4–6; Genesis 1:27–28, 2:20–25). Sex is a good gift of God and sexual desire a key component in that gift. Because of the fall, self-centred impulses began to ride roughshod over God’s loving intention. While God gave the gift of sex in large part for our pleasure, human history records a lustful clamouring after sexual gratification outside the God-given parameters.

An unbridled search for sexual pleasure has distorted the other purposes of sex, such as procreation and intimacy. A sense of proportionality concerning the role of sex in human relationships has been lost. The Bible describes this disproportionate longing as lust. Lust is impulsive and unrestrained desire that turns a good gift into something bad (Matthew 5:28; 1 Thessalonians 4:3–4).

Sex, despite its distortions, as seen all around us in terms of rape, incest, polygamy,  and premarital and same-sex liaisons, is still God’s good gift, but its expression has parameters. 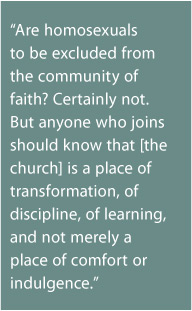 Jesus gave the context in which humans are to experience sexual intercourse: in a covenantal relationship between a man and a woman (Matthew 19:5). There is more than a physical, one-flesh complementarity here. There is a deep, spiritual union, which Paul calls a mystery, akin to the spiritual union of Christ and the church (Ephesians 5:31–32).
Jesus affirms three creational givens regarding human sexuality (cf. Matthew 19:4–6; Mark 10:6–9). John R. Stott summarizes: heterosexual gender is a divine creation; heterosexual marriage is a divine institution; heterosexual fidelity is the divine intention.

The only conclusion we can reach is that there is no scriptural justification for sexual intercourse outside heterosexual marriage.

We are all broken people and have in many ways and in many areas of our lives not followed God’s loving purpose. However, many have received healing and deliverance from such sinful behaviour.

In regard to homosexuality, the evangelical church has, by and large, been swift to judge and slow to minister with understanding and grace. Grace does not free us from God’s intentions, but empowers us to follow those intentions. Paul says in Titus 2:11–12 that grace teaches, trains, and enables us to be self-controlled, upright, and godly. Grace heals sexual brokenness. And the church needs to be a place where we minister such compassion and grace.

A gay brother, who deeply regretted that he had not followed God’s intention regarding his sexual behaviour, left a message for the church shortly before he died of AIDS. He wrote urgently about the imperatives of discipleship. Then he added: “Are homosexuals to be excluded from the community of faith? Certainly not. But anyone who joins should know that [the church] is a place of transformation, of discipline, of learning, and not merely a place of comfort or indulgence.”

Neil told us at our study conference: “Don’t love me that much that you condone my sinful lifestyle.” And Toni advised: “Don’t make homosexuality the prime sin. Simply say it’s wrong. Be very flexible when discussing theories, but not when discussing Scripture.”

The church is called to walk with the broken – blending understanding, compassion, and conviction.

—Walter Unger is president emeritus of  Columbia Bible College, Abbotsford, B.C., and served as chair of the Canadian MB Board of Faith and Life from 2002–2006. He is a member of Bakerview MB Church.
homosexualityWalter Unger
0 comment

The shrinking umbrella of faith