What's New
A FOCUS on Mission
Must Patience Be So Slow?
Harold Jantz: A Heart for the Mennonite Story
Lorlie Barkman: A Life of Creative Engagement
Last Days, First Days
Women in Ministry: Bertha Dyck
January Moment in Prayer “Holy Spirit—Fill Us!”
The Church as the Patient Body of Christ
Advent: Making Much of Jesus: Christmas Day
Advent: Making Much of Jesus: Fourth Advent
Home Arts & Culture Global mission lives behind the next door 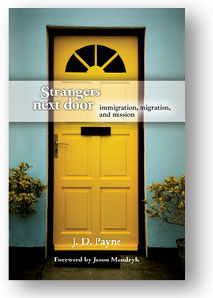 For too long, much of the North American church has held the misconception that mission is all about travelling to the remote regions of the world – and that’s the only way to reach every people group with the grace and truth of Jesus. What would it look like if we began to realize those very people groups have become our neighbours and coworkers, and that we can share the hope of Jesus with them by simply walking across the street, instead of travelling by planes and trains and automobiles?

Members of every people group are migrating to the Western world, J.D. Payne explains in Strangers Next Door, and argues the church’s attitude toward mission must expand to embrace this new reality of multicultural Canada. He urges the church to strategize and equip herself for the challenges and opportunities of being salt and light to a global community that has moved across the street.

Payne, a pastor, author, and seminary professor in Alabama, compellingly intertwines the biblical narrative of God’s people (often on the move) with our present-day reality of global migration to the Western world. If you’re a fan of statistics, you’ll love Payne’s charts and figures on who is moving where and why they are doing so. I especially appreciated his rich appendix of unreached people groups in Canada – testifying to the reality that there are still many people in our land who know nothing about Jesus. Payne’s plethora of migration statistics and anecdotes were useful, but I was most grateful for his “reaching my multicultural neighbours ‘for dummies’” section with down-to-earth, practical tips to consider.

One highlight was his section describing the current migration trends for Canada. In addition to migration statistics for Canada as a whole, Payne also provides migration insight for specific cities and regions within Canada. I found some of the following facts particularly critical:

As a young Anglo-Saxon associate pastor in a greying, mostly Caucasian congregation in one of Vancouver’s most Asian neighbourhoods, I gained from this book a better sense of who my neighbour is, and what it might look like for my church to be more inclusive and welcoming of different cultures and people groups.

Strangers Next Door is a sobering reminder that Canada looks much different today than in past generations; it even looks different than what we might see day-to-day. “The nations” are coming to Canada: we have this unique opportunity to make a difference for Jesus in our world without leaving our own neighbourhoods. How will we respond? Will we enlarge our imagination, sharpen our vision, and realize global mission includes the strangers next door?

[…] “Global Mission Lives behind the next door,” a review of J.D. Payne’s Strangers Next Door: Immigration, Migration and […]