What's New
Delete or not to delete, that is the...
Believers bring water for drought baptism
Encouragement to those in the arena
Keeping attention and making an impact: A few...
Open hands to reconciliation
From the editor
Approaching truth and reconciliation with love in our...
MB Seminary offers new MA in Transformational Leadership...
Multiply August Ukraine Updates
Book Review of Return Stroke: Essays & Memoir...
Home Life & Faithfeature articles Six freak-out-free ways to read Revelation 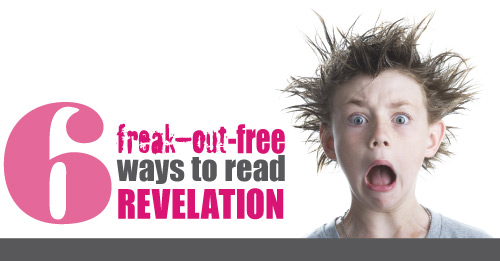 In the flashlight’s green glow, my Bible camp counsellor revealed the secrets of the end times: “If you dial a number with three 6s, you empower the Beast!” I shivered, and went home to make my aunt change her license plate. When I asked my youth leader for hope, he pulled out a chart of seven years of terror.

Perhaps my introduction to the book of Revelation sounds familiar. Since then, I’ve discovered the last book of the Bible was not written to give us nightmares or timelines. So, let me suggest six less-frightening (and more worshipful) ways to read Revelation.

When I say, “apocalypse,” movie-lovers may imagine asteroids, wars, and tsunamis. But the Greek word has nothing to do with disaster; it means “revelation” – an unveiling, a peeling back of the curtain (“Tada!”) into heaven. John’s apocalypse is meant to show us things, not to make them more confusing.

What is it a revelation of? Not “the future” or “Middle Eastern politics,” but “Jesus Christ” (1:1). Why does Jesus begin each letter to the seven churches (chapters 2–3) with a description of himself? He’s saying look at your situation (your temptations, sufferings, strengths, and sins) in light of me.

I compare this “look” to abstract art, because it portrays not what something looks like, but what it is like. The symbolism of apocalypse works the same way: Jesus won’t slice people with a sword in his teeth (Revelation 19), but a word from his mouth has the power to depose nations.

Like other Jewish and Christian apocalypses, a symbol-rich genre popular between 200 BC and AD 200, Revelation is the literature of hope for a new world in the midst of persecution and political powerlessness.

Some avoid Revelation because they sense its picture of Jesus is radically different from the gentle teacher of the Gospels. But this victor is still the “Lamb slain” (5:6) and the “Morning Star” (22:16) – visible when the night is darkest, but a dawning is near.

John offers a glimpse of Who’s on the throne; someday the whole world will see.

On the edge of this “picture” is Christ’s enemy. So, is the “beast” Emperor Domitian, Hitler, or a future dictator? Yes, yes, and yes. John had Roman tyrants in mind (Domitian called himself “Lord and God,”), but these images are meant to be reapplied; any despot who claims divinity or lordship is truly beastly. (1 John speaks of many past, present, and future “anti-Christs.”)

George Beasley-Murray compares Revelation to a political cartoon, much like the Democratic donkey and Republican elephant duking it out in the newspaper. These creatures have “an unmistakable touch of the ludicrous,” says Eugene Peterson, calling them “shopworn,” around so long that they are “starting to lose their stuffing.” The beast from the sea he describes as a “patchwork job.” The beast from the land is a fake lamb. The only power evil has is to imitate, not create.

Evil can threaten and distract, but it cannot coerce. True authority lies with Christ’s witness (Revelation 11). Quite the opposite of my counsellor’s fear-mongering, Revelation is drawing us away from tattered idols toward another kingdom, just and eternal.

Revelation is a letter to first-century congregations. Therefore, one reason for the intensity of Revelation’s language is found in their situation: the church was under extreme pressure. We often hear about persecution; the bigger threat was compromise. Idol worship was not an isolated facet of life: the priests of emperor worship ran municipal governments; trade guild membership, required for buying and selling, included participation in idolatrous feasts. Spiritual war is not a time for pleasantries; the church’s Lover is sending them a letter on the battlefield.

Some find Revelation violent, but notice how the battle is won: “This calls for patient endurance and faithfulness on the part of God’s people” (13:10). The seven prayers of the seals’ cycle (6:1–8:5), “Come!”, “Come!”, “Come!”, “Come!”, “How long?”, silence, and incense, demonstrate that as the faithful pray for Jesus to establish his kingdom on earth, it begins breaking in, “flushing out evil…and meeting resistance. And the followers of the Lamb get caught in the crunch,” writes Darrell W. Johnson in Discipleship on the Edge.

Unlike end-times video games, there is no lip-licking for destruction here. The blood on the divine warrior’s robe (19:13) is his own. Even in the so-called “battle” of Armageddon (16:16–21), no one actually fights: human powers gather in opposition to God, and God yells “It’s over!”

Evil is conquered in Revelation by the redemptive death of a baby Lamb (5:5–6). Jesus calls his church to win the victory the same way: endurance through suffering. Revelation does not present a seven-year “tribulation,” but a time of suffering (1:9) that began with the martyrdom of Stephen, runs through to the underground church in China, and ends at Christ’s return.

An ad shows a woman, lips black and swollen, saying, “Smoking causes mouth cancer.” Does this grotesque message wish destruction upon smokers? Or rather does it demonstrate that its producers believe the consequences of smoking are so severe, they are willing to shock viewers into quitting?

In addition to being an apocalypse and a letter, Revelation is prophecy. Its warnings are graphic because Someone wants us to “quit” for our own good. The early church was becoming complacent to the emperor/idol worship around them; they needed an “intervention.” The goal: always repentance.

Prophets live in two realms: the cosmic – the throne room of the Ruler of the universe and his heavenly army, and the earthly – the realm of war, sheep-herding, and taxes. They saw glorious visions and heard grave warnings “up there” and had to translate them for “down here” using an inadequate medium: language. No wonder John used such strong words and graphic symbols to package his message.

“I saw a military helicopter just like the locusts in Revelation 9,” my friend told me, eyes wide.

Interpreting Revelation without knowing our Old Testament is like watching Dreamworks’ animation Shrek with no knowledge of fairy tales or popular culture; the good ogre, sham fairy godmother, and store called “Old Knavery” lose their humour – and their message. Revelation pulls together multiple Old Testament and first-century images – it doesn’t foresee 21st-century weapons of mass destruction.

Donald Guthrie suggests that of Revelation’s 404 verses, 287 contain allusions to Old Testament phrases or images. The seven trumpets and bowls echo Exodus plagues: hail, blood, darkness, locusts, death, sores, and frogs (all that’s missing is the bugs), and the wilderness judgments: snakes, bitter water, splitting ground, dry rivers. Why? Because the exodus from slavery was just a taste of the real redemption to come.

More than a divine “to do” list (pierced for transgressions – check!), each promise and fulfillment weaves the divine acts together within redemption’s crescendoing story. For example, Revelation 21’s “city” from heaven is a golden cube – like the holy of holies, but rather than death to all who dare enter (Leviticus 16:2), this holy presence has gates open – on every side! Those who search the news for fulfillment in a physical temple or military victory forget the temple has always been a “shadow” (Hebrews 10:1) of something greater, just as the calling of one nation was always to bless the whole world (Genesis 12:3). When John hears the 144,000 from the 12 tribes, he turns to see a multitude from every nation. God’s forever dream is nothing short of a redeemed creation.

To “get the picture” of what we’re waiting for, requires an imagination shaped by Scripture, not the headlines.

The original Worship Together hymnal

A cover to cover reading reveals how many lines of beloved hymns found inspiration here: “Casting down their golden crowns around the glassy sea,” “Worthy is the Lamb who was slain,” “Hallelujah, for the Lord our God, the Almighty, reigns,” “Clothe me in white so I won’t be ashamed. Lord, light the fire again.” Revelation is a call to praise.

The collection of Scripture ends with Revelation for a reason: in it, the redeemed of the Lamb reenter and rule the garden of Genesis (22:1–5), become the temple of Leviticus (21:9–10),  forever leave exile in “Babylon” (18:1–24), and enjoy all the promises of the prophets as a result of the gospel. Because, far from being my camp counsellor’s book of fear, Revelation is the church’s love letter, the world’s wake-up call, and a victorious picture of Jesus to give us the strength to endure until he returns.

The mark of the beast: more than skin deep

A trilogy of scare-them-to-Jesus movies from the 1970s presents the “mark of the beast” – required for buying and selling – as tattoos, and tabloids warn of microchips implanted under our skin, but they miss the fact that the beast’s isn’t the only mark here. In fact, the beast is only mimicking the original. In Revelation 7, angels mark the foreheads of the faithful to show they belong to God (reminiscent of Deuteronomy 6:6–8). If this mark isn’t physical, the beast’s isn’t either. Perhaps it is more pervasive and “painless” than a tattoo: every choice, whether to compromise to the world’s values or to risk for God’s kingdom, is a mark of our true allegiance.

Why I want to be left behind

Popular movies, books, and worship songs warn against being “left behind” when Christ “raptures” true believers into the air. Neither term is used in Revelation. “Left behind” is from Matthew 24:40-41: “Two men will be in the field; one will be taken and the other left.” Jesus is comparing his second coming to Noah’s flood (vv. 37- 39) – in that context, the ones who were “left” when the waters came fared much better than those who were “taken” by the flood! When my Saviour and judge returns, I want to be left behind.

“Rapture” comes from 1 Thessalonians 4:13 – 18. There Paul says when Jesus comes to earth on the clouds, we will go out to meet him; however, he never says Jesus will reverse directions and go back up! As in the Matthew 25 parable of the 10 virgins who go out to meet the bride groom, then escort him to the house, Paul is saying we are Jesus’ welcoming party.

In the same way, when first-century emperors visited a colony, citizens would go out to escort him to the gates. As citizens of heaven (Philippians 3:20) on this “colony,” we aren’t waiting to relocate to the capital; rather we’re waiting for the emperor to return, quell the opposition, and put everything to rights (see NT. Wright, Surprised by Hope).

————————————————————————————————-
–Angeline Schellenberg holds a masters in biblical studies from Providence Theological Seminary, Otterburne, Man. Her thesis was “The divine warrior motif in the development of apocalyptic literature.” She has taught Revelation at Steinbach (Man.) Bible College, and at Crossroads MB Church, Winnipeg, where she is a member. The only scary beasts Angeline tells her two children about around the campfire are purple squirrels.

The Baby and the Dragon

And then comes the end

The beginning of the end

Kingdoms now and then

To the angel of the church…