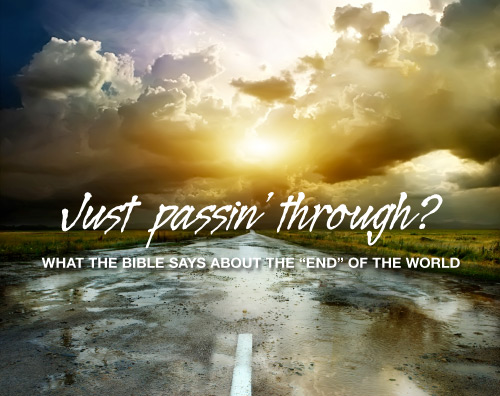 What the Bible says about the “end” of the world

I guess we’ve all been “left behind.” According to what might have been the largest collaborative prediction of the return of Christ, we missed the rapture on May 21, 2011. Either everybody on the planet failed to pass the authentic Christian litmus test, or the predictions of Harold Camping were wrong. The rest of the world watched and mocked Christianity as May 22 dawned.

I grew up in the church. Most of what I recall from those early years brings good memories. People taught me that loving Jesus matters more than anything else. I learned that the world is corrupt, and the place we truly long for – heaven – is far, far away. So, we are to love Jesus and hate the world. This wasn’t hatred for the people who inhabit the planet, but a sincere belief that “this world is not my home, I’m just passing through.”

Are we simply passing through? So many issues plague this world. Creation is dominated by violence, ecological disaster, preventable disease, hunger, and injustice. These things could certainly lead us to desire an escape from the darkness.

But is this how the Bible sees it? Paul’s perspective in Romans 8 will help us explore this question.

Hope for this world

Paul knew suffering, more than any other apostle, and in Romans 8, he reflects upon it.

Present sufferings are nothing compared to future glory. And perhaps this is the same glory that was lost when humanity chose rebellion. In the early chapters of Genesis, we’re given a picture of shalom, present when the whole cosmos exists in beautiful harmony. Humanity, in God’s design, lives in right relationship with God, each other, and the earth.

When Adam and Eve decided to rebel against this creational pattern, they initiated consequences for us all: alienation. Something deep in our bones tells us: “This isn’t right!” We long for a world, for a life, where these broken relationships are put back together.

Paul tells us that the “creation waits in eager expectation… [to be] …liberated from its bondage to decay and brought into the freedom and glory of the children of God” (v. 19–21). John E. Toews, in the Believers Church Bible Commentary, explains: “Creation and humans share a common fate and destiny – they suffer together, they are renewed or saved and transformed or glorified together.”

Whereas the tendency in many escapist views of faith is to believe this world will one day be destroyed to make way for the final spiritual bliss of heaven, the vision of Romans 8 yields hope for this world we inhabit.

Paul continues: “We know that the whole creation has been groaning as in the pains of childbirth right up to the present time. Not only so, but we ourselves, who have the firstfruits of the Spirit, groan inwardly as we wait eagerly for our adoption to sonship, the redemption of our bodies”
(v. 22–23).

Creation is groaning. Christians groan. In fact, the passage goes on to tell us that even the Holy Spirit groans (v. 26). For Christ-followers, the Spirit draws our longings to the final day when our bodies will be resurrected in a healed creation. A day is coming when God will judge evil, and restore our fractured world to be the kind of place where his kingdom is fully present. Heaven will come to earth!

Many of us have been conditioned to believe in escapism, instead of working with God to bring healing to this world. So is this reading of Romans 8 inconsistent with other parts of the New Testament?

Our inheritance in heaven

1 Peter 1:4 speaks of an “inheritance [that] is kept in heaven for you.” The writer isn’t talking about a place outside this world, where we’ll receive our inheritance. During the first century, people understood heaven and earth to be interlocking spheres of one single reality. A veil blinds us from seeing how the two realms interrelate, but on rare occasions, a glimpse of God’s heavenly light seeps through the curtain, surprising and awing us. Heaven is God’s present realm, and earth is ours.

Heaven, especially for a Jewish reader, doesn’t refer to some other place where we eventually go in the future. The curtain that separates our reality of brokenness from God’s reality of heaven will one day be pulled away, forever (v. 5)!

Prior to that future moment of redemption, those who die are with Christ awaiting the ultimate revelation of that inheritance – resurrection and the arrival of God’s kingdom, fully realized on this planet. 1 Peter reminds us, then, that God is trustworthy to keep our inheritance safe until the final day when God joins heaven to earth in a final act of new creation.

In the same way, our salvation is preserved in heaven for the day when it will be complete – when it’s brought out of heaven to the renewed earth for us to enjoy for eternity.

The kingdom of heaven

Many of us have also heard Jesus’ sayings about the “kingdom of heaven,” specifically from Matthew’s Gospel, and use those to talk about an escape from this world. We do well to understand that the same phrase is rendered “kingdom of God” in Mark’s Gospel – they’re synonymous terms.

Matthew, speaking to a mostly Jewish audience, uses the term “heaven” as a reverent way of referring to God. He is not speaking of the kingdom as a place where we go after we die.

Caught up in the clouds

The most famous passage used to describe Christians’ eventual escape from this world is in 1 Thessalonians 4:16–17: “For the Lord himself will come down from heaven, with a loud command, with the voice of the archangel and with the trumpet call of God, and the dead in Christ will rise first. After that, we who are still alive and are left will be caught up together with them in the clouds to meet the Lord in the air. And so we will be with the Lord forever.”

This passage, when placed in the larger context of the chapter, is answering questions that Christians in Thessalonica had concerning death. What has happened to our loved ones who have died before the return of Christ to earth? What is their and our ultimate destiny?

Paul’s answer: bodily resurrection! Not an escape into the sky. To explain this, Paul borrows two specific images from the Old Testament and a third from Roman culture.

The first image relates to Moses, who came down from Mount Sinai with the Law after the great blast of the trumpet.

The second image is taken from Daniel 7, where the “one like the son of man” (v. 13) and the
community he represents, is vindicated over the enemies of the people of God. Clouds symbolize the power and authoritative judgment of God for the rescue of his people. Paul applies this idea to Christians who are facing various forms of persecution.

Finally, Paul borrows a third image of an emperor visiting a city. The people of that region would go out to meet the emperor to usher him into their hometown in an open-air, royal procession. According to theologian N.T. Wright, Paul applies this picture to the church, who will usher their King into the new creation.

Tomorrow’s reality matters today. The question remains: How do escapist views of the end times affect how we live in the present?

If we buy into the escapism of popular theology, a subtle problem may develop. We may be tempted to focus all our efforts on spiritual issues, and fail to recognize that God’s mission is also for physical things. We start to see the earth as disposable, bound for total annihilation. Issues such as justice for the poor and ecology get tacked on as “extras,” while our main focus is getting people to pray the “sinner’s prayer” so they’re not “left behind.”

Our beliefs about the end change the way we deal with earthly problems in the present. Choosing to not see the earth as simply a consumable resource, but as belonging to God, is just one example of many.

According to Jesus, we are to pray “Your kingdom come… on earth as it is in heaven” (Matthew 6:10), not the other way around. When John’s vision in Revelation comes to its dramatic climax, the “new Jerusalem” comes down from heaven to the earth (Revelation 21:2). The “new heaven and new earth” (newness of nature and quality, not a replacement of the old) will be this planet, with beautiful new characteristics.

But, that day hasn’t yet arrived. We live in the “already” of the kingdom, but long for the “not yet.” This doesn’t mean we simply wait around as if our escape will come when Christ returns.
We, according to Romans 8, are invited into partnership. Amid groaning over the brokenness of our world, the Spirit brings the “first fruits” of God’s future world – in the present. That means we’ve got a job to do!

Consider theologian Tim Geddert’s translation of Romans 8:28 in Double Take: New Meanings from Old Stories. Geddert explains that, throughout the New Testament, the Greek word sunergei denotes “two parties working together.” Yet traditionally, translations neglect the “partnership” element of this popular verse. It isn’t just about God doing the work, but about God partnering with humanity to work for good in our groaning world: “In all things God works together with those who love him to bring about what is good….”

God wants to work together with us to counteract the groaning of our broken world. Empowered by his Spirit, we’re invited to join with God to bring about “what is good.” Every time we reflect the realities of the coming reign of God on the earth, we partner in his mission. With every act of compassion, with every move toward peace, with every responsible action toward animals, with every moment of comfort for the afflicted – we partner with God. We are not “just passing through”: we’re on a mission.

This evangelistic mission invites us to tell the beautiful story of Scripture, both in word and action. It’s the story of God beginning a project declared “very good,” yet damaged by rebellious evil. God, in Jesus Christ, rose from death, defeating those powers of darkness and corruption.

One day, Jesus will return to establish his reign on this earth forever. In order to prepare for the future union of heaven to earth, we proclaim that people need to accept Jesus as Lord. And when they do, they have all the resources – through God’s Spirit – to bring signs of that world into the present: relationship with God, reconciliation between foes, liberation from various forms of slavery, stewardship of the planet, sacrifice for the good of others, social equality, and good news for the poor.

Any version of the Christian story that reduces the good news of Jesus to escaping this world fails to proclaim the hope of the Bible. God’s invitation into partnership is “for” this world.

The end time will arrive when Jesus returns. It won’t be a day for evacuation, but for the liberation of the cosmos. May we become a people known for living as though God’s future world has already begun!

–Kurt Willems is in his final year of MDiv studies at Fresno Pacific Biblical Seminary, Cal. He is a freelance writer for various print and online publications, including his personal blog hosted by the religion website Patheos.com.

N.T. Wright, Surprised by Hope:
Rethinking Heaven, The Resurrection, and The Mission of The Church

And then comes the end