A driving quarter beat on the kick and a solid bass line were hard to resist. I cast a sideways glance at my staid and suited companion, and saw the toes of his left foot tapping surreptitiously, seemingly frustrated that the rest of the foot was re- using to get involved. Around me others were clapping, even swaying to the celebratory worship song. “Shall we dance?” I asked.

“What? No!” Aghast, the rebellious foot was stilled. “I could never do that. It’s not what I am!”

Really? I mused silently, pondering the chasm between what is, and what can be. 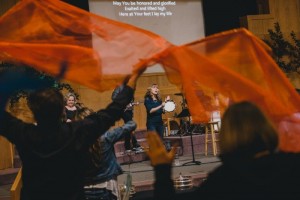 Grieving what they believed to be the stagnancy of orthodoxy, and inspired by Pietist leaders such as Eduard Wuest and Wilhelm Bartel, Mennonite colonists in 19th-century South Russia found themselves jumping and dancing, even beating upon “boxes and chests on which they placed pots and cutlery to increase the noise.” Repentance from worldiness and a lukewarm spirituality had led to demonstrative joy, and then to widespread renewal.

Due to their loud, exuberant worship, these renewalists (who became the Mennonite Brethren) were first referred to as Munteren, or “joyful ones.” Later epithets, such as Huepfer (“leapers” or “jumpers”) were far less flattering. Their meetings became a manifestation of glorious, chaotic joy as Psalm 47:1 was taken literally: “Clap your hands, all you nations; shout to God with cries of joy.”

The Mennonite mother church, cautiously aloof, frustrated the fervour of the renewalists. Such exuberance was contrary to the historical roots of the traditionalists; they were known for a conservative and restrained biblicism: Mennonites did not dance. John B. Toews writes, “The Old Church…in effect said: ‘This is what we are, so let’s make the best of it,’ to which the Brethren retorted, ‘this is what we can be, let us strive to attain it.’” 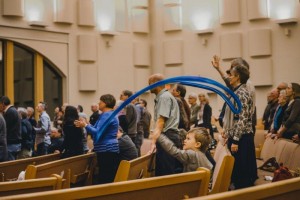 The story seems, in some ways, to parallel an incident in the Old Testament involving King David. Like David, the renewalists were driven by a passion to celebrate their salvation, dancing before the Lord “with all their might.” Like David, they unfortunately gave free reign to this passion without much humility or forethought, and the consequences were dire in both cases.

When David first sought to bring the ark to Jerusalem, he was either uninformed or dismissive of the directions Moses had given regarding the reverent handling of this holy relic. It was not to come into contact with human hands, but be carried by Levites using poles inserted through rings attached to the wooden sides; only the poles were to be touched (Numbers 4). Instead, David placed the ark on a cart.

In this procession, surrounded by a military escort of 30 thousand men, there was no lack of sincere religious and emotional fervour. David and all Israel danced “with all their might before the LORD, with castanets, harps, lyres,
timbrels, sistrums and cymbals” (2 Samuel 6:5).

Sincerity and joy, however, did not atone for careless irreverence. When the oxen pulling the cart stumbled, Uzzah put out his hand to prevent the ark from falling. Then, “The LORD’s anger burned against Uzzah because of his irreverent act; therefore God struck him down, and he died there beside the ark of God” (v. 7). One can imagine the sudden, deafening silence that ensued. The dancing abruptly stopped. 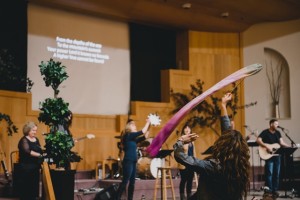 The Brethren were likewise to be interrupted in their dance. At an impasse of mutual suspicion and resentment, they seceded from the Mennonite mother church on January 6, 1860, forming the Mennonite Brethren church. For a time the dancers whirled on, defiantly independent and devoid of wise leadership. Then their oxen stumbled, as it were.

Some of the impetuous group of “jumpers” crossed the line into immorality and sensuality with the “sisterly kiss” and the notion of “free grace,” which claimed their exuberant state made them immune from sin. The results were disastrous.

When they came to their senses, there was both shock and shame. Shaken, the Mennonite Brethren stopped and took stock of the situation, much as King David did for the three months following the death of Uzzah. Meetings were held to draft a policy statement (the so-called June Reforms of 1865) that established parameters and an authority structure for the movement. Although sporadic manifestations of exuberant worship continued, the Mennonite Brethren for the most part chose instead to separate themselves from the European renewalism of the 19th century.

The believers church tradition evolved to include the restraint or suppression of pneumatic expression. In the ensuing conflict, the mother church began active, hostile persecution of the Brethren. The “joyful ones” became hesitant to rise and dance. The Mennonite Brethren, following the June Reforms, hung their heads: the drum silent, the voices muted, the dancers apologetic.

Did it need to be so? What might they have learned from the chastened king? 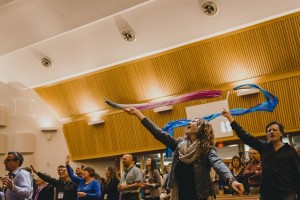 Although harshly disciplined for his irreverence, King David danced on. In fact, his recovery was almost immediate and showed even more fervour than before. Demonstrative passion in both repentance and worship became the hallmark of the Davidic kingdom. However, he was indeed the wiser; David now worked in respectful cooperation with the Levitical leaders and according to biblical mandate, adding a deeper reverence, humility and discipline to his unbridled passion.

In contrast, the MB renewal movement broke into two camps; those who stridently maintained that they must follow direct, personal revelation by the Spirit of God and value relational subjectivity, and those who argued for a careful suppression of the pneumatic and a community discernment of the whole of Scripture.

“Seek the Spirit!” met with the equally ardent cry of “Search the Scriptures!” The “Spirit/letter” controversy was in part addressed by the reforms of 1865, but for many the issue remains unresolved to this day.

Perhaps, as with King David, we need not be forced to choose between the two extremes of subjective emotionalism or dry orthodoxy. The Spirit and the Word do not oppose one another; there is still a call for those “after God’s own heart” to rise and dance, both metaphorically and literally, and to lead the throng in reverent yet passionate procession.

Perhaps, too, it is essential that they do so. Who, better than this disciplined king, to lead a nation with humility and reverence? Who, better than a chastened and humble people, to pastor revival, whether in 1860 or in the 21st century? The Mennonite Brethren could indeed be just such a people, if we do not allow our history to hold us hostage. 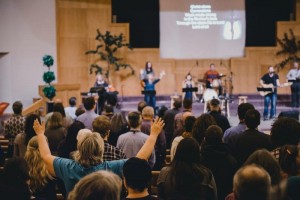 We are meant to desire God and to pursue him; seeking and loving him with all our heart, mind, strength and soul. How we choose to pursue him is, obviously, of vital importance.

Structure, submission and reverence are crucial, yet not as an end in themselves, but as a means to an end. The ark must be carefully transported so that we might dance – fearlessly, glorifying God without causing harm to ourselves or others.

Undeniably, to carry too casually the holy burden of subjective spirituality is to choose a cart that is often unsteady, unsafe. Yet, as with those early, discontent colonists of Russia, there is for many a growing urge to be vulnerable and expressive in our worship; to weep, laugh, perhaps even to dance.

Indeed, postmodernism and the 21st-century resurgence of global Pentecostalism shows acceptance, if not outright appetite, for the exuberant and experiential aspect of worship. Subjective emotions and experiences are a necessary and vibrant component of any relationship; surely it must be so with our relationship with God.

—Nikki White is a writer, musician and “Contextual Charismatic” who attends North Langley (B.C.) Community Church, where she oversees curriculum development and training of prayer ministry teams. Their training resources can be viewed at www.l2lnet.org.

The Holy Spirit living in us