What's New
A FOCUS on Mission
Must Patience Be So Slow?
Harold Jantz: A Heart for the Mennonite Story
Lorlie Barkman: A Life of Creative Engagement
Last Days, First Days
Women in Ministry: Bertha Dyck
January Moment in Prayer “Holy Spirit—Fill Us!”
The Church as the Patient Body of Christ
Advent: Making Much of Jesus: Christmas Day
Advent: Making Much of Jesus: Fourth Advent
Home MB HeraldHomepage Serving prison families is answer to prayer for Abbotsford couple

Serving prison families is answer to prayer for Abbotsford couple 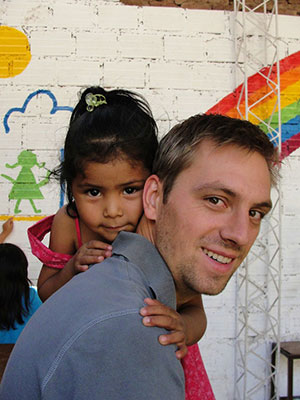 Tyler Regehr gets a hug from Carlita who lives with her parents in a prison in Bolivia. Tyler and his wife Renae are working with prison families in Bolivia, serving with MCC.
Photo: MCC BC

The children come running out of the prison gates with their backpacks on, saying goodbye to the guards, ready to begin their day at Casa de la Amistad, or Casita: House of Friendship. For these children whose parents are prisoners, having a friendly house to go to during the day is a gift. In Bolivia, men or women are still expected to provide for their families even while incarcerated for their crimes.

Cochabamba, Bolivia, is home to South Abbotsford (B.C.) MB Church members Tyler and Renae Regehr for this year as they serve with Mennonite Central Committee (MCC). At Casita, they are using their skills to serve some of the neediest children in the country – work that was an answer to prayer.

“I had always had a desire to go to Bolivia, but more than that, when we read the work description it really was an answer to prayer,” Tyler explains. “As Renae has pursued her career in psychology and counselling, one of her aspirations has been to work in some capacity in the prison system. When we found that the job would involve working with children of prisoners – and their parents – we realized this was an amazing opportunity that God was giving us.”

The prisons are much like self-contained cities. There are no bars on windows and inmates are not confined to rooms, which the Regehrs say would be impossible anyway, since the prisons typically house twice or three times the number of inmates that they were built to hold. Rooms are sold or rented to those who have money; those who don’t sleep in the courtyard. Inside is everything needed to sustain them: a chapel, little stores selling goods, a restaurant where inmates can buy meals, woodworking shops, even a library.

Prisoners are given 80 cents a day, which –  even by Bolivian standards – is not enough to live on, so they supplement their income by bartering and working in the shops.

“Because of over-crowding, privacy is non-existent, as is peace and quiet,” Tyler says. “This has helped us to understand why the children often act the way they do.” 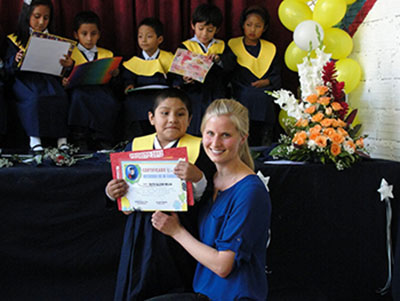 Renae Regehr poses with kindergarten graduate Ruth, who lives with her parents in prison in Bolivia. Renae and her husband Tyler are working with prison families in Bolivia, serving with MCC. The other children in the photo are Jocelyn, Luis Mario, Deymar, Brian, and Alejandra.
Photo: MCC BC

Renae spends most of her day working with the youngest children at Casita, playing games, making crafts, or teaching them the basics of the alphabet or numbers.

“Since they spend the majority of their time in a very crowded, loud, and chaotic environment, they tend to have little concept of order or discipline and are more energetic than typical 3 or 4 year olds,” she says.

The joy of open spaces

The Regehrs describe a day when they took the children to a nearby park to play. The children were so happy to be in a spacious, outdoor environment, they ran from one thing to the next literally screaming with joy.

“I don’t know if I’ve ever seen so many children being that excited for so long a period of time,” Tyler says. “After being in the jails and seeing the day-to-day living conditions, it was no wonder that running and screaming with joy was what they would do.”

Tyler says that perhaps the strangest part of the day is the end of it when they return the children to their prison homes.

“Young children with their little backpacks on saying hi to prison guards who all know their names is a reality that is extremely foreign to people like us coming from a Canadian perspective,” he says.

Both Tyler and Renae agree that despite the obvious challenges, there are benefits to a prison system that keeps families together. Allowing prisoners to contribute to a community even though they are cut off from the outside world is also humane.

Still, living with convicted criminals is not the best environment for raising children, so places like Casita make an enormous difference.

“Casita tries to minimize the negative impacts and utilize the benefits of having families that are still together,”  Renae says.

There are days when the work is discouraging, but the Regehrs are well-supported by MCC staff who provide resources and help the couple understand the Bolivian context in which they are working.

“At the end of the day, we both feel God called us here, and when one of us is down or doubting, the other always seems to be able to come along and point out just how good we have it,” Tyler says.

MCC worked in Bolivia since 1960 with agriculture and water projects, education and income generation programs, and peace projects.