What's New
Ask God which town
Where to from here?
CCMBC National Director attends 2022 ICOMB Summit
MCC Canada and MCC Manitoba sell shared property...
The world appears to be growing darker
Sharing a new and unified language
6 reasons to attend the MWC Global Assembly...
One too many
Just one more
A safe place in Winnipeg
Home Life & Faithfeature articles Seminary president witnesses a miracle – with a little help from some friends 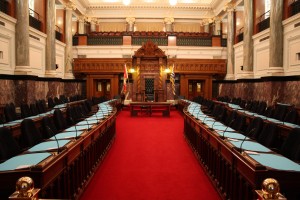 It was a moment he’ll never forget. On Mar. 13, surrounded by polished marble, regal red carpet, and somber politicians, Mennonite Brethren Biblical Seminary Canada president Bruce Guenther looked down from the gallery in the B.C. provincial legislature and witnessed a miracle.

After months of intense negotiations, MBBS Canada obtained a degree-granting charter from the British Columbia government, as the B.C. legislature unanimously voted to pass Bill Pr 402. The charter allows the seminary to issue theological degrees – with its name proudly displayed on each diploma – to graduates this April.

The charter enhances MBBS’s credibility within the ACTS consortium at Trinity Western University, Langley, B.C., and with its Winnipeg affiliate, Canadian Mennonite University. The charter provides the seminary with a greater sense of equality in negotiating partnerships and lays the foundation for independent initiatives in the future.

“Two years ago, getting a charter seemed like such a long shot – such a hard hill to climb,” says Bruce. “But from the outset, we’ve felt God’s urging to move forward. And we knew it would take a network of people from all over our community to make it happen.”

For thirty-five years, MBBS functioned as a binational institution. But in 2011, the school divested and became two separate entities. The MBBS-Fresno (Cal.) campus became part of Fresno Pacific University, and MBBS Canada came under sole ownership of the Canadian MB conference – leaving them without degree-granting status. The seminary board appointed a task force (James Toews, Jack Falk, Dale Wall, and Bruce Guenther) to find a solution.

At first, it seemed improbable that MBBS Canada would be able to obtain a degree-granting charter in B.C. The last theological school charter was granted in 2006. The provincial government had begun  working on a new system to evaluate and approve degree proposals from institutions, so they had placed a moratorium on new charter applications.

But in spring 2012, MBBS stumbled on a surprising opportunity: the government had mistakenly revoked the charter of one of their ACTS Seminaries partners, Canadian Baptist Seminary.

In November, the need to rectify this mistake suddenly swung open the door for both schools to submit private bills, rather than wait for a new system to be implemented. However, the timeline for completing the approvals for inclusion during the spring session of the B.C. legislature was tight. With provincial elections slated for May, the spring session would be abnormally short (Feb. 12–Mar. 14).

Bruce raced to mobilize a team around him, including former civil servant Dale Wall and legal counsel Kevin Boonstra. 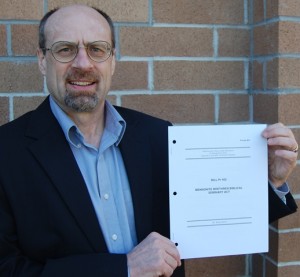 At first, the minister of advanced education, John Yap, was reticent to support the seminary’s bill. So the team rallied support from local MLAs, including Randy Hawes and Marc Dalton, as well as members of the MB constituency who, on short notice, lobbied other local politicians.

In the end, the minister lent his support to the bill – “a huge step forward and an answer to prayer,” says Bruce. The bill was sent to the legislature for introduction, committee review, and final reading. On Mar. 14, the last day of the legislative session, lieutenant-governor Judith Guichon signed the bill.

Behind a simple piece of paper is a story of ordinary people doing extraordinary things with a vision of reaching Canada with the good news of Jesus Christ.

“It’s a reminder that kingdom work gets done outside the brick walls of our churches,” says Guenther. “There are countless lay people who contribute to the well-being of the church and our society.” 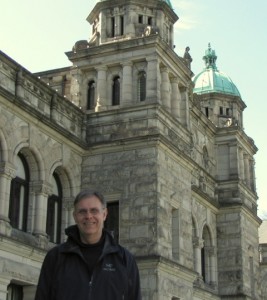 When Dale Wall, member of Saanich Community (MB) Church, Victoria, B.C., was introduced in the B.C. legislature that March afternoon, both sides of the house immediately acknowledged him with spontaneous – and vigorous – applause.

Before retiring in 2010, Dale served some 30 years as a civil servant under Social Credit, NDP, and Liberal governments. His last ten years of work were spent as assistant deputy minister and deputy minister for community and rural development. Dale is soft-spoken, yet exercises considerable influence. “There was no place in the legislature where people didn’t recognize Dale, enthusiastically greet him, and express appreciation for his contributions over the years,” says Bruce.

The goodwill Dale enjoys in Victoria is in no small part due to his deep faith. “There are many connections between faith and civil service,” says Dale. “When elected officials ask for advice, you can influence their agendas. And that advice is flavoured by principles that come out of your faith – principles of justice and respect for people.”

Dale nudged the right people into action through his extensive network of relationships. He guided the team through each step of drafting the bill and garnering the required support.

He also offered valuable advice about negotiating with politicians and civil servants: “I would know if the government officials’ answers were nuanced, and what those nuances meant,” said Dale. And on several occasions, his voice changed the outcome of a meeting.

“Dale’s presence with us immediately gave our project a higher level of credibility,” says Bruce. “Without his quiet wisdom and remarkable network of contacts, the successful completion of this bill wouldn’t have been possible.” 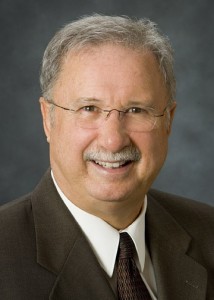 Randy Hawes wears his passion on his sleeve. With 12 years of experience as MLA for Abbotsford-Mission, he cares deeply about serving his constituency.

When asked what prompted him to get involved in the process with MBBS, he said, “Students have worked hard to obtain a post-grad degree, and it wouldn’t be fair to make them wait for a diploma with the MBBS name on it! We had to do the right thing.”

Randy’s sturdy push opened the doors for the seminary team to get a hearing with government officials, including the minister.

Although not a newcomer to politics, Marc Dalton is still in his first term as an MLA, elected in Maple Ridge-Mission in 2009. With his background in teaching and church ministry, Marc was appointed parliamentary secretary to independent schools last September.

For Marc, a member of Maple Ridge Community (MB) Church, the intersection of faith and politics is all about service. “I consider my work as an MLA a privilege,” he says. “It’s an outflow of serving the Lord.”

Marc’s servant heart and prayerful expectancy “made a real difference in this process,” says Bruce. “He cared enough to invest considerable time and energy on our behalf – and he was willing to pray with us.”

“We faced many legislative and other complications. But I’m so thankful to have played a part in moving the bill forward,” says Marc.

Multi-talented president at the helm

Unassuming, with some stereotypical “professor” quirkiness, Bruce’s tenacity and faith carried the project to completion. “Bruce was the leader of this effort in every sense,” says task force member James Toews. “MBBS and the Canadian conference owe him a deep debt of gratitude.”

“I was amazed by Bruce’s patience and even-handedness,” says Randy, with a chuckle. “He was amazingly calm, even when I wasn’t.” Dale agrees: “Bruce is resourceful, wise, and creative in how he leads. He worked in such a fluid way in a challenging context.” For example, the day MBBS’s last legal notice had to be publicized in the B.C. Gazette, Bruce called the editor for a scanned page, only to learn MBBS’s notice had been missed. “They stopped the presses and we got it in!” says Bruce.

Throughout the process, Bruce felt the weight of his leadership. “As president of MBBS, I allocated a large amount of time and resources toward this project. No one could guarantee the outcome, so I was certainly relieved and satisfied when we accomplished our goal. I give thanks to God for his sustaining power and presence throughout the process.”

This will be part of Bruce’s legacy. More than a piece of paper, the bill is a reminder of the enduring power of prayer and faithfulness – and the importance of community when it really matters.