What's New
MWC Assembly small but full of joy
Bad back doesn’t hold back MDS volunteer
Transition in CCMBC National Faith and Life Leadership
Leading through the trauma of covid: Part three...
The church distracted: When the main thing is...
Remote wilderness rescue turns into service with MDS...
How open is your mind?
Following Jesus together across barriers
2022 National Faith & Life report to the...
CCMBC 2022 national assembly summary
Home News Rebuilding in the Philippines

Rebuilding in the Philippines 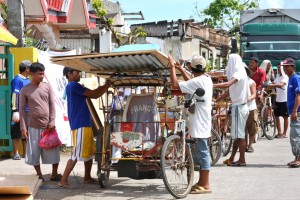 MCC is supplying building materials, including plywood and tin sheets similar to those being loaded onto this bicycle-powered rickshaw, to almost 3,000 families whose homes were destroyed by Typhoon Haiyan. In addition, MCC is paying local people to build the houses in the towns of Naval and Dulag. MCC Photo by Laura Armstrong.

The more than $1-million response will focus on the hardest-hit sections of the coastal towns of Naval in Leyte Province and Dulag in Biliran Province. They are two of many towns in the Philippines where homes, livelihoods and public buildings were devastated by the hurricane that displaced 4.1 million people and destroyed 1.1 million homes.

Working through Church World Service (CWS) and its partners, MCC is providing plywood, nails, cement, lumber and metal roofing material to build simple, sturdy shelters. Until now, many people have been living in tents or with family members.

“You see the suffering of so many,” says Laura Armstrong, a short-term MCC worker who was in the Philippines in December to develop MCC’s response.

“You know that around every corner, someone has been impacted by the storm, is experiencing hardship and loss and yet you have to make decisions with the money that you have to work with,” she says.

MCC donors gave more than $4.2 million (CDN) in response to the disaster. Initially $200,000 was used for emergency food baskets and household supplies. Future projects will include more building, agricultural support and training pastors in trauma healing and disaster response.

On this project, CWS’s partners will work closely with community leaders to choose the recipients who are particularly vulnerable, such as families that have single parents, a family member with a disability or many children.

Construction will be done, in part, as a cash-for-work project by community people who are not receiving shelters but have no stable income. The work will be directed by skilled workers trained in disaster-resistant construction.

“It’s important that local people receive a wage to do the construction work rather than workers brought in from outside the affected area,” said Jeanne Jantzi, one of MCC’s area directors for Southeast Asia.

“People whose lives have been affected by the typhoon need work because their ability to farm or fish has not yet been restored. If they can work on construction, not only are community people getting help with shelter, but people are also able to regain a livelihood and care for their families,” Jantzi says.

Each family that gets a new home also will receive a welcome-home kit of basic kitchen supplies, including frying pans, glasses, plates, kettles, dishes and other essentials.

MCC has set aside additional funding for a second phase of the project to provide shelter for 3,000 more families in Leyte city. Although MCC has not had long-term staff in the Philippines since 2005, one worker will be placed there for the next year to oversee MCC’s response.