MBs respond to the homelessness crisis

When Fairview-Louth MB Community Church outgrew their rural location west of St. Catharines, Ont., and decided to relocate to a more central/south-end location in 2003, few would have guessed just how transformative the move would be.

“We didn’t know what we were getting into,” says Tim Arnold, outreach pastor at what is now known as Southridge Community Church.

The decision to relocate was the result of several factors including a transition in leadership, prayer, and a growing desire to have greater impact in their city, particularly among poor and marginalized people. “As we delved into Old Testament prophets like Micah, and looked at Jesus’ ministry,” says Arnold, “we became increasingly aware that our lifestyle needed to have an element of reaching out to the marginalized.”

Part of that required being closer to the city’s 130,000 people.

It didn’t take long for the congregation to be confronted by some harsh realities: an estimated 4,428 individuals – including families – are homeless or at risk of homelessness across the Niagara Region, where Southridge is located. Within months of the move, the church responded by opening its doors (as part of St. Catharines’ Out of the Cold program) to provide a warm place for people to sleep during the harsh winter nights.

The city needed longer-term solutions that could better provide a sense of place, and assist homeless residents to get back on their feet. Before long, officials approached Southridge to see if the church would partner with the city to start a full-time, year-round shelter.

The congregation obliged and, in 2005, launched the 35-bed Southridge Shelter out of what was initially the youth wing of their facility. With two-thirds of the shelter’s funding coming from the Region and the remaining third from the church, Southridge is now the largest provider of emergency shelter in Niagara, and is most often at or near capacity.

Residents of the shelter typically stay for about a month, and include everyone from refugees and newcomers, to people living with mental health issues or addictions, to those who have just lost a job.

While Arnold wishes the need weren’t so great, he knows his church is playing an important role. “Our goal is to provide people with stability and a loving community,” he says. “We help prepare people for their next steps, whether that is waiting to get into supportive living arrangements, affordable housing, or treatment programs.”

Arnold makes it clear the shelter is not a separate entity from the church but a core part of Southridge’s identity and mission. On a weekly basis, staff and upward of 200 volunteers from the congregation help prepare meals, run programs, and spend time with the residents. Many of those residents, says Arnold, have become part of the church community.

“Our prayer for the shelter is that it would be more than just a program for alleviating people’s tangible needs,” says Arnold. “It’s about facilitating relationships and experiencing what God has to teach us through the people who matter so deeply to him.”

The situation in St. Catharines isn’t unique. Canada has a growing housing crisis that is leaving people on the streets or precariously housed. The causes are varied: rising rents, insufficient incomes, shortage of affordable housing, and political wrangling.

A recent parliamentary report estimates the number of homeless people in Canada to be as high as 150,000–300,000. Those most at risk for homelessness include recent immigrants, Aboriginal people, and children in lone-parent families.

Just as the prophet Jeremiah called on the Israelite exiles to “seek the peace and prosperity of the city to which I have carried you” (Jeremiah 29:7), MBs across Canada are seeking the well-being of their neighbourhoods by extending a sense of place and home to people who are homeless. And as they reach out, they are having a profound impact.

Across the country from Southridge, the same focus on home inspires B.C.’s More Than a Roof Mennonite Housing Society (MTR). Started almost 30 years ago by two Christian real estate developers who realized the desperate need for more affordable housing in and around Vancouver, MTR (first incorporated as MCC Housing) built its first affordable housing project in 1986. Today, MTR has successfully built 10 affordable housing communities, providing homes to some 1,100 people, including single mothers, people with severe chronic mental illness, and those struggling with addictions.

Although MTR has cultivated close business relationships with external stakeholders and various levels of government to secure funding, land, and regulatory approval, they work closely with local churches and continue to be inspired and led by a deep Christian faith. 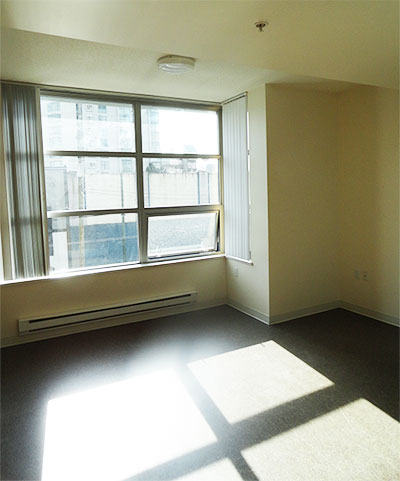 A room in MTR’s Kindred Place.
Photo by Simon Lewchuk 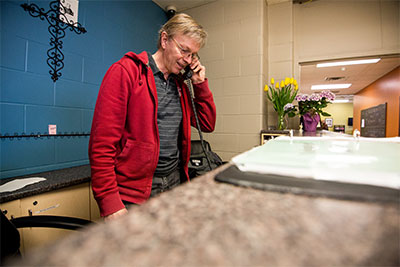 A volunteer works the phones at Southridge’s shelter. 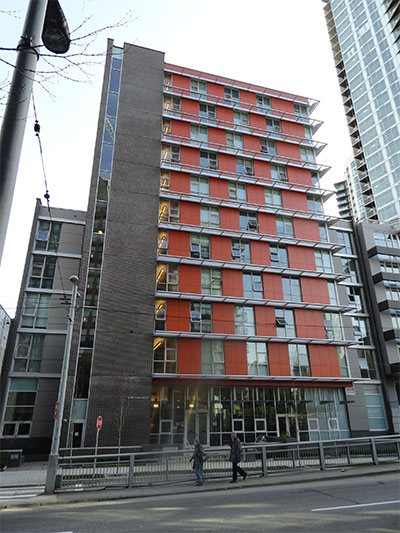 While MTR’s nine-member board comes predominantly from MB churches, the organization’s staff and volunteers represent Christians from across the denominational spectrum. Each week, they gather for prayer and encouragement in their collective ministry of providing “more than a roof” to people in need.

Each MTR site is unique. Some are designed for families, others for singles, including specially designated units for people in addiction recovery or living with mental illness. Each boasts bright, roomy suites and on-site staff. Many of the sites also regularly host community-building programs such as summer barbecues and holiday dinners. MTR has even assisted residents in starting on-site microenterprises, and runs a financial literacy and goal-setting program.

Walking through three of MTR’s housing communities in Vancouver’s Yaletown neighbourhood, Epp smiles and greets each resident by name. It’s evident that Epp “walks the talk” when it comes building a place to call home.

Stable housing makes all the difference

In his 20 years with MTR, Epp has seen first-hand how important that sense of home is for a person’s well-being. Epp and MTR know from experience what researchers are just starting to catch onto: providing someone with a decent, affordable place to live, along with a supportive community, is an important first step in enabling someone to address the deeper issues they face. (Known as the “housing first” approach.)

Such was the case with Heather, a resident at MTR’s 87-unit Kindred Place in Yaletown. After her husband was killed in an accident, Heather turned to what she knew to cope with the tragedy: drugs and alcohol. She ended up in the sex trade, got into trouble with the law, and found herself homeless.

“I prayed for the desire and the willingness to get my life back on track,” recounts Heather. “It took many avenues, whether it be the penal system, or the recovery homes, or the treatment centres [to get me here], but it’s stable housing” that made the difference, she says.

The secure, loving environment offered by MTR enables residents to improve their well-being and experience God. Heather now works as a support counsellor in a women’s recovery program. She says that she’s found peace because she’s finally living the way God intended.

Although Heather’s story is unique, those of other MTR residents’ all have common threads according to Epp. “People need someone to put their arm around them and to tell them they care,” he says. (Watch Heather and others tell their story here.)

Light in the darkness

Faces of More Than a Roof

“As Christians, we’re called to embody a message that profound change is possible, to bring light to darkness. For the tenants we do life with, we have a 24-hour opportunity to embody the gospel,” says Epp.

Perhaps not surprisingly, MTR’s impact has reached far beyond its residents. As a leader in responding to homelessness in B.C., MTR has come to be held in high regard by community leaders, business partners, and politicians of all stripes. Epp sees this as an incredible opportunity for Christian public witness, living out Jesus’ words in Matthew 5:16 to “let your light shine before others, that they may see your good deeds and glorify your Father in heaven.”

Despite the difference that MTR continues to make, Epp maintains that more is needed. “Homelessness is a very complex social issue. The enormity of the problem is such that Christians can’t tackle it on our own. We need the combined resources and expertise of multiple institutional partners and multiple levels of government working together toward a common goal.”

Epp’s sentiments are echoed by others across the country. Despite the ongoing efforts of churches, non-profits, and government, overall progress against homelessness has been slow. There simply isn’t enough affordable housing to keep up with the demand.

“Homelessness in Canada has been exacerbated by a growth economy,” says Epp. The effects of urbanization, globalization, and a relentless focus on economic growth-at-all-costs have left many people struggling to get by.

According to housing experts, the federal government’s strategy begun in the 1990s of downloading responsibility for affordable housing to the provinces and territories has only made things worse. Lacking the necessary fiscal capacity to invest in building, maintaining, and operating affordable housing, these levels of government have been unable to contain the crisis.

This February, more than 40 national church groups, affordable housing organizations, and professional associations called on the federal government to develop a national housing strategy. The bill failed, but it provided opportunity to renew dialogue among stakeholders working together to address this pressing issue. 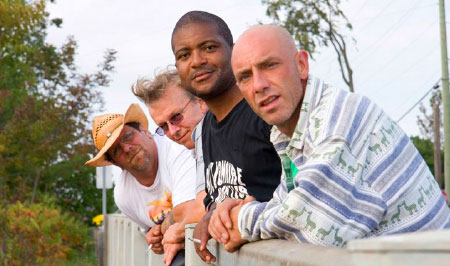 Back at Southridge, Arnold affirms the need for a multifaceted, comprehensive approach to homelessness in Canada while maintaining the central role of relationship. “Various supports are needed – including more funding – but a sense of home is crucial. Marginalization, at its core, is a relational issue.”

For Arnold and Epp, providing a sense of home to poor and marginalized people is a natural, core expression of their faith and a tangible way to help people in need.

But there’s more. Southridge’s shelter has become the main avenue for new people coming to the church. “While it was never part of our strategy, the shelter became an entry point into the church,” says Arnold.

“People are looking for more of a ‘show me’ church than a ‘tell me’ church, and to participate more than spectate. [The shelter] has drawn many people who weren’t into or had given up on church, but wanted to be involved in serving their community.”

Though their efforts may only be part of the solution to homelessness, Arnold and Epp – and the countless others ministering alongside them – are discovering open doors for reaching their broader communities.

—Simon Lewchuk attends The Journey (MB church), Ottawa, Ont., and is a policy analyst at Citizens for Public Justice.

Visibly homeless: people sleeping on the streets or in emergency shelters

Hidden homeless: people who are “couch surfing” or have short-term, insecure housing arrangements, and are at high risk of homelessness

Core housing need: people who spend more than 30% of before-tax income on housing, or live in homes in need of major repair or that are overcrowded

Affordable housing: housing that costs less than 30% of before-tax household income, although often any below-average market rents are deemed to be affordable housing; delivered through social housing, non-profit housing, or private rent supplements

Homelessness in Canada by the numbers


How can Christians respond?