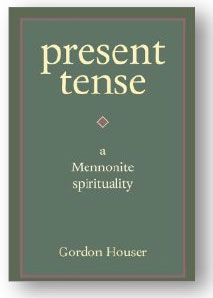 A gentle and personal book, present tense covers eight main distinctives Gordon Houser sees as characterizing Mennonite spirituality: practice, patience, peace, politics, play, prayer, perfection, and presence. The book offers practical reflections on how these eight characteristics have been carried out by Mennonites, and how readers might observe them in their own lives.

Each chapter explores the subject with snippets of Scripture, theologians, books, poetry, Houser’s own experience, and even rock and roll. Houser opens the book emphasizing this is his “observation and opinion,” a “limited perspective,” and one point of view out of many possible alternatives. The book is not a theological treatise or exhaustive historical account of Mennonites but a set of reflections and observations of some of the unique (and not-so-unique) ways Mennonites practise their faith.

Houser has the advantage of both an insider and outsider view of what makes Mennonites Mennonite. Not raised in a Mennonite culture or church, he came to the denomination later in life. This gives him a unique perspective and a degree of detachment which is refreshing. A Mennonite “by choice” since the 1970s, Houser is longtime associate editor of The Mennonite (U.S. denominational magazine), and therefore also benefits from an insider’s view.

Houser’s own experience is clearly grounded in the ethics popularly (and controversially) expressed in John Howard Yoder’s The Politics of Jesus (1972) and the work of his contemporaries. The author makes frequent reference to Yoder, as well as “intentional community,” and the somewhat radical Christian pacifism promoted by this school of thought. Readers not familiar with these ideals may be confused by Houser’s references. In addition, some readers may find the author’s views and material somewhat New Age or “worldly.”

Houser incorporates a broad base of sources, and doesn’t follow a strict exegetical (explanatory) method. This may be off-putting to some who prefer a stronger scriptural basis. He’s also very comfortable drawing from the traditions and ideas of other denominations, notably the mysticism of Eastern Orthodox Christianity, which conservative Mennonites could find objectionable. Houser openly acknowledges this several times, which shows he’s aware his approach will not suit everyone.

On the other hand, some readers may find his style not progressive or forceful enough; as previously said, Houser’s style is gentle and he takes pains to stress many things are his own particular point of view. However, many Mennonites (and Christians in general) grew up in a world where the ideas expressed by The Politics of Jesus and other books had already become mainstream; these readers are ready for (or practising) a more radical set of ideas such as those embodied in the “red-letter Christian” and “new monastic” movements (e.g., Jonathan Wilson Hartgrove, Shane Claiborne, etc.). In this sense, present tense may not push the envelope far enough for how many of today’s Mennonites see themselves and their obligations as Christians in the world.

That Houser is a lover of books and words is clear throughout present tense. He often plays with words, muses on their meanings, interjects thoughts in parenthesis, and openly delights in the written word (a fact he identifies as a personal vice). For other lovers of the written word, his style will likely be appealing; however, for readers who prefer a more straightforward type of writing, Houser’s penchant for word-play may be distracting. He also occasionally uses terms the average reader will likely not know without explaining them, although these are few and far between.

While I didn’t gravitate toward any one particular topic from present tense, I found interesting ideas throughout, as well as quotes from other sources I intend to explore. The chapter on “play” was unquestionably the hardest to read, as it attempts to draw some large connections I found difficult to grasp.

Overall, this book is warm, sensitive, humorous, and always accessible despite subject matter which could easily become academic. Most readers should find some food for further reflection and study. For Mennonites, this outsider’s inside perspective should cause us to more actively think about our own faith and cultural traditions.

—Lauren Klassen is a member at Scott Street MB Church, where she serves as chair of the audiovisual committee. Married to Michael, she has two children.

To meet the Lord on the air