What's New
Through the conflict, life carries on in Ukraine
A FOCUS on Mission
Must Patience Be So Slow?
Harold Jantz: A Heart for the Mennonite Story
Lorlie Barkman: A Life of Creative Engagement
Last Days, First Days
Women in Ministry: Bertha Dyck
January Moment in Prayer “Holy Spirit—Fill Us!”
The Church as the Patient Body of Christ
Advent: Making Much of Jesus: Christmas Day
Home Arts & Culture The positive side of power

The positive side of power 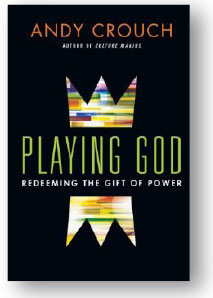 “Power is a gift.” These are the opening words of Andy Crouch’s book Playing God: Redeeming the Gift of Power.

We do not always see it that way. Preachers rail against the dangers or the lure of power. Churches often talk of “power struggles” between different factions in the congregation. Many see power as a corrupting agent, something to be controlled and subdued. Indeed, we may be more inclined to agree with Tolkien’s Lord of the Rings character Gandalf who warns fellow wizard Saruman, “There is only one lord of the rings…and he does not share power!”

Crouch wants to redeem power from the perception that it’s a struggle involving domination of one over many – all or nothing. His premise is that power is found not in the ability to dominate and control but in the ability to create and empower.

Our presupposition that power is predominately about coercion is built on a distorted view. Crouch seeks to provide a view of power that recognizes it as a good gift from God. “True power is creation, and the truest power is resurrection, the new creation that can restore flourishing even when violence has done its worst.”

The power to create

Crouch lodges his argument in the Genesis creation narrative. In it, we find the way God exercises power is not dominating or oppressive toward creation, but inspiring and encouraging. God exhorts creation to “be fruitful and increase in number; multiply on the earth and increase upon it” (Genesis 9:7 ). In other words, keep being creative.

God gives humans, the bearers of his image, power to ensure creation flourishes in its ability to create. This is a beautiful picture of power, one of desiring the best for the other; one of taking satisfaction in seeing the other flourish. As a parent, it is the kind of power I hope to exercise toward my children. I’m not threatened by their growth and creativity; in fact, I use my power to provide opportunities for them to grow and prosper.

It’s when power becomes self-indulgent or violent that it is “deadly to God’s original fruitful purposes” (131). At that point people (or institutions) begin to “play god” (idolatry), seeking to further their own will rather than embrace their role as image bearers.

Crouch’s writing is solid and he dots the pages with stories, particularly from his work with International Justice Mission. That said, the book is not always an easy read and the reader can get lost in the size/scope of the discussion and frustrated with the enormity of the “solutions” Crouch suggests at the end.

Each of the book’s four parts includes a biblical exploration in which he works through a passage based on the central ideas of the section. The ideas will not be new to many Anabaptist minds. Anabaptists have long argued that violence in any form is the antithesis of the way God exercises power in the world. Christ provides the example as he exercises power over death itself through the cross.

In those moments when Jesus could embrace power through violence, he chooses another way, a way that encourages peace and flourishing for others. Likewise, he exhorts his disciples in Matthew 20:25–28:

You know that the rulers of the Gentiles lord it over them, and their high officials exercise authority over them. Not so with you. Instead, whoever wants to become great among you must be your servant, and whoever wants to be first must be your slave– just as the Son of Man did not come to be served, but to serve, and to give his life as a ransom for many. (italics added)

Ironically, though Crouch references the above passage, he doesn’t view pacifism favourably. He sees it as giving evil the “silent treatment,” choosing to do nothing about violence rather than facing it. While he does not write exhaustively on the subject, he seems to misunderstand the Anabaptist position on nonviolence. He sees a role for forceful coercion against violent powers as a way of bringing them under control, matching violence with violence to bring them back into their roles as image bearers. As Anabaptists, we question how often that accomplishes the sought-after redemption.

Crouch neglects the power of peaceful force: the ability to subdue evil and encourage flourishing through creative, nonviolent means. With Jesus as the ultimate example of this, we can also look at people such as Gandhi and Martin Luther King Jr., along with organizations (such as Christian Peacemaker Teams) that choose to confront violence with peaceful energy.

Crouch writes on an important topic for individuals and institutions alike; however, it’s hard to picture where this book can best be used. Most small group gatherings will find it a little inaccessible. Its structure and format provide a potential outline for a preaching series on the topic of power, although I would not recommend using it as the only resource. (Adding other books, such as Marva Dawn’s Powers, Weakness, and the Tabernacling of God would be helpful.) Perhaps a church leadership board can spend some time with the book; Crouch has a highly redemptive view of institutions – perhaps quite necessary in this anti-institutional age.

Power is a topic worth taking time to consider, and though his ideas may not be new, Crouch provides a helpful presentation in Playing God: Redeeming the Gift of Power.

—Dave Ens is campus pastor at One88 – a campus of Eastview Community Church that focuses on being a redemptive presence in Winnipeg’s downtown (one88.org).

Something bigger than addiction

Change happens in the kitchen

One88: a place to grow and learn

As I read this summary, I was deeply impressed with the enormity of Gods gift of power to me. Me? It’s hardly imaginable and my responsibility is overwhelming. Thanks, Dave, for that insightful summary.