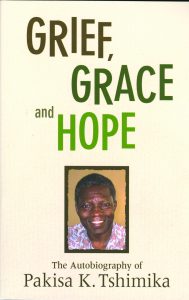 Grief, Grace and Hope: The Autobiography of Pakisa K. Tshimika

Lately I have read several autobiographies by people I have known personally who have overcome great obstacles to achieve their goals. Pakisa Tshimika’s story tops them all with the courage he displays in triumphing over adversity. In the introduction, Tshimika quotes Henri Nouwen: “The question is not how to avoid loss…but how to choose it as a passage, as an exodus to greater life and freedom.”

Tshimika begins his story not with the obvious tragedy in his life (breaking his neck in a car accident, thus having to relinquish his dream of becoming a medical doctor), but by recounting the suicidal death of his older brother due to depression. It is Tshimika’s way of telling us that his brother’s hopelessness was the greater tragedy.

Doctors told Tshimika after his accident that there was no chance of recovery. When he returned to his adopted home in Fresno, Cal., on a stretcher (he is a Congolese who was studying in the U.S.), a reporter asked if he had any hope left. His answer: “My hope is in God, who opened the door for me to study in this country. God will use me even if I am paralyzed and confined to a wheelchair.” Thus began a life of discovery of God’s power through human frailty.

Tshimika faced many other losses and shattered dreams in his life after the initial one that rendered him physically disabled. He shares them very candidly with his readers.

A chronology of Tshimika’s life, placed before the introduction, provides a handy reference point for the various chapters. The photographs are clear and enhance the story of this man who, in spite of severe handicaps, received his doctorate in public health, and returned to Congo to work with MBMSI and public health organizations. After his mother’s death, he founded Mama Makeka House of Hope in her honour, to assist and give hope to the victims of violence in war-torn Congo. He also worked with Mennonite World Conference, holding Global Gift Sharing Workshops and later becoming associate general secretary. He continues to work with MWC and other church-related agencies.

This book will continue to give hope to many, just as the author’s life has done. It is an inspirational read.

Hope: God is with us

Congolese brothers in Christ build on a dream