What's New
Through the conflict, life carries on in Ukraine
A FOCUS on Mission
Must Patience Be So Slow?
Harold Jantz: A Heart for the Mennonite Story
Lorlie Barkman: A Life of Creative Engagement
Last Days, First Days
Women in Ministry: Bertha Dyck
January Moment in Prayer “Holy Spirit—Fill Us!”
The Church as the Patient Body of Christ
Advent: Making Much of Jesus: Christmas Day
Home MB HeraldFeatures One final step 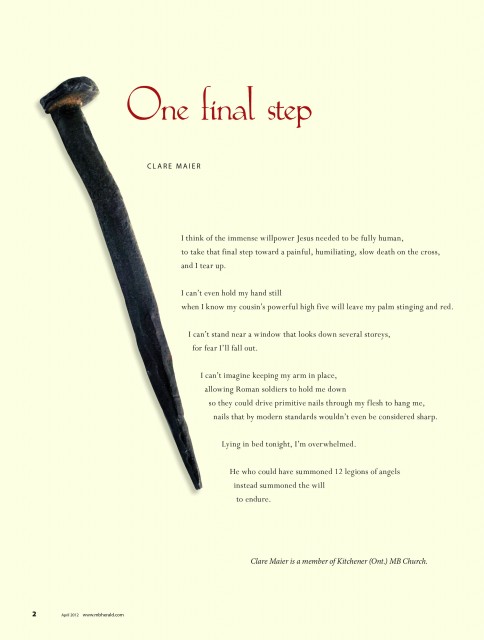 I think of the immense willpower Jesus needed to be fully human,
to take that final step toward a painful, humiliating, slow death on the cross,
and I tear up.

I can’t even hold my hand still
when I know my cousin’s powerful high five will leave my palm stinging and red.

I can’t stand near a window that looks down several storeys,
for fear I’ll fall out.

I can’t imagine keeping my arm in place,
allowing Roman soldiers to hold me down
so they could drive primitive nails through my flesh to hang me,
nails that by modern standards wouldn’t even be considered sharp.

He who could have summoned 12 legions of angels
instead summoned the will
to endure.

Clare Maier is a member of Kitchener (Ont.) MB Church.

Hope for the shadow people