Mothers and daughters learn about HIV in Tanzania

Tears flow freely at Binti Mama (daughter mother) gatherings as mothers and their teenage daughters talk openly about issues such as HIV and AIDS.

Led by an intergenerational team of students, teachers and women, the gatherings provide a safe setting for listening and learning across generations.

“They dance, sing, eat and share stories of what happened to them,” says Salome Lally, a program coordinator at Mwangaza Education for Partnerships. “People cry a lot when others tell their stories.” 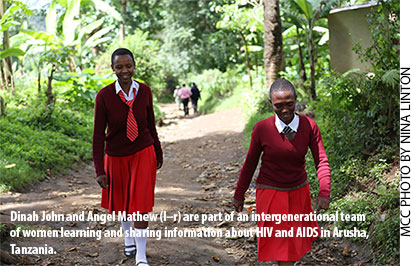 Female students in secondary schools represent one of the highest risk groups for new infections of HIV in Tanzania, says Lally. To increase awareness and understanding, Mwangaza has incorporated HIV and AIDS training in its community health programs for more than 10 years.

In partnership with Mennonite Central Committee (MCC), Mwangaza now trains and supports intergenerational teams of women to lead seminars and be advocates for healthy lifestyles in their schools, churches, and communities. Mwangaza is an educational partnership of Evangelical Lutheran Church congregations in Tanzania and the U.S.

The training deals with HIV and AIDS, violence against women, life skills, conflict resolution, and how health information, cultural practices, and behaviours relate to healthy lifestyles. Participants learn how to use art, music, drama, and presentations to share this knowledge with others.

John says when the team makes presentations it is not unusual for older women to be surprised that teenage girls have so much information on issues affecting girls and women. But what she appreciates the most is the opportunity for her and other teenage girls to candidly ask older women about health issues.

“It’s a good idea because there are information gaps in both generations – it’s especially good because we can get information from them (older women).”