What's New
A FOCUS on Mission
Must Patience Be So Slow?
Harold Jantz: A Heart for the Mennonite Story
Lorlie Barkman: A Life of Creative Engagement
Last Days, First Days
Women in Ministry: Bertha Dyck
January Moment in Prayer “Holy Spirit—Fill Us!”
The Church as the Patient Body of Christ
Advent: Making Much of Jesus: Christmas Day
Advent: Making Much of Jesus: Fourth Advent
Home News The “miracle gathering”

When the “iron curtain” fell and Soviet citizens could openly be Christian, Western Canadian Mennonite Brethren started Logos Canada, an agency to answer their a desire to bring the gospel message to the people in the former Soviet Union. (See “Logos Canada: 25 years”)

Logos Canada trains Christians in the former Soviet Union to evangelize others. These trainees have found themselves pastoring churches and seeing amazing growth. “But for those outside the major cities, it can be lonely,” says veteran Logos board member Elmer Stobbe of Abbotsford, B.C. 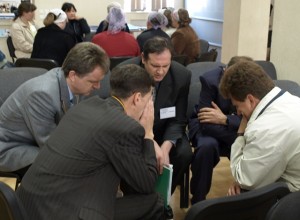 When Stobbe realized leaders reaching new believers felt isolated, he promoted a major gathering to foster a broader sense of community among the new leaders. “They had no sense of the amazing network of help that was behind them,” says Stobbe.

Furthmore, “These preachers were educated in the Bible,” Stobbe says, “but everything they knew about running a church came by the seat of their pants.”

He followed advice to invite couples to attend. “Men said they got together locally, but the wives didn’t even have that contact,” he says.

The conference on the theme of servant leadership was held in 2008 at St. Petersburg Christian University, the training school Logos supports.

Johann Matthies of MB Mission brought “a strong prophetic kind of word that seemed to be the word of the Lord for the hour,” wrote author and former Moscow Mennonite centre volunteer Maureen Klassen about the teaching on servant leadership.

“[Matthies’s] words seemed to strike a chord with the gathering, since he too grew up under Communism, spoke their language and understood their culture and struggles. He reminded them that they were used to the strong Soviet style of authoritarian leadership, but that Jesus came to teach us a different style, servant leadership.

“He spoke of the way Jesus humbly served his disciples, washed their feet and showed them the more gentle way of love, ultimately laying his life down for them. This lesson seemed to go right to the heart of a different way of doing ministry in the former Soviet lands, and was echoed in the times of prayer and fellowship that followed.” 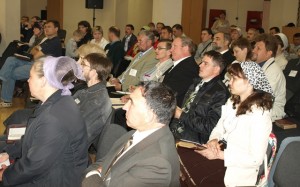 By all written accounts, it was a major event, a landmark within the Christian evangelical community of the former Soviet Union where a previously isolated set of believers came together.

“For example,” said Stobbe, “there was a question whether the pre-perestroika underground church adherents would take communion with the more liberal believers who came to faith after perestroika.” It was a groundless concern. “They all took communion – 100 percent.”

While adjusting to new realities, Logos Canada continues to support church building and replanting of the gospel by indigenous missionaries, in addition to funding medical and humanitarian initiatives and summer camps.