What's New
How sweet the sound
One MCC Thrift Store Began With a Few...
A Hunger for Conversation
Getting the mental and emotional rest you need...
The Patience of God
2023 Spirit of MDS Fund accepting grant applications
October 2022 update from the CCMBC Executive Board
Arnold Community Church hosts block party to thank...
When Spring returns
An autumn reset
Home News MCC’s peacebuilding work expands in Middle East 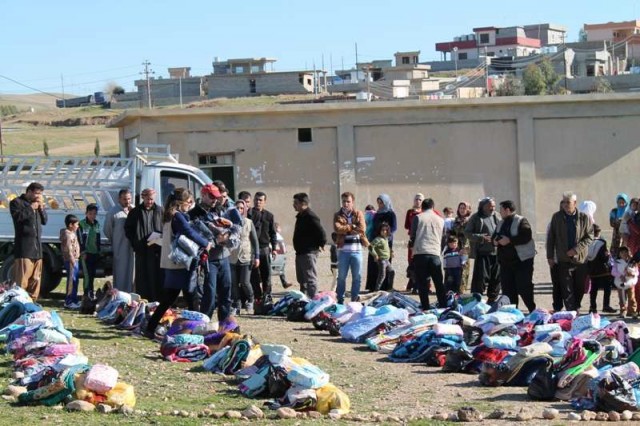 MCC will work with its partner organization, Iraqi al-Amal (IAA), to provide training to 900 students and 250 teachers in Najaf, Baghdad and Erbil governorates in Iraq. The photo above shows MCC’s work with IAA in another project – the distribution of humanitarian assistance to displaced Iraqis and Syrian refugees in the Kurdistan Region of Iraq. Photo by Salar Ahmed.

In a region of ongoing conflict and tension, supporting peace and promoting dialogue between religious communities continues to be a fundamental mission for Mennonite Central Committee (MCC).

A $500,000 grant from the Canadian government will allow MCC to enhance its peacebuilding work in Iraq, Syria and Lebanon.

In keeping with MCC’s approach to all of our projects, we will work with partners in each country to undertake peacebuilding activities.

“I believe our peacebuilding efforts are most significant when they are actively working with networks that are already in place,” says Krista Johnson Weicksel, MCC’s peacebuilding coordinator. “This is the way to prevent violence from erupting.”

The Iraqi Ministry of Education has identified the prevention of sectarian violence as a priority. MCC will work with partner Iraqi al-Amal Association to change the civics curriculum in schools in Najaf, Baghdad and Erbil governorates. Nine hundred students and 250 teachers will receive training in cross-cultural communication, with emphasis on active citizenship and acceptance of other cultures and religious values.  The Ministry of Education says if this project is successful, the curriculum could be used throughout the country.

In Syria, MCC will continue its long-term partnership with Forum for Development, Culture and Dialogue. Young activists and community leaders will receive training on citizenship and inter-religious dialogue, and some will be provided funding for initiatives within their own communities. Up to eight local projects could take place in Homs, Damascus, Aleppo, Tartous and Latakia governorates.

In Lebanon, where tensions between religious groups are growing, a series of workshops will develop strategies on mitigating and resolving inter-religious conflict.  One hundred teachers and community leaders in Mount Lebanon and North governorates will participate. The strategies will be used at a local level to assist collaboration between groups. MCC will work alongside its partner, Permanent Peace Movement.

This peacebuilding work across the region culminates with a conference in Beirut, where participants from projects in the three countries will gather.

“They will come together to share stories, resources and curricula with one another and with religious leaders,” says Johnson Weicksel. “This will all lead to a statement about religious co-operation in the entire region.”

“War and conflict are costly,” she says. “By focusing on building peace and preventing violence, we are actually investing in a better, more sustainable future.”

The funding for these projects comes from the Office of Religious Freedom, which operates within the Department of Foreign Affairs, Trade and Development Canada.

Peacebuilding and inter-faith dialogue have long been a major focus for MCC in the Middle East. Our permanent presence in the region began in the late 1950s. In the 1960s, MCC registered as an organization in Jordan and Israel.

MCC has also been involved in ongoing relief work in the Middle East, including providing humanitarian assistance to refugees and displaced people. Through our Syria and Iraq crisis campaign, MCC has provided more than $30 million in support. This response includes food, non-food items such as blankets and hygiene kits, shelter, education and trauma healing.

MCC is thankful for all donations to our campaign. To learn more about our work in Syria and Iraq, visit http://mcccanada.ca/syria-iraq