MCC works to eliminate temporary housing in Haiti after 2010 earthquake 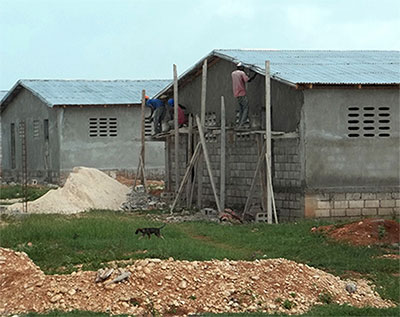 MCC-supported construction of 100 homes (50 duplexes) in Cabaret, Haiti, is projected for completion by late February, allowing about 500 people currently living in tents to have permanent houses.
MCC Photo: Patrick Nelson

Housing was in short supply even before the earthquake, according to Kristen and Wawa Chege, Mennonite Central Committee (MCC) Haiti policy analysts. The quake on January 12, 2010, worsened the situation – more than one million people were displaced from their homes.

To address this urgent need, MCC is working with its partner, SKDE (a Haitian Creole acronym for Christian Center for Integrated Development) to build 100 houses on the outskirts of the capital city of Port-au-Prince. Work is expected to be complete by the end of February and will mean that about 500 people now living in tents can move into permanent housing. The development in Cabaret will include a community centre, market, and playground.

MCC is also currently expanding a vocational training program in Desarmes, a community about 50 kilometres northeast of the city. Much of the funding for these projects is coming from the Canadian International Development Agency.

MCC Haiti’s earthquake response has been effective in addressing needs in many people’s lives, said Kurt Hildebrand, an MCC representative in Haiti. “However, the country’s recovery overall continues to be slow and full of challenges.”

There still is no centralized government housing authority to manage land ownership, zoning, or planning, including where and how to build new permanent housing. It’s not uncommon for several people to have papers claiming the same land. The International Organization for Migration says about 360,000 people still live in tent camps.

With 75 percent of tent camps located on private land, three years later these land owners are resorting to forceful evictions, with support from police and local officials.

MCC Haiti will continue to build houses alongside local partners, while supporting Haitian organizations that are pressuring their own government to provide permanent housing. In Canada, MCC Ottawa is supporting Under Tents – an international campaign to win housing rights for Haiti’s displaced people.

More than $16 million has been dedicated to MCC’s earthquake response in Haiti. This includes contributions from donors and funding from the Canadian International Development Agency (CIDA).

To date, $9.8 million has been spent on 52 projects either completed or underway. The remainder of the funds will be used in the next two years.