What's New
Abortion, the image of God, and faithful witness...
Choosing motherhood: The sacrifice of honouring life
MWC Assembly small but full of joy
Bad back doesn’t hold back MDS volunteer
Transition in CCMBC National Faith and Life Leadership
Leading through the trauma of covid: Part three...
The church distracted: When the main thing is...
Remote wilderness rescue turns into service with MDS...
How open is your mind?
Following Jesus together across barriers
Home News MCC taps teachers’ memories 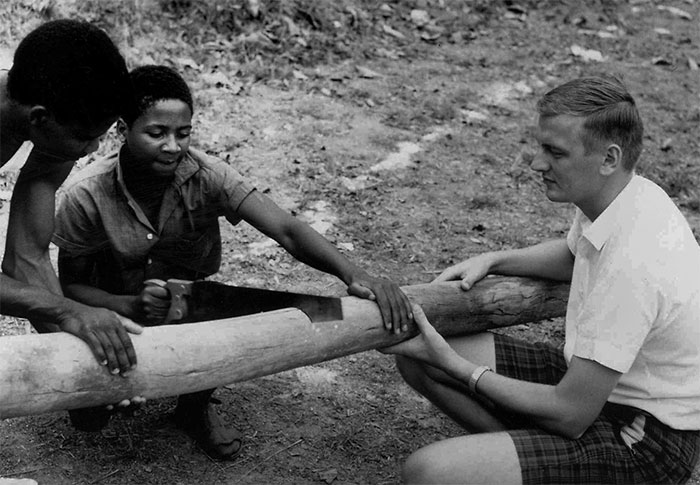 Tap memory bank 1: In 1965, Ron Mathies works with students to ready a pole and a hoop for a basketball court at Blantyre Secondary School, Malawi. Mathies went on to become MCC executive director from 1996–2005.
PHOTO courtesy: Ron Mathies

Forty years have passed since former Mennonite Central Committee worker Nancy Heisey first stood in front of a classroom in Zaire, now known as the Democratic Republic of the Congo.

“The students – some were older than I, some had lived through hiding in the bush during the rebellions, some were already strong in English because they wanted so much to learn it, some loved correcting my French and some heckled me from the back row,” wrote Heisey in a short recollection of her three years as a participant of MCC’s Teachers Abroad Program (TAP) from 1973–76.

Heisey, now a professor in Eastern Mennonite University’s Bible and religion department, was one of more than 1,000 TAP participants who taught in 10 African countries, Jamaica and Bolivia from 1962 to the mid-1980s. Many have memories, scrapbooks, photos and letters to share from that time.

Heisey said she learned “to flex, to laugh and to be firm” as she matured alongside her Zairian students. “I read their assignments that retold stories they heard at home, watched their faces glowing as they sang and inhaled the energy they poured into acting out sketches.”

To preserve stories about TAP, MCC invites all TAP participants to contribute letters and reports that were sent home, photos and artifacts from their experiences to MCC’s newly established memory bank. All submissions will become property of MCC.

This centralized collection of information about TAP will be available to the public once it is collated.

“Our letters and reports home to family, friends and church communities now provide fascinating glimpses into the new contexts we were encountering and thus provide not only rich personal memories but also primary historical documentation,” said Mathies, who lives in Waterloo, Ont.

For guidelines on how to submit, contact your country’s MCC records director.

—Emily Will is a freelance writer from Akron, Pa.