What's New
Delete or not to delete, that is the...
Believers bring water for drought baptism
Encouragement to those in the arena
Keeping attention and making an impact: A few...
Open hands to reconciliation
From the editor
Approaching truth and reconciliation with love in our...
MB Seminary offers new MA in Transformational Leadership...
Multiply August Ukraine Updates
Book Review of Return Stroke: Essays & Memoir...
Home News MCC supports Light and Hope for Syrians 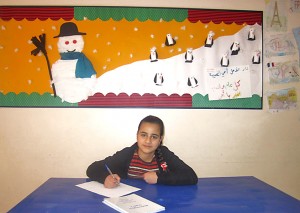 Damaris, a 13-year-old Syrian refugee, still waits for her father to come home.

More than five months ago, she quit school when fighting between government and opposition forces began in her family’s Aleppo neighbourhood. She and her family hid in the basement as the bombs fell. One day her father, a builder, went out to get some bread and never came home.

“To this day, we have no news of him,” says Damaris, who fled to Lebanon with her mother, aunt, grandfather and four siblings. Her family survives on the money her mom and aunt make as seamstresses.

“We can hardly afford to pay the rent for the room we live in together,” she says. “We pray daily for our dad to come back.”

In the midst of these hard times, Damaris found a safe place at the House of Light and Hope centre, where 120 refugee girls affected by the Syrian crisis get support to deal with the trauma they experienced and the difficult circumstances in which they live.

The centre is located in Nabaa, a very poor neighbourhood in the Beirut suburbs, where many Syrian and Iraqi refugees settled. Damaris and her family are part of an influx of 30,000 refugees that cross from Syria to Lebanon each week, according to the United Nations High Commissioner for Refugees.

As rent and food prices increase and concerns about water supply and refugee status grow, girls are more at risk because families sometimes cope by forcing girls to beg, become sex workers or marry young, says Naomi Enns, a member of River East MB Church, Winnipeg, who serves as MCC representative for Lebanon and Syria.

The majority of the children at House of Light and Hope have partially or totally missed their school year. There is little room in the Lebanese public school, which also uses a very different curriculum than Syria.

“MCC is helping to offer at least these 120 children the right to smile and learn in peace and security,” says Enns. “And we pray that the violence will stop. Most of these children simply miss their homes in Syria and the life they once had.”

Since the Syrian crisis began in March 2011, MCC has allocated $16 million in emergency food, shelter, household items, trauma healing and education support as well as peacebuilding and disaster response training in Syria, Jordan and Lebanon.

Laurie Robinson is a freelance writer from North Newton, Kan.