What's New
How sweet the sound
One MCC Thrift Store Began With a Few...
A Hunger for Conversation
Getting the mental and emotional rest you need...
The Patience of God
2023 Spirit of MDS Fund accepting grant applications
October 2022 update from the CCMBC Executive Board
Arnold Community Church hosts block party to thank...
When Spring returns
An autumn reset
Home Arts & Culture Theatre tour preaches gospel of reconciliation 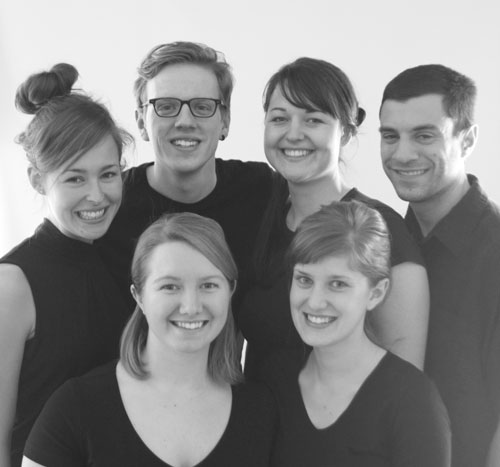 That’s the message Mennonite Central Committee and Theatre of the Beat will bring to audiences from Kitchener, Ont., to Abbotsford, B.C., over seven weeks this spring, through collaboration on Theatre of the Beat’s new production Forgiven/Forgotten.

The Ontario performance group explores contemporary issues through drama followed by a question-and-answer period “to get audience thinking and processing the content of the play.” Their stories never have a happy or tidy ending because “if a play ends badly, people talk about it afterward,” says director Johnny Wideman. “It empowers the audience to want to become involved in whatever issue we’re tackling.” 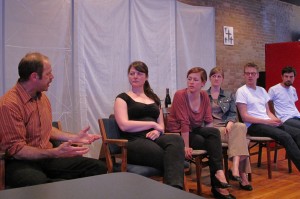 Cast talk back with MCC Manitoba’s Steve Plenert at One88 (Eastview downtown campus), May 9.

“I’ve always had a heart for people on the outside, the disenfranchised,” says Wideman. When news media brought attention to changes in the justice system about a year ago, he approached MCC Ontario (with whom TotB had collaborated previously) about partnering on a production about restorative justice and the community’s responsibility.

Formed by the Anabaptist-Mennonite faith tradition, Wideman currently supplements his theatre work serving as peace education coordinator at Willowgrove camp where he works with concepts of restorative discipline and restorative justice in curriculum. His research for the play included visiting a Circles of Support and Accountability group with MCC Onario restorative justice coordinator Eileen Henderson.

Forgiven/forgotten “doesn’t focus on the mediation process; it focuses on community’s role in welcoming offenders, in addressing hurt and working toward healing – looking from church perspective,” Wideman says. “When something happens, what’s society’s responsibility?” 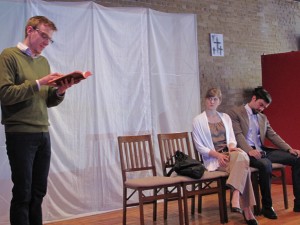 “Forgiven/Forgotten is about regular church people,” says Siemens. The story of how the community is affected when a husband and father is paroled in their midst “is something most of our constituency could identify with,” he says. “At times, you see yourself cheering on the protagonist; other times you think, ‘You’re selling out – doesn’t relationship go past that?’

“MCC sensed Theatre of the Beat’s eagerness,” says Siemens (who coordinated an MCC Saskatchewan restorative justice drama tour with Bethany College in 2010), so they expanded the production’s scope from Ontario to cross Canada. 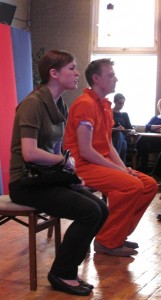 Theatre of the Beat “hopes to challenge and inspire” through their productions, which have included Gadfly (about a draft dodger) and Commemorate (about the War of 1812). All six members of Wideman’s troupe both act and do behind-the-scenes work from booking to costume design. They attend Mennonite churches, and work or study in peace and justice or community development-related fields.

Performance locations on the tour will include churches and theatre venues. “We try to exist in the secular theatre world as well as in the church world – like a Venn diagram,” says Wideman. “We want to challenge and be a part of both communities.”

“The Beatitudes fuel why we believe in peace, that caring for one another is important,” says Wideman. TotB practises community and sustainability on tour: the troupe and their gear travel together in one van, and they overnight in homes. “We might be sleeping on couches, but we’re getting to eat with families at dinner tables.” 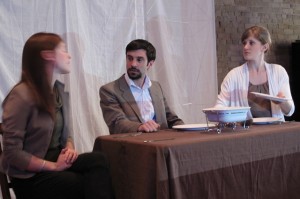 Updates and performance information are posted at forgivenforgotten.wordpress.com.