What's New
A matter of love: Reframing abortion
“Any chance you might be expecting a goldfish?”
Abortion, the image of God, and faithful witness...
Choosing motherhood: The sacrifice of honouring life
MWC Assembly small but full of joy
Bad back doesn’t hold back MDS volunteer
Transition in CCMBC National Faith and Life Leadership
Leading through the trauma of covid: Part three...
The church distracted: When the main thing is...
Remote wilderness rescue turns into service with MDS...
Home News MCC sets new target for Syria crisis campaign 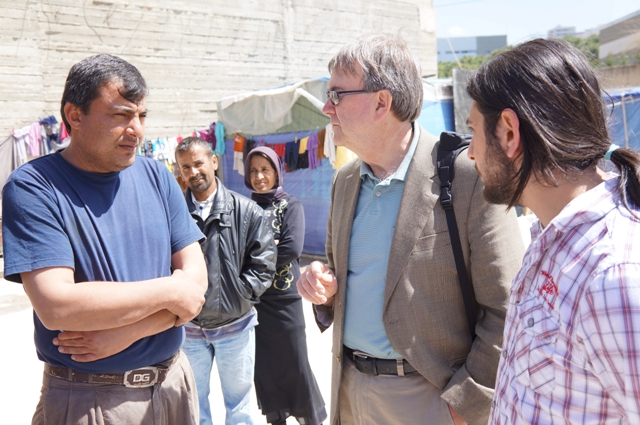 (From left in foreground) Walid Dabbous, a Syrian refugee now living in Sidon, Lebanon; Don Peters, executive director of MCC Canada; Ali Jammoul, a worker with DPNA (Development for People and Nature Association). MCC is working with DPNA on conflict prevention and recreation activities for children in refugee settlements in Lebanon. MCC has also provided DPNA with material resources such as food, blankets, relief and education kits.
MCC photo by Sarah Adams

The executive director of Mennonite Central Committee Canada says the situation in Syria is likely to worsen and more must be done for the people affected by the conflict.

Don Peters recently visited Lebanon, where up to one million Syrian refugees are living. He says they are in desperate need of shelter, food and medical assistance.

MCC began its Syria crisis campaign last year with an initial goal of $500,000. The total has now surpassed $1 million. Peters is calling on MCC supporters, and all Canadians, to help MCC meet the new goal of $1.5 million.

“There is much, much more work to be done. This is an ongoing disaster. The United Nations agencies haven’t yet kicked in with the amount of assistance that these people need. And other agencies, such as MCC, are going to have to continue their support.”

To date, MCC has dedicated more than $4 million to programs in Syria, Lebanon, and Jordan. That includes cash contributions, as well as material resources such as blankets, relief kits, clothing, and footwear.

While the bulk of MCC’s work has been in humanitarian assistance, Peters says MCC is also assisting in other ways. It’s providing training for partner agencies who work with displaced Syrians, both inside and outside the country.

MCC is also supporting peacebuilding programs, some with a special focus on trauma recovery.

Peters says his trip gave him a new appreciation of the value of these programs. He had a unique opportunity to meet with church leaders and other partners from Syria, who were able to travel to Lebanon for a few days. Peters says they are courageous people, working in risky and difficult conditions.

“What really struck me was that maybe half of the people we met were themselves displaced from their homes. And yet they are still caregivers for others. They said this is our situation now and this is what we need to do. Their dignity and poise is remarkable.”

Peters asks that Canadians remember the people of Syria and those who are helping them, in their prayers.

Such prayerful support is deeply appreciated. In a note to MCC, Patriarch Zakka of the Syrian Orthodox Church writes:

“We are glad to know about your love and affection towards us. We remind you of the words of the blessed apostle Saint Paul that “He who supplies seed to the sower and bread for food will supply and multiply your resources and increase the harvest of your righteousness. You will be enriched in every way for great generosity, which through us will produce thanksgivings to God.” (2 Corinthians 9:10–11) We extend our apostolic blessings to you. May the grace of God be with you all.”

It’s estimated that more than 70,000 people have died in the ongoing conflict. More than three million are displaced, either within Syria or to neighbouring countries.