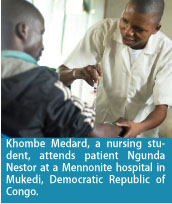 Most of the hospitals were constructed with the support of North American missionaries in the mid-20th century. Since then, missionaries have largely withdrawn from the country, and Congo’s economy declined severely due to political turmoil and devastating wars. Nationwide health statistics tell a grim story — nearly 1 in 6 Congolese children dies before age 5, often from preventable and treatable diseases such as malaria and diarrhea.

MCC is seeking to raise roughly $690,000 Cdn to provide medications and other supplies to Mennonite and MB hospitals in southwestern Congo. The hospitals sell the medications at a discount and use the proceeds to buy more medications and pay for other needs, such as nurses’ salaries, which can be less than $10 per month.

As of June 2009, hospitals in Mukedi and Kajiji received 4 deliveries of medications and supplies, such as antibiotics, malaria medicine, pregnancy tests, scalpels, and chemicals for developing X-rays. Hospitals in Nyanga and Kanzombi are expected to begin placing orders in October.

Medical coordinators from Congo’s Mennonite and MB churches administer the project in consultation with MCC workers John Clarke and Anicka Fast from Montreal.

In Kajiji, the proceeds from Menno-Santé have allowed the hospital staff to receive a modest pay increase, keeping nurses from immigrating to neighbouring Angola to look for work. Hospital staff in Mukedi and elsewhere hope Menno-Santé will allow them to provide care to a greater number of patients who currently cannot afford treatment.

“The number of [hospital] beds actually filled at a certain time hovers around 12–20 percent,” Fast says. “If people could afford it, they would all be full.”