What's New
Delete or not to delete, that is the...
Believers bring water for drought baptism
Encouragement to those in the arena
Keeping attention and making an impact: A few...
Open hands to reconciliation
From the editor
Approaching truth and reconciliation with love in our...
MB Seminary offers new MA in Transformational Leadership...
Multiply August Ukraine Updates
Book Review of Return Stroke: Essays & Memoir...
Home News MCC in Iraq

MCC reaches out to Iraqis displaced by armed conflict 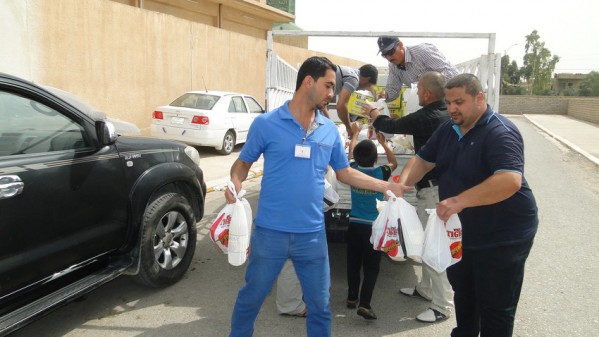 On June 12, Mohamed Abu Jasem, left, Hussam Abdullah and other volunteers with MCC Iraq partner Al Amal loaded a truck in Bashiqa with food and water to be distributed there and in other villages in Nineveh Province. (Photo courtesy of Yazidi Solidarity Association)

As armed conflict forces Iraqis from their homes, Mennonite Central Committee (MCC) is providing vital items for daily life and is planning with partner organizations for an ongoing response.

After the Islamic State of Iraq and the Levant (ISIS) took over the city of Mosul June 11, 2014, more than 300,000 residents fled into nearby villages and the Kurdish area of Iraq. The United Nations estimates there are 1.9 million internally displaced persons (IDPs) in Iraq.

One MCC partner, Al Amal (The Hope), which has ongoing peacebuilding and community improvement projects near Mosul, already is providing food and water to IDPs, supported by MCC funds. Water and electricity are cut off in many of the villages, making coping difficult for both the IDPs and the host families that welcomed them.

Deborah and James Fines, MCC workers in Iraq, are in Erbil, about 95 kilometres east of Mosul. Their work continues, which now includes planning MCC’s emergency response with partner organizations in Nineveh Province, where Mosul is located.

People can help Iraqis through MCC by meeting critical needs for relief kits and hygiene kits, and financially supporting the response and MCC’s ongoing work in Iraq.

Gifts of money are also needed to support MCC’s efforts with partners in Iraq to quickly meet basic needs and to continue to invest in long-term solutions that build peace.

Gordon Epp-Fransen, an MCC representative for Iraq, Iran and Jordan, notes that while the U.S. military appears to be renewing engagement in Iraq, MCC already is there and actively meeting the needs of people displaced by conflict both in Iraq and in nearby countries.

“The same day that President Obama announced the introduction of 300 military personnel into Iraq, five teachers from the U.S. and Canada flew into Iraq to serve with MCC’s short-term Intensive English Program, one of the ways we support Iraqi Christians, many of whom have been displaced or traumatized by earlier conflicts. We will continue to work with long-term partners to determine how MCC can be of immediate assistance to the thousands of recently displaced persons.”