What's New
“I’m Sorry” : Pope Francis addresses a “deplorable...
A matter of love: Reframing abortion
“Any chance you might be expecting a goldfish?”
Abortion, the image of God, and faithful witness...
Choosing motherhood: The sacrifice of honouring life
MWC Assembly small but full of joy
Bad back doesn’t hold back MDS volunteer
Transition in CCMBC National Faith and Life Leadership
Leading through the trauma of covid: Part three...
The church distracted: When the main thing is...
Home News MCC projects bring assistance during Ramadan 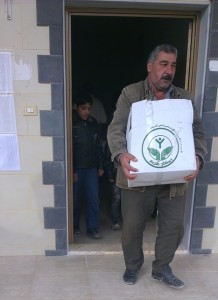 Ahmad Yousef is the father of 8 children, originally from a village called Koseir, near Homs, Syria. He was displaced and relocated to the village of Humaira, where he received this food package. Photo provided by Forum for Development, Culture and Dialogue.

Ramadan was in July this year, and Muslims around the world fasted during daylight hours to mark their holy month. Two Mennonite Central Committee (MCC) projects helped to make this time a little easier for families in need of relief, displaced by the conflict in Syria.

In Syria, an MCC emergency food program in the Qalamoun area has been extended for another six months. Five thousand families will receive monthly baskets of food, purchased locally with MCC funds. The baskets contain staples such as: rice, oil, sugar, canned meat, and tea.

Providing food relief during Ramadan brings comfort and helps put people at ease. “It enables them to fast without worrying too much if they have food or not,” says Riad Jarjour, President of the Forum for Development, Culture and Dialogue, an MCC partner in Lebanon. “They can focus instead on practicing their religious beliefs in the holy month.”

There are more than 13,000 families seeking food assistance in Qalamoun, and the numbers continue to rise as people are displaced by violence in other regions. Meanwhile, access to food in Syria is becoming more difficult due to rising prices and food shortages.

“Such distribution helps the internally displaced people not only to survive, but to live in dignity, not begging, not dying of hunger, nor fighting with each other over a loaf of bread,” says Jarjour.

In Southern Lebanon, a new program will provide food vouchers for 2,625 Syrian and Palestinian families displaced from Syria.

For a period of six months, families will be given vouchers that can be used to redeem food from local stores. Using vouchers instead of direct assistance reduces administrative costs, increases the diversity of foods people can eat, and benefits the local economy. Vouchers also help return a sense of control and dignity to people living with uncertainty.

“The simple gesture of entering a store and choosing foods that one knows will keep their families healthy and happy offers refugees an important sense of self-worth,” says Sarah Adams, MCC country representative for Lebanon and Syria.

Alongside food vouchers, the project will provide supplementary food for 450 babies between six months and one year old. Families will receive porridge made of wheat cereal, mixed with vegetables and fruit, to help prevent malnutrition in young children.

MCC is also helping improve food sanitation by providing a one-time distribution of cooking utensils. Many families left home so quickly they were unable to bring supplies with them.

Both projects are funded through MCC’s account at the Canadian Foodgrains Bank.

To date, MCC has allocated $8.2 million for humanitarian assistance, peacebuilding, and disaster response to assist people affected by the crisis in Syria.