What's New
Through the conflict, life carries on in Ukraine
A FOCUS on Mission
Must Patience Be So Slow?
Harold Jantz: A Heart for the Mennonite Story
Lorlie Barkman: A Life of Creative Engagement
Last Days, First Days
Women in Ministry: Bertha Dyck
January Moment in Prayer “Holy Spirit—Fill Us!”
The Church as the Patient Body of Christ
Advent: Making Much of Jesus: Christmas Day
Home News MCC partners assist survivors of flooding in North Korea 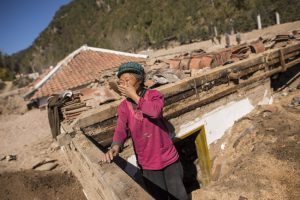 Bong-Suk Shin, 65, from Yonsa County, looks through what remains of her home for anything she can salvage. She and her grandson lost all their personal belongings when flooding and landslides ravaged the region. (MCC Photo/John Lehmann)

MCC’s partners in Democratic People’s Republic of Korea (DPRK), also known as North Korea, are working to provide relief assistance for the hundreds of thousands of people affected by flooding and landslides in the isolated country.

From Aug. 28, 2016, to Sept. 2, 2016, heavy rains caused by Typhoon Lionrock pounded the northeast part of DPRK, causing flooding and landslides in six counties of Hamgyong province. According to the United Nations, 138 people were killed, more than 100,000 were originally displaced and 600,000 people are in need of assistance.

In the mid-1990s, citizens of DPRK suffered from serious flooding which destroyed crops and large tracts of farmland, contributing to a widespread famine. Regular flooding since then exacerbated the problem. 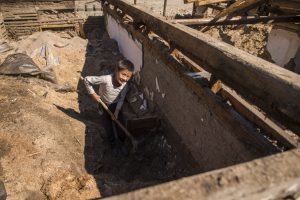 Kum-Hyok Kim, 11, helps his grandmother, Bong-Suk Shin, 65, whom he lives with, look through the rubble of their home for anything they can salvage. It was destroyed in flooding due to Typhoon Lionrock. (MCC Photo/John Lehmann)

MCC’s partnerships in the country meant hundreds of people received relief kits and food shortly after the flooding took place.

But the need is still immense, especially because temperatures recently started dipping below zero at night.

One of MCC’s partners in the region, the Canadian organization First Steps, visited the affected areas along the Chinese-DPRK border to survey the damage and deliver relief assistance.

In Yonsa County, Bong-Suk Shin, 65, and her grandson Kum-Hyok Kim, 11, dug through the ruins of their home, looking for any possessions they could salvage.

“Everything turned into a sea for three days,” Shin recalled. 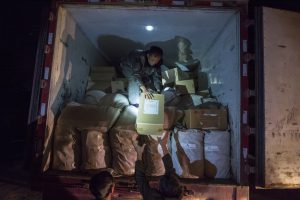 Shin and Kim lost all their personal keepsakes and household belongings, including kimchi pots used to store the staple winter food. In their county alone, 81 are dead or missing and of a population of approximately 40,000 people, 27,308 are homeless.

Susan Ritchie, the executive director of First Steps, was part of the group who went to visit the region. She was startled by the immensity of the damage.

“When First Steps went to visit in October, we travelled in a big circle, driving for a full day and most of the night. In that journey, all we saw was devastation,” she explained. 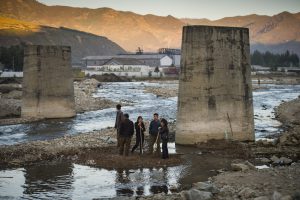 In Musan County, a group of workers stand beside one of the region’s many destroyed bridges. (MCC Photo/John Lehmann)

Many homes, schools, clinics, bridges, roads and rail lines were damaged or destroyed in the region. But among this devastation, Ritchie saw signs of hope.

“Everywhere we went we saw people who were affected by the flood as well as people who had been mobilized from all over the country to work to rebuild their homes,” Ritchie said.

“There were people of all ages gathering stones, which I assume will be used in construction. People are working hard to try to get their lives back on track.”

In September, MCC’s partner, the U.S. organization Christian Friends of Korea (CFK), distributed 500 MCC relief kits and 110 school kits to respond to the flooding in Musan and Yonsa counties.

In addition, MCC, through First Steps, will purchase 6,060 square meters of corrugated steel roofing for rebuilding damaged daycares, kindergartens and clinics in Yonsa. Approximately 4,200 children will benefit from this project. “Thanks to MCC, children in Yonsa will have a safe place to study and play where they will be shielded from the cold, allowing more family members to focus on rebuilding the community,” Ritchie said. “Patients will be able to take refuge from the cold as they seek medical attention.”

—Rachel Bergen is a staff writer for MCC Canada.