What's New
Delete or not to delete, that is the...
Believers bring water for drought baptism
Encouragement to those in the arena
Keeping attention and making an impact: A few...
Open hands to reconciliation
From the editor
Approaching truth and reconciliation with love in our...
MB Seminary offers new MA in Transformational Leadership...
Multiply August Ukraine Updates
Book Review of Return Stroke: Essays & Memoir...
Home News MCC Canada sponsors refugees from Syria 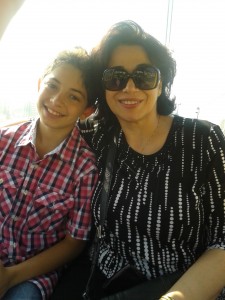 Hanan Talabeh, right, is sponsoring her nephew, his two siblings and mother to come to Canada as refugees, fleeing the violence in Syria.
Photo courtesy of Hanan Talabeh

All Hanan Talabeh can do for her family in Syria is wait. Wait at home in Ottawa while the Canadian government processes her family’s refugee application. Wait, and hope that her sister-in-law and her three children are approved faster than the 18 months applicants are told to expect.

Talabeh’s family is fleeing the ongoing violence in Syria. Earlier this year, they left their home in Damascus to seek refuge in what they thought would be a safer neighbourhood in the same city. When that too became unsafe, Talabeh’s brother tried to return to the family home and retrieve some of their belongings so they could move to Lebanon. On the way he was shot by a sniper and died.

After her brother was killed, Talabeh worried about the rest of the family, “The kids were devastated,” she says; “staying in Syria, hearing all the bombing all the time after all what they had been through, it was tough.”

That’s when Talabeh started looking for ways to bring her family to Canada. Through a web search, she found Mennonite Central Committee (MCC) Ontario and made contact with Moses Moini, the refugee program coordinator. In July, when the government announced plans to resettle refugees from Syria, Moini began working with Talabeh to bring her family to Ottawa.

Normally MCC does not sponsor refugees directly, preferring to work through churches and other groups. But with no congregation available, MCC entered a direct partnership with Talabeh and sponsored her sister-in-law with her children, ages 12, 13 and 15.

“This case of a widowed woman with children in that age range is something that just pulls out one’s own heart,” Moini says. “Here you are all in a new land in a completely different culture with basically nobody to support you.”

The family’s application has been submitted: after approval by the federal government, the file will be sent to the visa office in Lebanon which will interview the family and determine eligibility. In the meantime, their case has been registered by the United Nations refugee organization in Lebanon.

While they wait, Talabeh’s family is living with family friends in an apartment in Saida, Lebanon. Talabeh and her mother went to visit in June to make sure the family is doing okay. Now they talk by phone at least twice a week.

Though the waiting process is long, Talabeh now has reason to believe her family will find safety in Canada. “I would love to thank Moses for his help. At least I have hope now that one day I will have them close by.”