What's New
A matter of love: Reframing abortion
“Any chance you might be expecting a goldfish?”
Abortion, the image of God, and faithful witness...
Choosing motherhood: The sacrifice of honouring life
MWC Assembly small but full of joy
Bad back doesn’t hold back MDS volunteer
Transition in CCMBC National Faith and Life Leadership
Leading through the trauma of covid: Part three...
The church distracted: When the main thing is...
Remote wilderness rescue turns into service with MDS...
Home News MCC B.C. annual general meeting 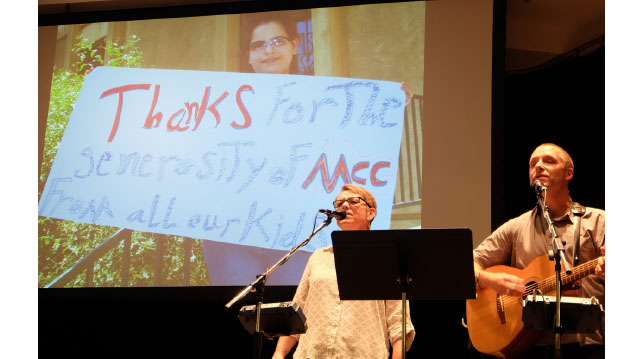 Kim Thiessen and Darryl Neustaedter Barg, pictured in performance at the 2014 annual general meeting of MCC B.C., communicate hope through music. They have collaborated since 2001 to raise awareness and funding toward MCC’s HIV/AIDS work, raising more than $800,000 for MCC’s Generations Program. Their fifth album is Even in the Smallest Places. Photos: Sophie Tiessen-eigbike

“The world is full of people who live such desperate 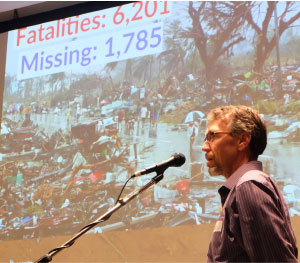 lives,” said Janzen, the featured speaker. Director of donor relations Gerd Bartel told delegates there are now 50 million refugees in the world, the largest number since World War II. “MCC is there to help in those small places,” said Janzen, “and we can give many a sense of hope. And their faith becomes bigger.”

Janzen said MCC provides funds for Kenyans to build sand dams, which can provide water for up to 1,100 families. “This is like an MCC relief sale,” he said; “It shouldn’t work. Far too many people!” An average dam costs about $15,000 for materials.

“Our volunteers are the backbone of what we do,” MCC B.C. director Wayne Bremner said. “We have about 3,000 volunteers in B.C., plus others we don’t know of.”

Bremner hopes to see the new MCC B.C. centre in use by this fall, “while across the street [in Abbotsford] there are still problems in the homeless community.”

The Abbotsford Chamber of Commerce has recognized MCC B.C. as non-profit organization of the year, an honour, Bremner said, “that belongs to thousands of volunteers, staff and donors.”