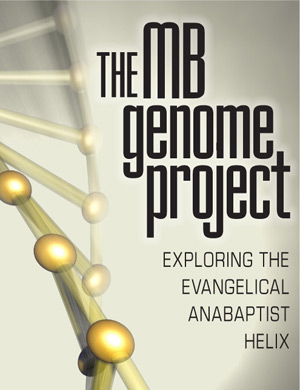 Imagine the Mennonite Brethren denomination as the adult daughter (“MB”) of two parents: “Anabaptist” and “evangelical.” The daughter sometimes recalls her parents’ marriage as one long-running conflict.

Growing up, the often sensitive and insecure MB child felt caught in the middle of her parents’ conflicts, so she tried different strategies to feel accepted. Sometimes, she would take one parent’s side against the other; she would identify with either Anabaptist or evangelical, as if the other parent didn’t matter.
As a result, the MB child struggled to grow into a content and influential adult.

Now picture a different scenario. Imagine the MB daughter recalling her parents’ marriage as a match made in heaven. She even traced her parents’ family trees back six centuries, and discovered that she and all her Believers Church cousins share a common ancestor named the Radical Reformation!

The MB daughter acknowledges her parents’ disagreements – some long-lasting (as in every marriage) – but she knows she has an important place in the world because she’s a unique creation. Her DNA – that one-of-a-kind genetic contribution from both parents – shapes her particular temperament, aptitudes, skills, and beauty. All these qualities help her incarnate a little of God in the world.

Since the 1970s, Canadian Mennonite Brethren have described our denomination as “evangelical Anabaptist.” Sometimes we’ve felt caught in an unresolvable tension between these two influences, as if suspended between two north poles. Some responses to this tension have been as dishonest as denying our parentage.

A healthier response is for us to embrace both strands of our DNA, and then explore how this unique double helix can help us fulfill our calling within God’s mission for the world.

In order to understand the genetic qualities of the MB daughter, we must meet her parents. Anabaptist was born to Swiss and German parents in the sixteenth century. The Swiss grandparent’s faith tended toward black and white thinking, and emphasized separation from its Reformed and Catholic ancestors. The German grandparent’s faith was more mystical and apocalyptic. Early in life, the Anabaptist youngster’s extremes were moderated by Dutch teacher Menno Simons.

The Anabaptist adult (she changed her name to Mennonite in Menno’s honour) became known for repentance and separation from temptation and “the world;” for yielded abandonment to God; for salvation that results from cooperating with God’s Spirit; for an inward experience of salvation’s new birth; for obeying Christ as part of his church (including believers baptism, community discipline, sharing goods, reading and interpreting Scripture together); for depending on Scripture in all of life; for joining God’s mission for the world; and for suffering without responding violently.

The MB child’s evangelical parent was born in the Protestant world of revivals and awakenings during the 18th and 19th centuries. Evangelical’s parents were Pietist and Puritan. Both were consumed with the spiritual renewal of individuals and the church. The faith of the Pietist grandparent tended to be individualistic, experiential, and pragmatic (this grandparent was often Arminian). The Puritan grandparent tended to express faith in active public life, and in precise theological statements (this grandparent was often Reformed or Calvinistic).

In time, Pietist and Puritan’s evangelical offspring became known for four traits: conversionism (people’s lives need to be changed), biblicism (Scripture is authoritative for believers), crucicentrism (Christ’s sacrifice on the cross is central), and activism (the gospel is expressed through human efforts of evangelism and works of mercy). Today the evangelical parent feels torn between extending generosity to all Christians who share a common centre (a Pietist impulse) and reinforcing precise doctrinal boundaries (a Puritan impulse).

Now consider six qualities of the adult MB daughter, the offspring of both Anabaptist and evangelical.

1. The adult MB studies the Bible and seeks the Holy Spirit’s illumination.

It’s easy to see the likeness of both Anabaptist and evangelical in the Mennonite Brethren denomination’s repeated appeal to Scripture for all matters of faith and life.

At the same time, the MB has inherited from both parents an expectation that the Holy Spirit will bring those Scriptures to life, showing believers how to interpret and apply them. In 1950, the Board of Reference and Council for Mennonite Brethren wrote that the best understandings of Scripture come about when believers together as a “conference” are led by the Holy Spirit.

Mennonite Brethren have consistently been committed to in-depth Bible study, and have generally utilized scriptural images and vocabulary to express their theological convictions. They have preferred the biblical exegesis of theology more than the synthesis or philosophy of theology (even though this has left Mennonite Brethren open to the risk of being anti-intellectual or of failing to make their theology explicit.)

In 1981, David Ewert presented a resolution on women in church ministries. For this resolution – addressing an issue Christians still disagree about – Ewert modelled an approach that was both biblical and reliant on the Holy Spirit. He recommended the resolution because it was based on careful study of Scripture according to the light the Holy Spirit had given; but Ewert added that this particular resolution might not be the last word because “we are always open to receiving more light.”

2. The adult MB experiences the Holy Spirit and lives out her faith in daily life.

John Wesley was an Anglican preacher influenced by Moravian Pietists. On May 24, 1738, he experienced the Spirit; he felt his heart “strangely warmed” when he received the assurance that Christ had taken away his sins and saved him. In the 1850s, the Lutheran preacher Eduard Wuest brought to Russian Mennonites the Pietist teaching that all Christians can experience confirmation their sins are forgiven – that they have been justified by God. This teaching was at odds with those Mennonites who believed people must simply persist in obedience to Jesus, hoping to be saved when they die.

The early Mennonite Brethren embraced Wuest’s teaching on assurance of salvation, but also held the Anabaptist emphasis that a believer must live according to Jesus’ teachings.

On the one hand, conversion is not simply a one-time experience, but must result in ongoing discipleship. (Sadly, Mennonite Brethren have sometimes been arrogant toward Mennonites and others who haven’t had an emotionally rich conversion experience.)

On the other hand, the Anabaptist vision of discipleship is impoverished when divorced from an intimate, personal life with the Holy Spirit. In the 20th century, Mennonite Brethren have been influenced by the charismatic movement, yet have also critiqued its excesses; this dual response points to MB’s desire for experiences of the Spirit that are linked to lifelong practical discipleship.

3. The adult MB cherishes not only the sacrificial substitutionary work of Christ on the cross but also all the other aspects of Jesus’s life, death, and resurrection.

Both parents have given the adult MB her core conviction that Christ died for the sins of the world. The MB believes that Christ’s atonement (which means reconciliation) at the cross is crucial for salvation.

However, as her first three confessions of faith stated, the MB believes that justification was also achieved by Jesus’ resurrection (Romans 4:25). Christians aren’t simply declared righteous by Jesus’ sacrifice on the cross. They are also made righteous and empowered to live righteously by the risen Jesus whose Spirit works in them. The MB is not only crucicentric but also Christocentric because salvation comes through the life, death, and resurrection of Jesus Christ.

4. The adult MB strives to live uprightly and depends entirely on God’s grace.

Simons taught that true faith is always displayed by good works. The MB’s Anabaptist parent acknowledges that an active human response to God’s grace is necessary for salvation to take effect. In this conviction, the MB adult is more like her Catholic grandparents than her Protestant grandparents. As Dallas Willard writes, “Grace is not opposed to effort. It is opposed to earning.”

At the same time, this emphasis on discipleship has often made the MB adult preoccupied with behavioural expectations – as if salvation could be earned. Mennonite Brethren have repeatedly needed to correct this tendency because salvation is first and foremost a gift of God. In 1969, Mennonite Brethren officially agreed that future resolutions on lifestyle issues would no longer be presented as rules for membership but as ideals and guidelines.

It sometimes seems that churches with a strong sense of sharing life together neglect their gospel mission, while churches that are vigorously evangelistic demonstrate an individualistic rather than communal ethos. In the 1950s, when most Mennonite Brethren were immigrants in North America, many tried to maintain their Christian unity through ethnic customs and German language.

The MB adult inherited her missional impulse from both parents. In the 16th century, informal evangelism was prominent among Anabaptists. In the 1860s, German Baptists helped Mennonite Brethren develop mission societies.

In the 1970s and 80s, when Mennonite Brethren were joining other evangelicals in denouncing societal evils such as divorce, Willingdon Church in Burnaby, B.C., created a ministry that offered a caring community for divorced adults, while continuing to be strongly evangelistic.

Today, Canadian Mennonite Brethren churches demonstrate that living as Jesus’ community is doing God’s mission. They communicate the gospel of Jesus by getting acquainted with local First Nations reserves; by offering soccer, supper, and the gospel to Mexican migrant workers; and by becoming intentionally intercultural (not merely multicultural).

6. The adult MB welcomes diversity within her denomination and honours its unique convictions and contributions.

For 150 years, Mennonite Brethren have learned from other believers: Christians who wrote the earliest creeds, Lutheran Pietists, German Baptists, dispensationalists, charismatics, Church Growth experts, the Vineyard. Although, in many of these engagements, the Anabaptist strand of the MB heritage has moderated or even redirected that learning.

As the MB adult takes her place among many other Christian denominations, she recognizes that each denomination’s qualities make a valuable contribution to the body of Christ in the world – as do her own unique MB qualities. She therefore pursues the unity of Christ’s body by collaborating with diverse Christian groups.

When a child is conceived, some of each parent’s genetic contribution is lost. This has also happened in the unique evangelical Anabaptist DNA of the adult MB. For instance, the Anabaptist qualities of simplicity, willingness to suffer, and living at the margins of society are rarely seen among Mennonite Brethren in Canada. Losses that depart from the way of Christ can be reintroduced through biblical teaching and the Holy Spirit’s genetic engineering.

Every denomination, like every person, inherits limitations and blind spots. The MB daughter cannot reflect the image of Christ by herself. Fellowship with other denominations is essential for the healthy functioning and witness of the undivided body of Christ.

There may still be potential gifts within the young adult MB’s DNA that will only be expressed as she continues to mature. For instance, I wonder whether she is learning to express the biblical truth that peacemaking is central to Christ’s atoning work on the cross – peace with God, within the human heart, between enemies, and with all creation.

When people celebrate their identity, they aren’t hindered in their mission, but propelled. The same is true for the adult MB child. Together with all God’s children everywhere and every-when, the MB seeks to faithfully follow Jesus’ life, teaching, and example.

Mennonite Brethren can have confident hope when we live according to our evangelical Anabaptist genome because the One who began a good work in the MB child will go on completing it until the Day of Jesus Christ.

–After serving as an MB pastor for 15 years, Andrew Dyck now works part-time as executive secretary of the binational MB Historical Commission. He is also writing a doctoral dissertation on MB spirituality. He and his wife Martha live in Abbotsford, B.C.

For Everything a Season: Mennonite Brethren in North America, 1874–2002 edited by Paul Toews and Kevin Enns-Rempel