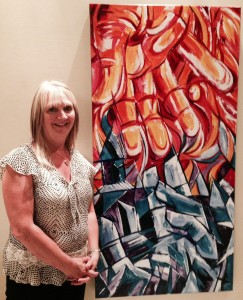 Persecution. Not a popular word; however, it’s a reality in countries like Iraq and Sudan. Raised up in the Mennonite Brethren church tradition, artist Faye Hall knows the denomination is no stranger to persecution. One story in particular inspires Hall and others to “love your enemies, pray for those who persecute you” (Matthew 5:44 NLT).

Dirk Willems, a Dutch Anabaptist martyr, was arrested for his faith but escaped from prison. Seeing him flee, a guard followed Willems onto the thin ice of a pond and fell through the ice. Willems didn’t ignore the cries for help but acted on his beliefs and rescued the guard – only to be re-arrested and burned at the stake May 16, 1569, outside the town of Asperen. The Martyrs’ Mirror contains a widely-known etching of the rescue.

This story of steadfastness, faithfulness and love for the enemy inspired Hall, a passionate follower of Jesus and member at North Kildonan MB Church, Winnipeg, to paint “Fire & Ice,” an interpretation of Willems’ story.

The painting depicts two hands reaching toward each other, hands of “fire” and “ice”: opposing beliefs, two extremes, still trying to touch. “The fire of course, represents the man who reached out the hand of rescue and then was burned at the stake. The icy blue section is the hand of the man who was rescued, yet was still ‘cold’ enough to turn in his rescuer to be executed,” says Hall.

A closer look at the painting reveals details such as a church steeple, a person mourning, a person being burned at a stake.

“The painting ties in Dirk Willems’ story, my background, human rights and all the persecution and murders of Christians that are going on right now,” says Hall.

Faye Hall’s goal is to point everyone who encounters her painting to Jesus and the Truth he taught. Her inspiration comes from Scripture, song lyrics, poetry and stories. “And if a painting sells,” Hall laughs, “it’s a bonus.”

Hall submitted “Fire & Ice” to the Manitoba Art Expo’s Human Rights Showcase where it will be displayed Oct. 24-26, 2014. (The human rights theme was chosen in honour of the Canadian Museum for Human Rights opening Sept. 19–21, 2014.)

Hall just finished an exhibit of her paintings at the Mennonite Heritage Centre Gallery in Winnipeg, where her latest project, 32 paintings for a children’s book on the life of Charles Mulli, were displayed.

Meggie Kornelsen has recently extended her love of writing from blogging to crafting stories for the Community News Commons. Meggie is a member at North Kildonan MB Church, Winnipeg.

View a video of Faye Hall explaining her painting here.

Hope on the move: MCC and the migrant...

Seeking truth amidst the world’s rubble of hate