Hope on the move: MCC and the migrant caravan 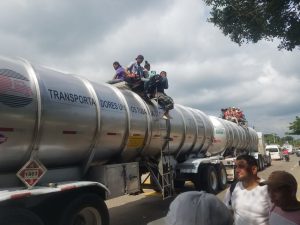 Daniel took this photo as members of the caravan he is with in Mexico climb aboard big trucks that will carry them north for a while. His real name is not being used for his security. Photo courtesy of Daniel

Daniel* doesn’t have just one reason for leaving his 8-year-old daughter and parents in Honduras. He has many reasons for joining a caravan of thousands of migrants walking toward the U.S. border with Mexico.

“I was forced to leave because there weren’t jobs or opportunities, plus the insecurity and violence – it was a little bit of everything,” said Daniel. *His real name is not used for his security.

“The gangs,” Daniel added to the list. “Where I’m from there are gangs, and it’s really pretty dangerous there. That was a factor, too.”

Daniel’s hometown also is threatened by a mining company whose work has poisoned the town’s water, explained Lars Åkerson of Durham, North Carolina, who is the connecting peoples coordinator for Mennonite Central Committee (MCC) in Honduras. Children who bathe in the water get rashes, and vocal residents who have opposed the company now have warrants out for their arrest.

Daniel decided to travel with a caravan because it offers him more security, food and protection than he would have if he were travelling alone. He’s tried to reach the U.S. southern border twice before, but he was detained in Mexico and returned home both times.

He is motivated to keep trying to reach the U.S., he said, not just because of the difficulties where he lives, but by what he is hoping for – to provide financially for his parents and daughter.

According to Aldo Ledón, director of Voces Mesoamericanas (Mesoamerican Voices), an MCC partner in Mexico, Daniel’s situation is one of the better ones.

For many, Ledón said, “It’s not about seeking better conditions. It’s about being able to remain alive. They say, ‘We are going to die at home if we do nothing, so better to die trying.’” 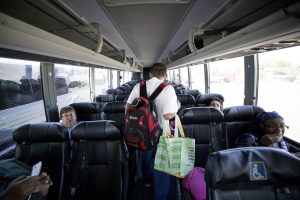 This asylum seeker, unnamed for his protection, takes the bus from Casa Alitas, a respite house in Tucson, Arizona, to his next destination. MCC supports Casa Alitas, and recently gave the organization an additional $20,000 grant to help asylum seekers with transportation costs. Photo/Thomas Nilsson
Extra information, Douglas and son Marvin, whose last names are not being used to protect their identity, look for seats on the Greyhound bus to Florida after having stayed atCasa Alitas, a shelter in Tucson, Arizona, that opens its doors to migrants seeking asylum in the United States. Already processed by Immigration and Customs Enforcement (ICE) agents, the migrants can stay at Casa Alitas for a few days until they figure out the next steps of their journey into the U.S.West Coast Mennonite Central Committee (MCC) has seconded service worker Katherine Smith to Catholic Community Services, which operates Casa Alitas.
Photo/Thomas Nilsson.thomasnilsson@mac.com

MCC partners with many church and community organizations in Central America and Mexico to show compassion to migrants ‒ not just those who are part of caravans, but migrants who have travelled to or returned from the U.S. for many years.

For example, MCC supports Voces Mesoamericanas’ efforts to protect the human rights of migrants, including children and youth, while they are kept in a Mexican detention centre. Voces Mesoamericanas is now coordinating volunteers from San Cristobal, Mexico, to walk with people in caravans.

The volunteers’ presence helps to diminish the chance of violence from authorities or organized crime in the area, Ledón said. People in the caravans also benefit as volunteers listen to them, advise them about safe routes and pay extra attention to those who lag behind.

At Casa del Migrante (House of Migrants), an MCC partner in Guatemala City, Guatemala, MCC contributed blankets and hygiene kits to some people who were part of a recent caravan and to other migrants earlier in 2018. And at the Mexico-U.S. border, other MCC partners offer hospitality and job training for people who choose to stay in Mexico.

Migration is a universal right, said Abby Hershberger, a program assistant at MCC’s United Nations Office, explaining one of the reasons why MCC offers support to migrants. “Freedom to migrate is a right in the Universal Declaration of Human Rights, an international document adopted in 1948. The document outlines the basic inalienable rights and fundamental freedoms to which all human beings are entitled, including asking for asylum.” 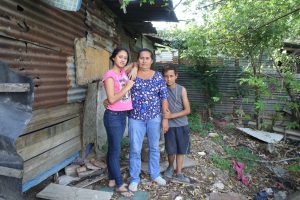 Mara Socorro Pineda (middle) stands with her daughter Evelin Briggith Lopez Pineda 17, and son Herson Alfredo Pineda, 13, at their house. The family left with a migrant caravan in October but were forced by illness to come back home. MCC photo/Jill Steinmetz

That is why most of MCC’s work in Central America is focused on addressing the root causes of violence and poverty that motivate families to flee their home countries.

Together with churches and other organizations, MCC supports educational programs in rural and urban settings that often are combined with peacebuilding initiatives. Agricultural initiatives, vocational training and health and social services support families and communities where they are.

At Comisión de Acción Social Menonita (CASM; Mennonite Social Action Commission), youth migrants who were deported from the U.S. and Mexico get vocational training to help support themselves in Honduras. This MCC partner also works with families in other ways, such as providing human rights training to girls, including María Socorro Pineda’s teenage daughters.

Socorro Pineda, a single mother, and three of her children, ages 17, 15 and 13, left one caravan and returned home when the journey became too long and too difficult. “We intended to keep going through Mexico, but my children were getting sick, and I couldn’t make them continue to climb.”

They came back to their house, located in an informal settlement on the river’s edge outside of San Pedro Sula.

“I saw someone with a two-month-old baby, a 40-day-old baby and one very, very pregnant woman. They (the mothers) were scared about the futures of their children in Honduras, but they have hope and that’s why they decided to join the journey to the U.S.”

Those mothers not only faced a long walk through Mexico, the wait at the southern U.S. border will be long. Saulo Padilla, MCC U.S. immigration education coordinator, said that 2,000 migrants already are waiting to request asylum at official entry points into the U.S.

“This summer, an average of 60 to 70 families were waiting in line to present themselves at the Nogales port of entry to apply for asylum. Earlier this year, U.S. Customs and Border Protection (CBP) officers only allowed six people per day to apply for asylum at this and other ports of entry, leaving behind a long lineup of families on the Mexican side.”

MCC partners with Frontera de Cristo (Border of Christ), which supports livelihoods of women living at the Mexico-U.S. border and advocates for migrants’ rights. MCC also is supplying additional funding to Casa de los Amigos (House of Friends) in Mexico to provide emergency shelter, legal and psychological counselling and medical care to 30 to 50 especially vulnerable migrants referred by the United Nations High Commissioner for Refugees and government agencies.

Some asylum seekers grow frustrated with the wait and cross between those entry points, said Alexander. Until recently, those people could ask for asylum when they were apprehended by CBP agents. But on Nov. 9, 2018, President Donald Trump signed a 90-day presidential proclamation that restricts asylum rights of those crossing between ports of entry.

“The Trump administration also has deployed more than 5,000 active duty military troops to the U.S.-Mexico border, in response to the caravans, and is threatening to build tent cities on military bases to hold asylum seekers, including families, indefinitely and suspend aid to Central American countries,” Alexander said.

MCC U.S. Washington Office is encouraging people of faith to ask their legislators to oppose the military action, tent cities and a request to extend the border wall between Mexico and the U.S. by voting against these expenditures in the Fiscal Year 2019 spending bill. Learn more about this advocacy.

“Barbed wire and border walls won’t stop people fleeing poverty and violence,” Alexander said. “If we want to reduce the number of asylum seekers coming to the U.S., we should invest, instead, in programs that help people stay in their home communities.”

MCC support in the U.S.

Asylum seekers who are approved for entry into the U.S. near Tucson, Arizona, might stay at Casa Alitas (House of Little Wings), a respite house supported by West Coast MCC. There they can rest and make plans for next steps. Recently MCC U.S. gave Casa Alitas a $20,000 grant to help provide transportation for asylum seekers who need to reach relatives and friends.

Because there is such a backlog in U.S. immigration courts, asylum seekers often live in the U.S. for a few years before they get an official hearing where their long-term status is determined. To plead their cases, many will need legal advice from non-profit agencies. MCC has trained more than 800 people, many who work for these non-profits, about the complicated web of U.S. immigration laws.

“As we see the needs increasing on asylum-seeking families,” Padilla said, “MCC will continue to increase training opportunities and support for organizations and partners working with these populations in need of trustworthy and low-cost legal services.”

Daniel said he expects to enter the U.S. without official permission. He recognizes that it violates U.S. law to do this (a misdemeanor for a first crossing), but he sees it as a necessary step he must take for his family.

“We just want to get there, work and make a little money before we return to our country. It’s not that we want to spend our whole lives in North America. We know that it (the U.S.) is a country with lots of employment opportunities.”

Daniel said that God has been his companion on the way through Mexico.

“I have seen God’s hand over me and over many of the other immigrants, protecting them and keeping them from harm, from any harms along the way – thieves, accidents, violence. Thanks to him I am here, and trusting in him, we’ll make it up north.”

Learn more about MCC’s work with migrants and returning migrants in Central America and with immigrants in the U.S.