What's New
Leading through the trauma of covid: Part two...
Ask God which town
Where to from here?
CCMBC National Director attends 2022 ICOMB Summit
MCC Canada and MCC Manitoba sell shared property...
The world appears to be growing darker
Sharing a new and unified language
6 reasons to attend the MWC Global Assembly...
One too many
Just one more
Home MB HeraldHomepage Margaret’s great gift: she loves these “drugging youth” 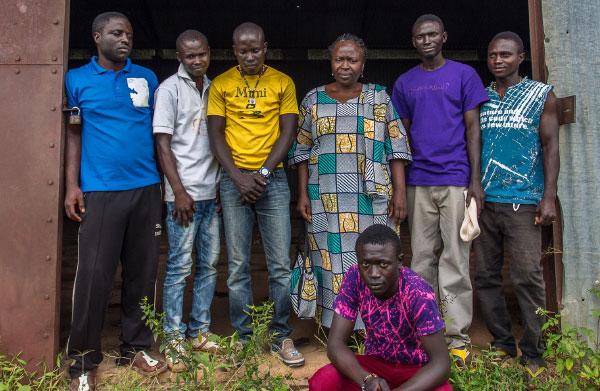 Several former drug users pose with Home Makers executive director Margaret Ahmed (centre), in front
of the warehouse where they used to go to use drugs. (MCC Photo/David Klassen)

It was three days before Christmas 2011 when Margaret Ahmed walked into a drug den and declared this to a group of young men, some of whom were high.

Ahmed’s house in Jos, Nigeria, was a few hundred yards from the former cotton-ginning warehouse where as many as 100 Christian and Muslim youth would gather. She feared for the safety of her two teenage daughters.

In this totally strange and unfamiliar environment, Ahmed, who is rarely at a loss for words, was speechless, until that startling invitation fell from her mouth.

As she continued, talking about their feelings of hopelessness, she caught the attention of more youth. She asked them if they wanted to learn some skills that could give them something useful to do with their lives.

To start, she told them, she would bring them Christmas dinner. They agreed on 2 p.m. Christmas Day. She returned home, feeling gratified and excited that she had followed through on a conviction she had been considering for more than a year.

Her desire to do something to help the youth grew out of her experience at West Africa Peacebuilding Institute in September 2011. Mennonite Central Committee (MCC) paid for her to attend to strengthen her peacebuilding skills.

Ahmed is executive director for Home Makers, an MCC Nigeria partner that has worked with 2,300 women across Nigeria and other West African countries, empowering them with small business skills needed to upport their families. She uses her new understanding of interfaith togetherness and other peacebuilding skills to address the root causes of the violence that has wracked Jos since 2001.

At the peacebuilding institute, she watched the film, “The Worst Slum in the World,” which talked about the Kibera slum in Nairobi, Kenya. In the film, a woman worked with youth who were using drugs and was able to impact their lives, giving them hope for their futures.

When Ahmed returned, she kept thinking about the film and her own challenges from these “drugging youth,” as she called them, until the day she resolved to engage the youth herself.

The youth at the warehouse were skeptical about this unusual visitor, so they determined to find out what was really behind the visit of “Mommy.”

They suspected she was a front for a security clearance operation, but a community leader assured them that Ahmed was genuine and had no devious intentions.

On Christmas Day, Ahmed did not go to church. She worked all morning preparing food for 50 people – rice, chicken, cake, soft drinks, water and trimmings. By 1:30 p.m., Ahmed returned to the warehouse, which the young men had “cleaned” by brushing the feces to one corner. Ahmed carried the food into thewarehouse and prayed for God’s grace to manage the smell and the flies.

When the youth saw Ahmed and the food she was carrying, some of them wept as they started to understand that this might be genuine generosity and love with no hidden agenda. They had never experienced anything like this before.

Ahmed has met with these youth more than 120 times since. She determined that if she were going to make a difference in the lives of these children of God, it would demand a heavy commitment on her part.

They tell her that when she is with them, their desire to do drugs is reduced. She loves them without judgement, they say, unlike society or even the church.

At least 40 youth have quit drugs, Ahmed said, and some of them have influenced young men in a nearby town to stop using too.

The former users learn new skills or return to studies at university and a nursing school. One supports himself by farming on land he rents.

The Bible is a critical piece of Home Makers’ drug addiction program. Ahmed engages the youth through Scripture to show the value of life and hope for the future. Besides the skills she has introduced to the young men, Bible studies are part of her weekly program.

—This story is reported by David Klassen as told to him by Margaret Ahmed. David is MCC representative in Nigeria. His wife, Mary Lou, is a peace studies lecturer. They are from Kitchener, Ont., where they attend Stirling Mennonite Church.