What's New
Through the conflict, life carries on in Ukraine
A FOCUS on Mission
Must Patience Be So Slow?
Harold Jantz: A Heart for the Mennonite Story
Lorlie Barkman: A Life of Creative Engagement
Last Days, First Days
Women in Ministry: Bertha Dyck
January Moment in Prayer “Holy Spirit—Fill Us!”
The Church as the Patient Body of Christ
Advent: Making Much of Jesus: Christmas Day
Home Arts & Culture IJM president puts feet to peace 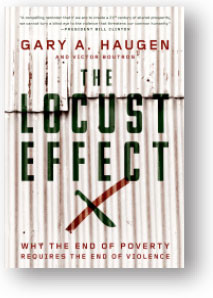 The Locust Effect: Why the End of Poverty Requires the End of Violence

There’s an epidemic destroying billions of our impoverished global neighbours, Gary Haugen argues in The Locust Effect – a plague of violence. The International Justice Mission president’s conviction that the end of poverty requires the end of violence could have come by way of Anabaptist theology but it didn’t. It emerged when, as director of the UN investigation into the Rwandan genocide, he sifted through massacre sites in excruciating detail.

Haugen put his faith to work by founding the global human rights agency International Justice Mission (IJM) in 1997. IJM partners with law enforcement to rescue thousands of victims of violence and bring the perpetrators to justice. Drawing from his work in Rwanda and with IJM, Haugen’s latest book relates personal and penetrating stories of the problems of everyday violence and transforming stories of hope.

Haugen’s book probes beneath the surface of global poverty into the hidden underworld of everyday violence – rape, forced labour, illegal detention, land theft, police abuse and other brutality – that, in some locations, has become routine and relentless. During the 2011 armed conflict in Eastern Congo, for example, sexual assaults against women were “at the stunning rate of 48 rapes every hour.”

For two decades, Haugen and his colleagues at IJM have spent their days walking with the poor and oppressed, supporting victims of violent abuse and oppression in cities and villages across Africa, Latin America, South Asia and Southeast Asia. The product of what IJM has learned, the book challenges the world to understand global poverty and what to do about violence and its “locust effect.”

The breadth and depth of the statistics and stories gleaned from thousands of individual cases in so many countries makes this book a truly unique and valuable contribution in the field of international development and relief. Statistics detailing the scale of slavery in the modern world (best estimate: 27 million) are accompanied by personal stories and photos (e.g. Mariamma) that illustrate how millions of people lured into and held in slavery in places like India, even when slavery is against the law.

The book challenges the way most people think of global poverty – both in terms of perceived problems and proposed solutions. For example, when we think of global poverty, we readily identify needs like food, healthcare, education, clean water and housing. But how many people and policymakers give much thought to global poor people’s chronic vulnerability to violence that consistently frustrates and blocks the climb out of poverty? “We simply do not think of poverty in this way – even among the experts,” Haugen observes. Reduction of violence is not even one of the Millennium Development Goals (the framework for galvanizing the world’s response to global poverty).

Throughout the pages of The Locust Effect, Haugen uncovers the often hidden impact of violence. Why, for example, in places like South Asia and sub-Saharan Africa does girls’ enrollment in school decline sharply as they hit adolescence? A significant but rarely mentioned factor is that school is the most common place where sexual violence occurs; parents want to protect their daughters from it.

Gary Haugen is a Christian but his book is aimed at a broad audience. His faith perspective is less explicit than in his previous books. Yet many of the people and organizations he refers to (e.g., Paz y Esperanza) are Christians serving in the name of Christ. Readers familiar with the prophet Habakkuk’s lament about the locust effect of the violence and injustice in his day will rightly hear strong prophetic overtones in Haugen’s call to defend the cause of the poor and vulnerable in our day. Indeed, there were many times Haugen’s stories and statistics helped me to hear the prophets’ (and Jesus’) frequent appeal for justice with new clarity and depth.

Haugen’s book also affirms the importance of the work of peacemaking and justice that I saw our sister churches in Colombia so deeply engaged in when I visited there with a Mennonite Central Committee learning tour in 2013.

One of the pastor couples we stayed with in Colombia, David and Marina Bonilla, were later targeted by gang violence in their neighbourhood and have since been forced to leave the El Progreso church and school they started 10 years ago. A recent MCC Global Family update noted several parents of children at that school have been killed and others “forced to move into other neighborhoods in order to save their lives.”

I read Haugen’s book with interest in large part because I was hoping to better understand what it is like for people like the Bonillas and their church in Cazucá to live and work in a neighbourhood where they face the daily threat of violence. What is most needful and doable is for each congregation to walk with at least one sister church in our global family and learn to do justice together. The main strength of Haugen’s book is that it helps us understand why this is so urgently needed and understand how we can work together for greater justice and peace.

Anabaptists respond to violence and displacement in DR...