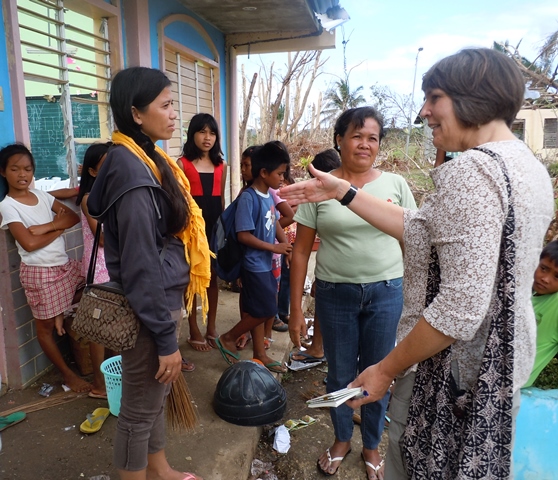 Jeanne Jantzi, right, talks with teachers Janett Yubal, left, and Selvia Luna, centre, about their experience with Typhoon Haiyan. Community members took shelter in the Dalinding village elementary school on the island of Cebu, until the winds blew away large swaths of roof. PHOTO: Dan Jantzi

After Typhoon Haiyan devastated parts of the Philippines in early November, Mennonite Central Committee (MCC) turned to the local community to guide its response.

In the first week, MCC partnered with Church World Service (CWS) to provide $200,000 for emergency food and household items. CWS has staff in the Philippines who work with village leaders to respond to a disaster.

“The village representatives know their village. They know the households. They know which organizations have promised what,” said Estaban (Bong) Masagca, who is doing assessment with CWS.

Soon after the typhoon, MCC also partnered with Peacebuilders Community, Inc. (PBCI) to send a team to the city of Ormoc on Leyte Island. They met with local pastors and community leaders to determine the needs and to help them manage their own disaster recovery. PBCI is a local Filipino organization and a ministry of Mennonite Church Canada Witness.

Working with the input of local leaders results in more efficient, fair and peaceful distribution of supplies, says Jeanne Jantzi, MCC area director for Southeast Asia along with her husband, Dan Jantzi.

“Disasters don’t just happen in a vacuum,” Jeanne Jantzi says. “The destruction that we see in the Philippines is layered on top of the local reality. The typhoon-affected area of the Philippines has also been an area with significant conflict for many years.

“In our experience, the more MCC’s partners can involve local communities in planning and implementing their own disaster responses, the more the potential for conflict is reduced,” Jantzi says.

Before Typhoon Haiyan, MCC partnered with PBCI in a three-year training program in disaster risk reduction, including ways to reduce violent conflict.

Joji Pantoja, chief operations officer of PBCI and a Mennonite Church Canada worker, told the Jantzis how they used the training after Typhoon Pablo in December 2012.

After the disaster, rebel groups barricaded roads to seize relief goods because they lived in the mountains and their villages were ignored in government assessments for relief supplies, Pantoja says. So PBCI team members helped connect rebels and their communities through local congregations.

PBCI then made agreements with the government to allow them to carry in relief supplies to these communities without military escort. They made sure disaster relief was extended to all people, regardless of political affiliation, says Pantoja.

Beyond the initial $200,000 commitment, MCC will consult with partners to determine how further donations will be used for both short- and long-term recovery.