The many facets of service 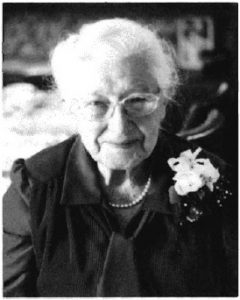 Katherine (Schroeder) Willms, also known as Aunt Tina to her nieces and nephews, and others who know her well, was born August 26, 1899 in Russia to John K. and Katherine Schroeder. In 1903, when she was four years old, the family immigrated to Canada. They settled on a farm in southern Saskatchewan, near Main Centre. The family attended the MB Church.

On October 23, 1923 she married Jacob F. Willems of the Waldheim/Brotherfield community. Her recollection of the wedding ceremony gives us a contrast between then and now:

“At our wedding. two ministers preached their sermons. We didn’t just stand up for a short ceremony. It always paid to sit down on chairs in those days. The way it is now, it hardly pays to dress up for such a little while. There were no attendants and the father did not take in the bride. The bridal couple came in together and went out together.

“Our wedding was an afternoon service with two ministers. The choir sang for us. This was followed by a lunch, which we had prepared at home and brought to church. After the ceremony and lunch we returned to the sanctuary for a lengthy program of singing and recitations …. ”

The newly married young couple purchased a farm in the Waldheim area and moved onto it. Mrs. Willems reminisces:

“The farm houses in those days were not built so warm, so it was very cold in winter. Many times there was ice in the water pail in the morning. So I had to get up early, at 4:30 am to heat the house, then go to help chore, get breakfast ready, pack school lunches and see that the children were ready for school.”

Mrs. Willems was a mother of 12 children. The children witnessed her work from early till late. She had a cheerful disposition and was not daunted by difficult circumstances. Most work situations were met confidently and methodically, forging ahead until the task was completed. She was frequently heard singing while she worked.

The Willems’ were quite involved in the Brotherfield MB Church. In winter they would often be the first ones to arrive at the very cold church building.

“Heating the church when it was 30 ° F below zero was difficult. The church had been cold for most of the week so Sunday morning the fires had to be lit very early. All the wood and coal had to be carried from the woodshed. Everybody came to church in winter.

Mrs. Willems fondly remembers winter Bibelstunde, which took place during the day and lasted usually for four or five days. She relates that there was discussion for an hour or so before lunch, and then a study session in the afternoon. The attenders would go back to their homes for supper and later return to church for an evening service. These were precious times in the small church.

Conference time was also a special occasion for Mrs. Willems. Especially the time that the Canadian convention was held in Brotherfield. She recalls:

“When the conference was in Brotherfield we set up more cookstoves. We had a few in our church summer kitchen. We’d cook borscht, chicken noodle soup and pluma moos. Long tables were set up inside the church and in the tent ‘lean-t o’ which was attached to the church. We ‘d bake our own pies and buns. We would bring milk and butter. Sometimes we brought cheese, sausage, coffee and sugar cubes. We served our guests breakfast at home. We all had lunch and dinner at church.”

There were many people to be housed at such an event. Mrs. Willems remembers:

“All our strawticks we re fill ed and covered with sheets and blankets. All households, in those days, had lots of pillows and homemade woollen blankets.

“Seven guests in a home was common.”

Another highlight for Mrs. Willems was the Diugenten Kurses. These “music courses” were held during mid or late July, for one w eek. Many choirs came together for singing and conducting instruction. Most choir members learned to conduct basic patterns. For the final night a mass choir would perform for a large audience. Some of these courses were held in conjunction with a Saengerfest.

In 1976 her husband Jacob died. Mrs. Willems left the farm and moved into a suite in the Waldheim retirement home. Here she keeps house and pursues a busy schedule with family, friends and community affairs. She has been and continues to be a pillar in the Brotherfield church.

She is a living example of the loving work and care that has gone into the foundation of the Mennonite Brethren church in Brotherfield, in Saskatchewan and in Canada.

Fresh wind in the sails: Missions conference given...