What's New
Ask God which town
Where to from here?
CCMBC National Director attends 2022 ICOMB Summit
MCC Canada and MCC Manitoba sell shared property...
The world appears to be growing darker
Sharing a new and unified language
6 reasons to attend the MWC Global Assembly...
One too many
Just one more
A safe place in Winnipeg
Home News Fresh wind in the sails: Missions conference given renewed mandate

Fresh wind in the sails: Missions conference given renewed mandate

In the midst of celebrating “60 years of harvest,” the interchurch Waldheim (Sask.) Missions Conference stopped to ask whether to “sow” at all next year. The board held a ballot vote, asking attendees to choose whether to close down the conference permanently at the end of the anniversary event, or task the board with revamping the conference format by taking a more modern approach. It was a sobering challenge, as leaders urged participants to provide a clear mandate for the future of the conference. 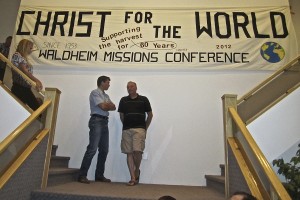 The annual conference, held July 27–Aug. 1, 2012, is planned by volunteers from
Waldheim (including Waldheim MB Church) and surrounding communities.

This year’s five-day event featured the songs and stories of Juno-award-winning musician Steve Bell, and plenary addresses by Jay Moon (professor of intercultural studies at Sioux Falls Seminary in South Dakota). The conference was ably presided over by native son Ralph Gliege, who first attended as a youth.

Moon challenged listeners to expand their vision – “to trade in our 4×6 frames for 10×12 frames, so we can see more of what God is doing in the world today.”

Gliege turned the daily offering into a participatory event with a special children’s challenge to raise $150 for two years of pastor training in Mexico. An old tin wheelbarrow loudly received the children’s loonies and toonies on Monday and Tuesday, then Wednesday’s “silent offering” of $5 bills, for a total of just over $450 in three nights.

And the adults did just as well. As part of his opening statement, the board chair challenged attendees, averaging 300 each night, to raise $60,000 for the 60th. (The conference budget was $33,000.) Gliege invited Reg Friesen – a Waldheim Missions Conference “elder statesman” who has attended almost all of the 60 annual festivals – to be the first to see the total offering: in excess of $63,000. The resounding applause that followed was as near to worship as any hymn or worship song.

As for the vote: near-unanimous support for fresh vision and continued meeting. Five new members were added to the existing four for a full board, with most between ages 20 and 50. The new board’s happy but challenging tasks include figuring out how to steward the unexpected funds and where to take the conference in the future.

—Waldo Berg, on behalf of Waldheim Missions Conference board