Leeda is retiree’s labour of love 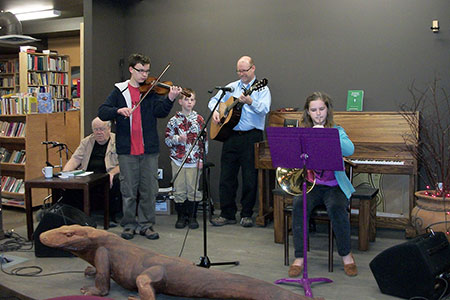 After a full career teaching elementary and junior high, retiree John C. Klassen is working to leave another legacy. “Translating songs into Plautdietsch is an ideal retirement project for me,” says Klassen who has experience in orchestral performance, music arranging (Ziffern notation), and choir direction. “It could become whatever I wanted it to be. No one else had done much of this before.”

He launched his second project, Plautdietsch Ewanjellische Leeda, at Sam’s Place (MCC Manitoba’s community bookstore, café, and event venue) in Winnipeg, Jan. 18. Musicians and singers from several generations of Klassen’s family regaled the audience of 18 with the sound of music as a blizzard raged outside.

“In the last decade, with the Plautdietsch Bible translation, a renewed interest [in Low German] has developed.” His Low German songbook of hymns and new songs for four voices is only one of his projects to create worship resources in the heart-language of the many Low German speaking Mennonites found in Germany (Umsiedler), South America, and increasingly in Canada (particularly in Ontario and Alberta).

In the 1960s, “I saw a need for providing songs in Plautdietsch for the Low German broadcast [at Gospel Light Hour (now Family Life Network)],” says Klassen. He added his musical expertise to J.J. Neufeld’s translations published as 14 Plautdietsche Leeda, but family, career, and the waning of Low German in Canada drew him away from subsequent projects.

Over the years, more songs were produced; however, “Some well-meaning translators had the linguistic skills but failed at things like metre, pulse, and iambic rhythm,” says Klassen. 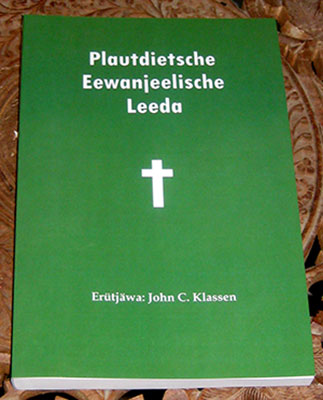 After several years volunteering as music teachers in Paraguay, Klassen and his wife Bertha relearned the language of their childhood and were ready for this project. “I have the combination of musical interest and familiarity with music theory, harmony, and counterpoint, plus practical experience with singing groups to do this job of providing Plautdietsch songs.”

Together with FLN’s Low Germany ministries director Jacob Funk, with the aid of Ed Zacharias’ bestselling Die Bibel, Klassen translated selections from the German Evangeliums Lieder, and composed new songs for Plautdietsch Ewanjellische Leeda, added to his previous songbook collections from 1960 and 2004.

The church needs theology more than ever

What a shock to see his obit in the Free Press today. He was such an inspiration to all singers. The legacy he left us will live on and in our voices, John will be dearly remembered and respected.

I’m sad to read this. I loved going to his web site listening to his songs. When I found that there was something in plautdietsch on the web, I was so blessed. I am in my early forties and am learning my mother tongue as well. To have some one that has given us these songs is truely a blessing. I will take comfort and peace in knowing he is with the Lord.

I had the pleasure of being together with John in a Religion Class at the U of M many years ago. I had always enjoyed his songs when he sang with the MB Quartet. I also found his website Plautleet.ca and listened to many of his Low German songs. I believe he had a book os Low German songs printed. Wondering wher and how I could get one of these song books.

Thank you for your interest, John. I will look into this and get back to you.

According to their catalogue, Book 1 is sold out but Book 2 is available from Die Mennonitische Post:
https://mcccanada.ca/sites/mcccanada.ca/files/media/common/documents/2018-2020_book_catalogue.compressed.pdf