What's New
Abortion, the image of God, and faithful witness...
Choosing motherhood: The sacrifice of honouring life
MWC Assembly small but full of joy
Bad back doesn’t hold back MDS volunteer
Transition in CCMBC National Faith and Life Leadership
Leading through the trauma of covid: Part three...
The church distracted: When the main thing is...
Remote wilderness rescue turns into service with MDS...
How open is your mind?
Following Jesus together across barriers
Home News Increased response to urgent needs in Philippines 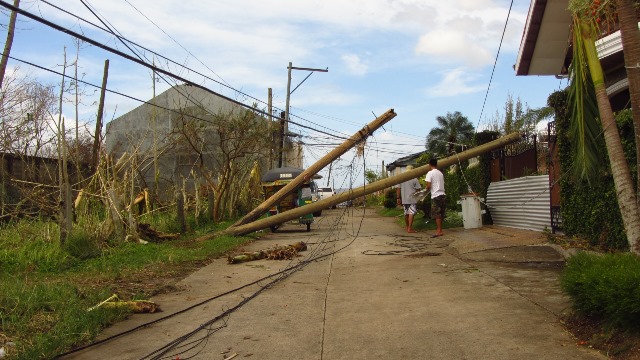 Power facilities in Ormoc City, Leyte province are expected to be down for months after Super Typhoon Haiyan struck the Philippines, Nov. 8, 2013. PHOTO: ACT Alliance/Christian Aid

As the devastation from Typhoon Haiyan continues to unfold in the Philippines, Mennonite Central Committee (MCC) is increasing its response to meet crucial needs for people on the eastern side of Leyte Island and working with partners to assess next steps for relief and recovery.

This assistance will focus on Dulag, Tolosa, and Tabontabon municipalities, which are south of the city of Tacloban.

“We’ve seen and heard so much about Tacloban in the media. There are many other affected areas where assistance is not yet being provided,” said Bruce Guenther, MCC’s director of disaster response.

Dan and Jeanne Jantzi, MCC’s area directors for southeast Asia based in Thailand, are currently in Cebu City, Philippines, meeting with MCC partners who have returned from affected areas and are helping to shape MCC’s next steps in relief.

In addition to emergency food packages, MCC support will provide items such as bath soap, detergent, towels, pails for carrying water, dippers for bucket showers, and malongs – traditional tube skirts that can be used as a towel, sheet, clothing for men or women or a baby hammock. Priority will be given to single-parent or child-headed households and households with pregnant or nursing mothers, children under two, the elderly, and people with disabilities.

Some 675 people were killed in Dulag and Tolosa, according to the Philippines National Disaster Risk Reduction and Management Council. Almost all of the homes in Dulag were destroyed, and power and water had not been restored by Monday. Schools in Tolosa that had been identified as evacuation centres were badly hit by the typhoon. Tabontabon, while slightly farther from the coast, incurred severe damage as well and, as a small municipality, had attracted little attention from humanitarian organizations.

Food is a critical need and important for ensuring peace within the affected communities, according to the Jantzis.

On Nov. 19, 2013, the Jantzis are scheduled to accompany CWS officials to damaged areas in northern Cebu. The Jantzis also will continue meeting with partners in Cebu City, which has become a hub for typhoon relief, to assess needs and plan next steps for MCC’s response.

The Jantzis stress that as partners work to determine what is being provided through other channels MCC’s future plans remain fluid and will be adjusted to meet the greatest needs in areas where MCC is at work.