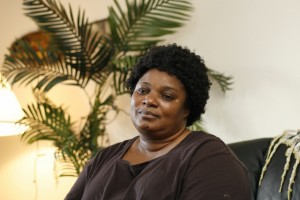 It is not unusual for Leonie Mandeba Lwamba to wake up from a recurring and distressing nightmare. The images in her dreams are not fictitious – they are images of a family friend killing her mother in 1994 during the violent conflicts in Zaire, now the Democratic Republic of Congo.

“The man who killed our mother used to come to our house and eat at our table,” she said. “I still have great difficulty trusting people.”

Loving support from the Mount Royal Mennonite Church in Saskatoon is helping Lwamba deal with this horrific memory, along with other painful memories of violence in Zaire and her escape to a refugee camp in Kenya.

“People love me and encourage me – [one couple who served with MCC in West Africa] are like my parents, they are like my relatives,” she said. “I don’t want to ever move away from here.”

Lwamba and five children, ages three to 14, arrived in Saskatoon in March 2004. They were sponsored by the Mount Royal Mennonite Church through MCC’s refugee assistance program. Lwamba was a teacher in DR Congo and her husband Stephen was the school principal.

Fearing for her life after her mother was killed, Lwamba’s pastor helped her escape to a refugee camp in Kenya, where she lived for nearly eight years.

The Mount Royal Mennonite Church heard about the family when Lwamba’s brothers, Michael, Fabian, and Aliston, founders of an award-winning Canadian gospel group, Krystaal, performed in the church. The brothers ran for their lives following the student massacre at the Lubumbashi University in 1989 and were miraculously reunited in Canada.
Lwamba was excited to hear that her application for refugee status in Canada had been accepted and that she would soon be reunited with her brothers. But four days after arriving in Canada, her oldest son died from sickle cell anemia – a traumatic event she finds too painful to talk about.

Although she is happy with her life in Canada she is disappointed that her husband is still trying to meet the requirements for Canada’s private sponsorship program. He lost his refugee status when he returned to DR Congo to assist his parents.

When she looks at a photograph of her husband, taken by an MCC worker, she dreams of their future together in Saskatoon – a future that she hopes will make it possible for them to buy a house and provide a university education for their children.

Mennonite churches in Canada, through MCC, have helped about 50,000 refugees resettle in Canada under the country’s private sponsorship program started in 1979.