What's New
Delete or not to delete, that is the...
Believers bring water for drought baptism
Encouragement to those in the arena
Keeping attention and making an impact: A few...
Open hands to reconciliation
From the editor
Approaching truth and reconciliation with love in our...
MB Seminary offers new MA in Transformational Leadership...
Multiply August Ukraine Updates
Book Review of Return Stroke: Essays & Memoir...
Home News Honouring Alan Kurdi 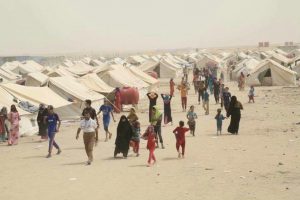 Displaced people in Iraq. (Photo courtesy of Afkar Society for Development and Relief)

On September 2, 2015, the heartbreaking picture of Alan Kurdi’s body on the shores of the Mediterranean Sea was a wake-up call to the world. The three-year-old boy’s death was a tragic reminder of the desperate choices made daily by some Syrians as they flee conflict in their country. Like the Kurdi family, they risk piling into unsafe boats piloted by smugglers in an attempt to find a safe haven.

Alan, his brother and mother, didn’t make it to safety. A year later, we remember the Kurdi family in our thoughts and prayers. We pray for all of the people who are forced from their homes and families by conflict or disaster. We grieve with these families as they mourn missing and lost loved ones.

Alan Kurdi’s death evoked shock and sadness around the world; in Canada, it prompted an outpouring of support for displaced Syrians. Churches, groups of friends, entire communities came together to sponsor Syrian refugees.

At MCC Canada – where we have been involved in refugee resettlement for more than 35 years – the impact has been profound.

In the nine months between September of last year and the end of June 2016, we have assisted in the arrival of almost 1,100 refugees. That’s about 10 times higher than the annual average since 2010.*

Brian Dyck is the Migration and Resettlement Coordinator at MCC Canada. He works with our provincial offices on refugee sponsorship and also chairs the Sponsorship Agreement Holder Association in Canada. 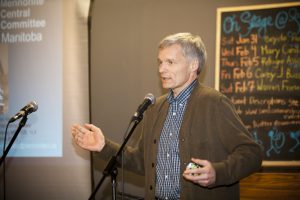 Brian Dyck at an event hosted by MCC Manitoba where constituents and others interested in resettlement heard from young people who came to Canada as refugees. (MCC photo/Alison Ralph)

Brian spoke to MCC Canada writer, Julie Bell, about the events of the past year.

Julie: Why do you think that picture of Alan Kurdi had such an impact on people?

Brian: I remember thinking during that week, and talking to others, and we were all saying, “What is it about this event, this particular photo that resonates so much with people?” At the beginning of 2015, the Immigration Minister in Canada made the commitment to bring in 10,000 Syrians and we at MCC in Canada, but also a lot of other sponsoring groups across Canada, began to hear from people. People said, this is important, let’s do something about this. And I think September, and that picture, was really a turning point. You know, there is something about water, about people getting on leaky boats. It’s a dangerous place, the open sea. It seems so desperate. So people said, okay, this is the moment. This is the time.

And for me, it’s also about my faith. As a Christian I want to respond to people in need. It is what I am called to be and do. So, when people come to MCC offering to help, we say we hear your compassion, we know that you care, and we scramble to respond to that.

Julie: What reasons are people giving when they talk about refuge sponsorship?

Brian: People have been telling us, “You know the problem is huge, and I can’t solve all of it. But I can do this one thing and make a difference.” There is a multiplier effect I think when people see what others are doing, and they say “we can do that too.” And when you put all of those people together, it does add up. I think this is the way that MCC Canada’s sponsorship program began in 1979 when Southeast Asians were settled in large numbers. Or in the mid-90s during the former Yugoslavia situation. All of a sudden there’s an event, or a tipping point, and people who have no connection with refugees say, “I want to be involved in supporting refugee resettlement.”

Julie: Alan Kurdi’s death really put the focus on Syrian refugees specifically. Was this a challenge for MCC?

Brian: Last November, when the new government took over in Canada, their focus was very much on Syria and they committed to bringing in 25,000 Syrian refugees. That was a significant number. And Canadians were focussed on that too. But as time has gone on, people like me who work in resettlement have constantly said, we cannot forget that this is not the only urgent situation in the world. And the exciting thing about this for me, for a lot of us, is that while there is a huge demand for Syrians, a lot of other populations have also been sponsored. People are saying, “I understand it’s difficult to sponsor a Syrian family right now, so what else can we do?” The result has been that Congolese and Eritreans and Liberians and others are being sponsored.

Julie: Any other challenges?

Brian: Well, we are also trying to direct the good will of people in ways that we think will be the most helpful. We do respond to our constituents and that’s important. They are MCC. So if they want to be involved in refugee resettlement, we help with that. But we also say, you know, there are people who don’t want to come to Canada and they need support too. We talk about our humanitarian assistance work around the world and the difference that makes to displaced people. Getting the balance right is always a challenge.

Julie: Many Canadians can trace their roots back to other countries; our families may have been in Canada for only a few generations….

Brian: Yes, 21 or 22 percent of the people living in Canada right now were not born here.

Julie:  So, when you think about the new Canadians who are arriving, do you feel as if you are involved in some sort of social phenomenon or change?

Brian: I think we are all involved in that. And that’s one of the conversations going on now with the Canadian government. They are consulting widely on Canada’s future in immigration, what our levels and the mix should be. What we are talking about, what a lot of groups are talking about, is a shift from a policy that is weighted towards economic immigration (people selected for their skills and ability to contribute to Canada’s economy) and more towards family reunification and humanitarian immigration. The conversation about how humanitarian immigration is actually good for us in Canada is exciting.

Julie: In Europe, there have been ongoing discussions about closing borders to newcomers. In Britain, immigration played a role in the Brexit vote. Some people even link immigration with terrorism. Do you wonder if all that will have an impact on the views in Canada?

Brian: I think that the situation in Europe is different for a number of reasons. Those fleeing there to claim asylum have self-selected. European countries have to deal with anyone who has shown up at their borders because, like Canada, they’ve signed the 1951 United Nations refugee convention. But, because of our distance from conflict regions, we don’t have as many people coming here whom we must consider. The other thing is that for very long time, Canada’s immigration policy has focussed on integration. European immigration has not. I don’t live there, so I don’t know the context. But I’ve heard the former United Nations Commissioner for Refugees, Antonio Guterres talk about this. He talked about the guest worker program, where Europe needed more workers and brought in people from all over the world. These people didn’t get a path to citizenship and the message to them was you are just a guest worker, not a member of our community.  So getting back to our Christian faith, and considering Canada’s immigration policy, for us it is about building community. Making sure that we do that is really important.

Julie: Tell more about that.

Brian: Well, as Paul talks about in the second chapter of Ephesians, our goal is to break down dividing walls. Sometimes that means we are inviting people into our community with troubled pasts, who have seen terrible things and may not cope very well at times. It’s not always easy. And yet people continue to offer support for refugees.  I have talked to church groups, or other groups, that have had challenges with the people they sponsored as they make the transition to life in Canada. These groups talk about those difficulties, and yet they go on to say “we’re thinking about sponsoring another family.” I am so impressed and amazed by that.

Julie: Have you seen a new awareness, or a more animated discussion about resettlement issues in the past year?

Brian: Yes, and I think there are a number of reasons for that. One is that the numbers are bigger than ever, at least since the Second World War if you include internally displaced people. You also have protracted situations that are not being resolved, in Somalia and Afghanistan for example. So some governments are saying we need to get at the root causes of these things. The other thing I think is that it’s hit in a personal way or closer to home for some of us. In the past these large numbers happened in Kenya, Pakistan, Iran and other places. But now we are seeing displaced people in Europe for example, and it’s becoming more of an issue.

Julie: If we could press fast-forward, if you could imagine us talking a few years from now, what is your biggest hope in terms of the work that MCC does?

Brian: My vision is that there will no longer be forced displacement. But how do we get to that? People are leaving for a reason, complicated reasons. It can be anything from political situations, to corruption in a place, to economic reasons. We at MCC have always talked about these things, and we’ve talked about our development work. But I think there’s energy to talk about these things now with other non-governmental agencies and the Canadian government. And so helping our constituents understand how we can respond in a holistic way, how all of the pieces we need to bring together can happen, so people don’t have to leave. This is what I think about. It helps me stay focussed on not just what’s on my desk at the moment, or the latest crisis. I think about the bigger picture and a time when no one is forced to leave their home or country.

*About 850 of the refugees who arrived between September 2015 and June 2016 were Syrian. Yearly averages after 2012 are affected by caps on new refugee applications set by the Canadian government.

—Julie Bell is a writer for MCC Canada.

Read how MB churches have responded: They’re part of our family now

My God help all refugees and the world iam refugees to here in South Africa we refugees we living by your. On