What's New
A FOCUS on Mission
Must Patience Be So Slow?
Harold Jantz: A Heart for the Mennonite Story
Lorlie Barkman: A Life of Creative Engagement
Last Days, First Days
Women in Ministry: Bertha Dyck
January Moment in Prayer “Holy Spirit—Fill Us!”
The Church as the Patient Body of Christ
Advent: Making Much of Jesus: Christmas Day
Advent: Making Much of Jesus: Fourth Advent
Home News Ground broken for B.C. Mennonite museum

Preserving stories for generations to come 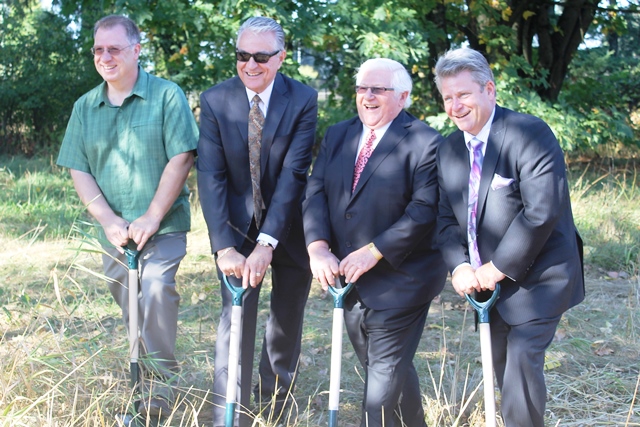 With ground officially broken Sept. 4, 2014, Mennonites in the Fraser Valley will soon have a permanent place to tell their story. Construction has begun on a Mennonite Heritage Museum and Agricultural Education Centre on the south end of Clearbrook Road in Abbotsford, B.C., just off Highway 1.

“Groundbreaking is not just about digging dirt,” said Abbotsford mayor Bruce Banman before the sod was turned over; “it symbolizes growth and progress.” Banman cited his own Mennonite heritage and said he hoped the new building would be a place for people to “grow culturally and spiritually and a place to engage with friends and family.”

The museum was the brainchild of Peter Redekop of Richmond, B.C., president of the Mennonite Museum Society (MMS). Redekop, whose family immigrated to Canada in 1948, had been inspired by Mennonite heritage and historical museums in other locations in the United States and Canada.

Plans for the museum began in November 2011 and received City of Abbotsford approval in March 2014.

The two-storey museum will tell the Anabaptist story from 16th century to today through a variety of media – including permanent and travelling displays and audiovisual and interactive digital media – with specific focus on the Mennonites who came to the area 80 years ago via Poland/Prussia and Russia. A bookstore, gift shop, demonstration kitchen and coffee shop will be included in the museum, and the building will also house the archive library of the Mennonite Historical Society of B.C.

Another feature will be the agricultural exhibit on the grounds adjacent to the museum building. Agriculture has played an important part in Mennonite life through the centuries and has been central to Mennonites’ success in the Fraser Valley. Exhibits will illustrate ways in which Mennonites have historically used agriculture, whether through farming as livelihood or helping to feed the world’s hungry.

—Amy Dueckman, B.C. correspondent for the Canadian Mennonite where this article first appeared.