What's New
A FOCUS on Mission
Must Patience Be So Slow?
Harold Jantz: A Heart for the Mennonite Story
Lorlie Barkman: A Life of Creative Engagement
Last Days, First Days
Women in Ministry: Bertha Dyck
January Moment in Prayer “Holy Spirit—Fill Us!”
The Church as the Patient Body of Christ
Advent: Making Much of Jesus: Christmas Day
Advent: Making Much of Jesus: Fourth Advent
Home News Grace after the storm

Grace after the storm 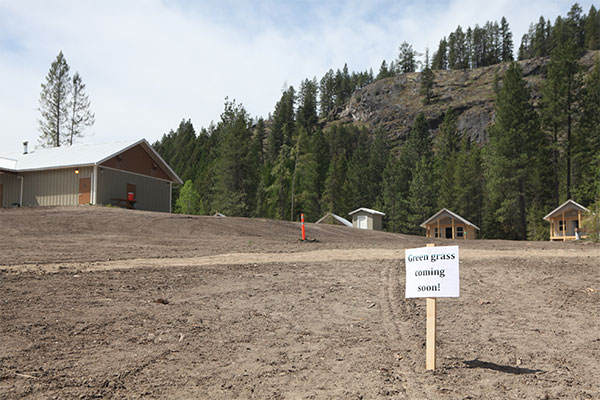 A sign of hope greets visitors as the Pines camping season nears. It doesn’t look like it did before the windstorm, but director Gene Krahn says after all the redesign work, “it really is beautiful.”

The 2013 Pines camping season is underway, perhaps amazingly. Thanks to B.C. MB church families, other local churches, community supporters, and staff, Pines Bible Camp, Grand Forks, B.C., has risen from the devastation of the freak windstorm that truncated the 2012 season July 20.

People prayed, contributed dollars, and came to labour – from all over B.C. Krahn says the prayers for the camp and for the family of 11-year-old Richard Fehr, who died in the storm, were overwhelming.

Camp executive director Gene Krahn says wind made the camp look like a forest clearcut. “The landmarks are all gone.”

It has been a year of emotional struggle for many, especially those in nearby Grand Forks whose lives or childhood were rooted in the Pines experience. It’s especially true for members of Gospel Chapel who started the camp 50 years ago and made it their main outreach for many decades.

The storm toppled tall evergreens like matchsticks. Workers had to clear the wreckage in the 8-acre campsite, falling any tree that looked unsafe.

There wasn’t a building without a tree on it. Nine new cabins had to be built to replace those that were ruined. Five buildings, situated among trees no longer there, were moved because the new landscape made no sense. The campsite was redesigned.

“We are a family and this is just an indication of that fact,” says Krahn.

On Aug. 4, the Pines will observe its 50th anniversary. In the meantime, “Please keep sending help. We still need it,” says Krahn. “We’re exhausted!”

He knows it will be an emotional summer for many, but the Pines is open. “We haven’t stopped.”

Tragedy among the trees