What's New
Through the conflict, life carries on in Ukraine
A FOCUS on Mission
Must Patience Be So Slow?
Harold Jantz: A Heart for the Mennonite Story
Lorlie Barkman: A Life of Creative Engagement
Last Days, First Days
Women in Ministry: Bertha Dyck
January Moment in Prayer “Holy Spirit—Fill Us!”
The Church as the Patient Body of Christ
Advent: Making Much of Jesus: Christmas Day
Home News Freedom from fear: a prayer for Syria 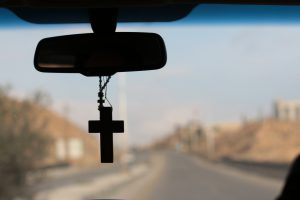 On the drive from the Syrian border up to Homs.

I’m sitting in a black van, parked on the side of the highway in Syria. As I look out the window at the windswept evergreen trees that line this stretch of road, I can feel a little bit of fear growing inside of me.

I’ve heard so much about Syria on the news the last seven years. The bombings, chemical weapons, ISIS takeovers and refugees fleeing. Now I’m inside Syria with a group of MCC colleagues to visit our programs; it feels surreal to be here in this country still at war.

When fear or anxiety start to creep in I repeat this prayer to myself in time with my breath, “Fill me with your love oh Lord, and free me from fear.”

I repeat it when we’re first driving into the country past empty billboards, unfinished buildings, past tanks on the side of the road. I repeat it when we drive past a military convoy on the highway. I repeat it when I’m trying to fall asleep and hear shelling in the distance in Aleppo, and again when we hear the bombardment of Eastern Ghouta from our hotel in Damascus.

“Fill me with your love oh Lord, and free me from fear.”

On our one-week journey inside Syria, I had immense trust in the local partner organizations that planned our trip. I knew they had taken every effort to keep us safe. Yet Syria is in the middle of a war. I walked through blocks and blocks of bombed buildings and I heard the fighting in the distance. Even with the best precautions things could change in an instant.

“Fill me with your love oh Lord, and free me from fear.”

As a writer for MCC, I’ve been reading about and reporting on Syria over the last five years. I’ve always been amazed by the courage of the local groups we partner with, providing relief to their communities while facing immense dangers themselves. Now having visited some of that work in person I have a deeper appreciation of the difficult circumstances Syrians face and greater admiration for the faith and hope that keeps them moving forward.

Months later now, I still think a lot about the people we met. People affected by the conflict and people working to provide relief. My prayers have shifted, no longer about me and my fear, but a prayer for peace and hope for Syria.

The strength of our local partners

One day we split into small groups to hear from people who’ve been displaced and receive monthly food packages from MCC.  I meet with five different families, some living in a shelter attached to an abandoned factory, others renting what used to be a farm building for animals.

It’s uncomfortable to enter these spaces as a privileged outsider—I was carrying an expensive camera, wanting to hear their stories and asking to take photos. Yet many people appreciated the visit from Canadians and Americans as a sign the world hadn’t forgotten them.

I felt in awe of the scale of need and displacement. In one morning in just two villages I met family after family who had lost their homes and their family members. I know there are many more villages and towns just like these across the country.

I was reminded that in many places it’s local Syrians carrying out the relief work that MCC supports. Rahaf Abdo, our guide and translator for one morning, grew up in Deir Attieh and now works for the Islamic Charity of Deir Attieh helping with the distributions. She started out as a volunteer but gave up a job lecturing at the nearby university to do relief work full time.

As we drove between villages she shared some of her own story. Deir Attieh was taken over by ISIS in 2013. Rahaf remembers hiding from fighting in the basement of her parents’ house, their neighbours joining them for shelter. Her fiancé still went out to help deliver the food packages during that time, he was nearly killed several times. Though Deir Attieh is no long under siege, Rahaf lives with the fear of that experience. She also feels a stronger desire to do good. “Sometimes I think I can’t live here anymore. I get panic attacks because of what I’ve seen,” she says. “But then I think I’m helping people.”

Determination in the middle of destruction

In Homs we meet Sister Valentine, an 85-year-old nun who works at a seniors’ home run by the Evangelical Presbyterian church. In early 2017 the residence was on the line between the Syrian government army and rebel fighters. We go up onto the roof where you can see the walls of the laundry room that bear the bullet holes of fighting between the two sides.

Sister Valentine told us how she stayed put throughout the fighting. To try and protect other staff she insisted they stay inside, going out herself with one other person to get food. When the siege was over, she gathered everyone together and asked them to decide if they wanted to stay or go. “After five minutes I came back,” she shared, “and I said to them, what have you decided? I decided to stay, and I will stay even if there is no one with me.” They all decided to stay.

As we toured Homs that afternoon it became clear just how difficult that decision must have been. We drove and walked through parts of the city that had been levelled by the fighting. Blocks upon blocks upon blocks were completely uninhabitable.

When we were able to get out and walk we saw remnants of the lives lost or left behind. A pink child’s shoe lying next to a pile of debris. A women’s coat, belt and purse. Couch cushions and furniture. One of our partners taps me on the shoulder and points up towards a chandelier still attached to the ceiling on the top floor of a building, the floors below collapsed into a pile of rubble. Though the floor is gone, the kitchen cupboards and counter are still attached to the wall, dirty dishes are visible sitting next to the sink.

The strength of churches

On Sunday morning I worship with the National Presbyterian Church of Aleppo. Sitting in the front row I can let the melody of the Lord’s prayer in Arabic wash over me. Despite seven years of war the pews in the church are full.  In fact, the church’s pastor Rev. Ibrahim Nseir tells us the conflict made the church stronger and encouraged some people to return to their faith.

Rev. Nseir takes us to the site of the former church building in the old city of Damascus. All that’s left is a pile of rubble after it was struck twice in 2012. He even points out the rocket that did some of the damage, sitting under some sheet metal a few feet away. The building may have crumbled, but the church has stayed strong — continuing to provide both physical relief and hope to people throughout the crisis.

He also shows us a store room filled with MCC relief supplies ready to be distributed by the church. A pile of comforters lovingly stitched in Western Europe, and stacks of relief kits – buckets filled with essential supplies like towels and soap.

Along with the physical relief supplies they receive, Rev. Nseir says he and his community have been encouraged by the prayers of people from around the world. “We always knew that we were not alone,” he says, asking that people of faith continue to keep Syria in their prayers.

“Pray that God’s grace should continue over these people,” he says. “Please pray for peace in Syria, pray for smiles to come back to faces.”

We heard similar messages from another partner the Syrian Orthodox Church. When we had the opportunity to visit Bishop Selwanos Boutros Alnemeh’s church in Homs, he asked us to each light a candle and to pray for peace in Syria.

One evening we ate supper with several members of the Syrian Orthodox Church, they asked us “Weren’t you scared to come to Syria?” While it would be naïve to say none of us felt fear, Rick Cober Bauman, Executive Director of MCC Canada, summed up our feelings well when he said, “Even though we feel fearful we also know we don’t need to fear because you invited us.”

Who better to guide us than the partners who have been living with this fear and violence for so long and have not just survived but continued to reach out to those around them.

At the end of our week, after our vans drove back across the border from Syria into Lebanon, the reality of our visit began to settle in. The emotions I’d been keeping inside crept closer to the surface, it felt like my heart was suddenly too close to my skin. I felt the sadness of the destruction, I felt the sorrow at all the loss, I felt the hope of our partners and the fears I had avoided.

Back in Beirut I was startled by the sound of doors slamming, reminded of the bombs I heard falling just hours before. For weeks afterwards, I was finely tuned to the sound of jets flying overhead. They took me back to an afternoon in Damascus when I heard planes flying low followed by blasts in the distance. Blasts that made the doors of the church slam and the walls shake.

Two months later, my life has mostly returned to normal. But I know that returning to peace and safety is a privilege our partners in Syria don’t have. As I read the news of continued fighting I think of all the people I met who will hear those bombs falling. I think of the last words that one of the Syrian Orthodox Bishops, Bishop Matta, said to me as I got into the vehicle to leave, “Remember us in your prayers,” he asked.

I do. And I hope you will too.

Fill Syria with your love, oh Lord and free it from fear.

Emily Loewen is Digital Content Coordinator for MCC, based in Winnipeg, Manitoba.