Faith on the Hill

An MCC Ottawa Office intern reflects on God and Government 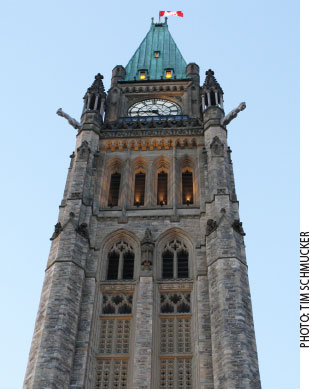 If you were to turn on the television today and catch a clip on Canadian political debate, you would likely see a disheartening display of partisanship, negativity, and false speech. It might come as no surprise, then, that almost 40 percent of Canadians decided not to vote in our last federal election. Why bother? In the same vein, as Christians, we may wonder, “Is this really a government that’s been ‘established by God’?” (Romans 13:1).

This fall, I spent four months working in Ottawa as MCC’s advocacy research intern. Despite being what I would call a politically engaged person (I did my undergrad in political science), I often found myself asking these same questions.

Government footage on television and in the news usually comes from a session called Question Period, held once a day when the House of Commons is sitting. Picture this: about 300 adults shouting at each other, calling each other names, and pounding their fists on tables. Or, as some call it: “political debate.” It’s meant to give opposition parties a chance to hold the government accountable; whether this is actually accomplished is up for debate. In a recent study published by Samara Canada, one MP was quoted as saying that Question Period is “the greatest embarrassment, and one of the reasons politicians are frowned upon.” Another described it as “kids in a sandbox.”

As the MCC Ottawa Office intern, I had several opportunities to observe this political “sandbox” live from the House of Commons’ public gallery. After attending these sessions, I was often left feeling total despair about the place of God in our political system.

Unexpectedly, however, God transformed these moments of despair. On one occasion, exiting the gallery into one of the House’s many long, stone-walled hallways, I was met with a flood of tinted light – a sunset streaming through the stained glass windows at the end of the hall. In that moment, God was telling me once again: “I will never leave you nor forsake you” (Deuteronomy 31:6).

This moment is what veteran Christian newspaper reporter Lloyd Mackey might call “finding God in an unexpected place.” Now semi-retired, Mackey has had an extensive writing career, much of which has been focused on the intersections between politics and Christian faith. As we sat down together for coffee one morning, he told me that his life in Ottawa has been about not merely reporting the news, but looking for God in places where we might not expect to find him.

During my internship with MCC, I have seen partisan politics override thoughtful decision making; important issues ignored by the majority of politicians; and political culture thirsting for scandals, corruption, and the next big gaffe.

But just like beams of light streaming through stained glass windows, there have also been rays of hope: MPs from all parties joining together, determined to find solutions to poverty; a senator sharing his Christian faith in front of hundreds of citizens; an MCC worker testifying before a Senate committee about the true nature of loving one’s neighbour. Through these moments, I have come to know God better, and learned to see him even in the most unexpected places.

—Casey van Wensem is a recent graduate of the University of Victoria, where he studied political science and professional writing. While he was the MCC Ottawa Office’s advocacy research intern, September–December 2012, he attended The Journey (MB church). He lives in Victoria with his wife Amy and their hedgehog Herbie.
MCC OttawaViewpoint
0 comment

Prayer: Who answers whom?